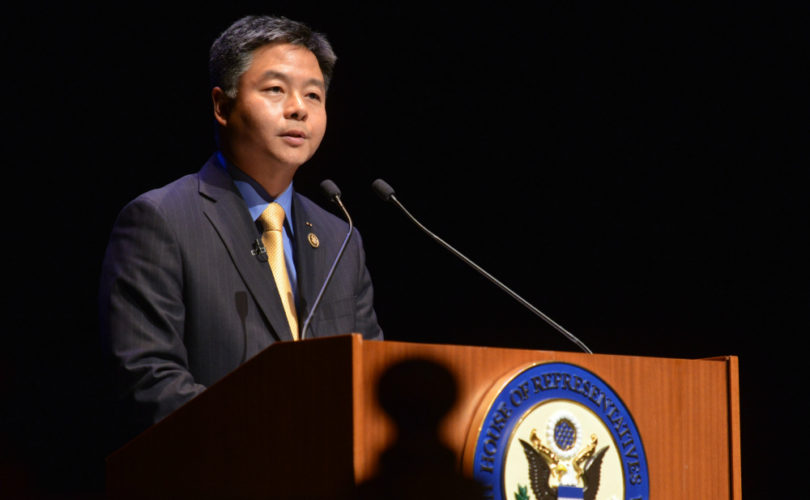 WASHINGTON, D.C., May 19, 2015 (LifeSiteNews.com) – A California congressman who has said he supports an “attack on parental rights” has introduced a controversial bill that would ban all therapy to assist people struggling with unwanted feelings of same-sex attraction or gender confusion.

Rep. Ted Lieu, D-CA, announced that he sought the national ban through the Therapeutic Fraud Prevention Act at a press conference today.

The bill would instruct the Federal Trade Commission (FTC) to classify as fraud any attempt to counsel or advertise counseling aimed at reducing homosexual attraction or feelings of gender dysphoria, “including efforts to change behaviors or gender expressions.”

“Three years after I authored the first statewide ban on conversion therapy in California, I am proud to introduce legislation on the federal level to combat this abusive practice,” said Congressman Lieu. “The truth is that being LGBT cannot be and does not need to be cured.”

When then-state Sen. Lieu introduced his bill barring all counseling to reduce homosexual attraction among California's minors, parents accused him of assaulting their rights and the choices of their children.

“The attack on parental rights is exactly the whole point of the bill,” Lieu said in response.

The national bill goes further, instituting a full nationwide ban for people of all ages on both homosexual and transgender emotions.

A handful of Congressmen, all Democrats, have endorsed the legislation, including House Minority Leader Nancy Pelosi, D-San Francisco.

Pelosi said such therapy, even if sought out by a consenting adult, “assaults the humanity of countless children and adults. It’s not right. And it must be stopped.”

President Obama has also called for barring minors from such therapy nationwide. Through his spokeswoman, Valerie Jarrett, Obama said, “As part of our dedication to protecting America's youth, this administration supports efforts to ban the use of conversion therapy for minors.”

Lieu, one of the few Democrats for whom President Barack Obama campaigned during the conservative backlash of the 2014 midterm elections, welcomed the sentiment.

“I am ecstatic that the leader of the free world has called for an end to gay ‘conversion’ therapy. And I commend President Obama for recognizing ‘reparative’ therapy for the crappery that it is,” Lieu told a California-based homosexual website.

The move comes just one day after Oregon became the third state to bar minors from seeking reparative therapy, joining California and New Jersey, as well as the District of Columbia. Oregon's bisexual governor, Kate Brown, signed H.B. 2307 on Monday.

Since regulating therapeutic practices has largely been left to the states, Lieu admits his office is trying to understand how to enforce a ban in all 50 states.

Lieu's office said the bill, which was written in partnership with the Southern Poverty Law Center, “contains important protections for religious liberty and freedom of speech.”

His efforts build upon those of another California Democrat, Jackie Speier, who reintroduced the “Stop Harming Our Kids” Resolution, a non-binding motion to condemn reparative therapy, last month.

Speier wrote a letter asking the Federal Trade Commission (FTC) to analyze whether reparative therapy was “deceptive” and to prosecute its practitioners for “making dangerous, scientifically invalid claims.”

However, the therapy's practitioners – and patients – say it is Lieu and the Democrats who are misguided.

Stephen Black, a former homosexual who is with the Restored Hope Network, told the Illinois Family Institute that banning so-called “conversion therapy” amounts to “a form of child abuse.” Often, homosexual feelings are caused by molestation and continue to link the victim to his or her abuser.

“It would be tragic not to allow someone to have self-determination,” Black said.