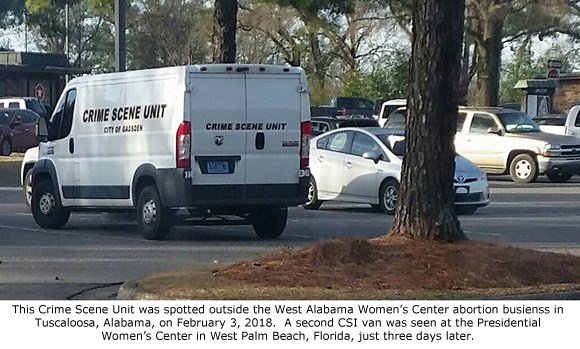 TUSCALOOSA, Alabama (Operation Rescue) – Somewhat of a mystery has developed over the past few days as a second group of pro-life activists describe the presence of Crime Scene Investigation van at their local abortion facility.

Last week, Operation Rescue reported on the presence of a Palm Beach County Crime Scene unit at Presidential Women’s Center in West Palm Beach, Florida, on February 6, 2018. It was unclear why the unit was dispatched to that abortion facility, but given the fact that PWC was referred to the State Attorney General’s office by the U.S. House Select Investigative Panel on Infant Lives for illegally trafficking in aborted baby remains, it raised hopes the Crime Scene unit was gathering evidence in that case.

Since then, pro-life activists in Tuscaloosa, Alabama, told Operation Rescue that a similar Crime Scene unit was seen at the West Alabama Women’s Center abortion facility on February 3, 2018.

However, additional details emerging from the Tuscaloosa incident may shed more light on why Crime Scene Units have now been spotted at two abortion businesses in two states within days of each other.

The van at the Tuscaloosa abortion business was from the City of Gadsden, which is about 120 miles from Tuscaloosa. Pro-life activists also noticed that one of the two CSI officers that entered the abortion facility carried a small Styrofoam cooler in and out of the facility.

It is possible that the Crime Scene Investigators were collecting evidence related to a sexual assault on an underage girl that took place in Gadsden, which resulted in a pregnancy, and tragically, an abortion. Many states are required to preserve the remains of babies aborted in these circumstances for DNA testing so that the rapist can be positively identified and brought to justice.

Nevertheless, it is a rare occurrence to spot a Crime Scene Unit at an abortion facility, and to have two sightings within days of each other is exceptionally rare.

“The mystery has certainly deepened. We don’t actually know why these crimes scene officers visited the two abortion facilities. It seems to be an unlikely coincidence. But one thing is sure; abortion businesses have been known to break the law, and having a CSI van out front of abortion facilities sends just that message,” said Troy Newman, President of Operation Rescue. “One need only read the House Select Panel’s criminal referral of Presidential Women’s Center to understand the criminal influences within the Abortion Cartel.”