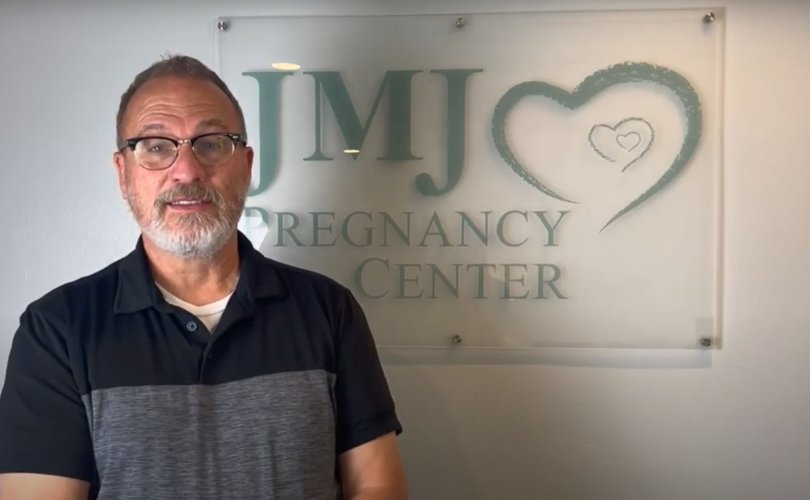 (LifeSiteNews) — A Catholic crisis pregnancy center in Florida is continuing its pro-life mission after facing damage from the recent hurricane and despite their pro-abortion competition remaining open.

JMJ Pregnancy Center “supports the God-given right of every pregnant woman to give birth and the right of every unborn child to be born,” despite strategic censorship of their advertising and major hurricane damage to one of the centers. Meanwhile, the Planned Parenthood facility across the street incurred little damage and continues to be praised by mainstream media as legitimate “health care.”

“We do believe that what JMJ does is so opposite of what our media in the United States portrays, because we really do walk with these moms that are in this crisis,” Robert Perron, the center’s executive director, told LifeSiteNews in a phone interview. “We not only walk with them. we give them options that nobody else is giving them and we promise to be with them as we go through this journey.”

The apostolate has three locations in central Florida and provides services that include free pregnancy tests and ultrasounds, medical care for expecting mothers, and a Lifting Lives program to “provide unconditional love and support and give families hope in the light of darkness” during and after pregnancy.

However, the ministry’s dedicated work has been hindered by the recent hurricane that swept through the state.

According to Chloé Battle, JMJ’s director of operations, the three locations were visited as soon as the weather allowed them to assess the damage. Although two of the centers sustained manageable harm, the Kissimmee location was flooded.

Battle then explained that she went across the street to the Planned Parenthood facility, which had not been impaired in any way that would force the organization to close its doors for repairs.

“That’s when we decided we have got to put together a hurricane relief fund because we’ve got to get this center open and operational,” she said. “Starting Monday morning, they’re going to be handing out the abortion pill again.”

Perron added that the flooded location is the ministry’s medical clinic, “where we have six doctors who were seeing moms on a regular basis as we journeyed with them. And so that’s shut down.”

In addition to the hurricane damage, the JMJ apostolate is also facing censorship from internet platforms and search engines.

“We do a thing called digital sidewalk counseling, and basically what that is, is when moms have searched for pregnancy tests or abortion or anything like that, we have ads that go up that … give them [women] the option to come to JMJ to get a free pregnancy test and ultrasound,” Perron explained. “That’s been very effective for moms that come in to learn more. Those are getting blocked, on Yelp in particular.”

He said that search results for the pregnancy center include a “disclaimer that’s absolutely not true,” stating that the center may not offer trained medical assistance.

According to Perron, the apostolate was founded 32 years ago “by two Catholic women who were standing outside of abortion clinics here in Orlando and praying.” Frances Murray and Ann Drolet decided to open a clinic where they could take pregnant women and “help give them other life affirming options.”

Last year, JMJ “had over 4,000 appointments” and “over 900 babies were born because of the work our staff has done.”

Both Perron and Battle expressed their passion for the future goal of offering housing and helping women to find safe places to live during and after their crisis pregnancies.

“The hurricane has been a setback,” Perron said. “But we know that God has been part of this all the way through and that we will get reopened.”

In addition to prayer, a LifeFunder has been launched to gather donations for repairs so all three of the clinics can continue their lifesaving work.