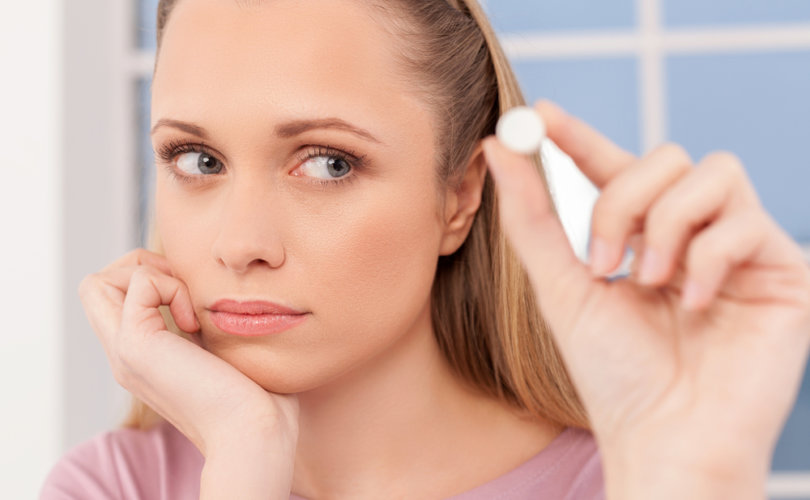 December 11, 2019 (LifeSiteNews) – A leading crisis pregnancy support organization filed a brief in federal court Tuesday to defend a North Dakota law that requires women seeking chemical abortions to be told about the possibility of reversing the abortion pill’s effects.

This summer, the American Medical Association (AMA) and Center for Reproductive Rights (CRR) filed a lawsuit against North Dakota’s recently-enacted law requiring abortionists to inform pregnant women that it may be possible to reverse a chemical abortion. That law was supposed to take effect in August. The suit also challenges a current requirement that women be told that abortion ends the “life of a whole, separate, unique living human being.”

The abortion pill mifepristone (better known as RU-486) works by blocking the natural hormone progesterone that developing babies require to survive. Abortion pill reversal (APR) consists of administering extra progesterone to counteract mifepristone’s effects, ideally within 24 hours of taking the abortion pill. Its pioneers credit it with helping more than 400 women save their babies since 2007.

AMA and CRR sued on behalf of the North Dakota abortion facility Red River Women’s Clinic, claiming that APR is “wholly unsupported by the best, most reliable evidence,” and that the state “compels medical providers to convey a controversial and ideological message about fetal personhood that is unmoored from medical science.” (In fact, there is overwhelming scientific consensus affirming the state’s language about the preborn.)

Among the brief’s counter-arguments is that the pro-abortion suit draws a false equivalency between mandates to dispense certain medical information and the sort of requirements certain states have tried to impose on pregnancy centers, the latter of which the U.S. Supreme Court struck down in NIFLA v. Becerra.

“The NIFLA decision guarantees that Heartbeat and its members cannot be forced to speak a message unrelated to the medical services they provide; at the same time, it ensures that women undergoing abortion (or any other medical procedure) will be protected by longstanding canons of medical ethics requiring that they be told about the risks, alternatives, and consequences of the procedure,” it explains. “This Court’s proper consideration of NIFLA is necessary to safeguard the pregnant women who will be hearing the Human Being Disclosure and APR Disclosure before consenting to a life-altering medical procedure — women who may soon be contacting Heartbeat for information, medical treatment, or support.”

“It is an established scientific fact that the life of every human being — with his or her own unique DNA and all other building blocks of life — starts at the moment of conception,” ADF senior counsel Kevin Theriot said. “It is North Dakota’s prerogative if it wishes to ensure that women know about that as well as about the existence of promising medical procedures available to her if she chooses to reverse the chemical abortion process. A woman who is informed about the many dangerous risks of abortion, the reality of what the abortion will do to her child and to herself, and her options as a parent is far more likely to make a wise decision concerning her health and her child’s life.”

APR’s foes recently attempted to discredit the technique again by seizing upon a study out of the University of California at Davis, which was cut short after it failed to attract a large pool of participants, then saw three women hospitalized for vaginal bleeding. But pro-lifers argue that a closer look at the details paints a different picture, Catholic News Agency reported.

All three of the hospitalized women had been given mifepristone, but only one had been given progesterone, Dr. Tara Sander Lee of the Charlotte Lozier Institute noted. “Long before this study was published, it was a known fact that Mifeprex (brand name of mifepristone) can cause serious and sometimes fatal infections, excessive bleeding, and incomplete termination requiring follow-up surgery. This study does nothing but further prove these serious, life-threatening risks when taking the abortion pill.”

Abortion pill reversal’s detractors often label the technique “junk science,” but as pro-life OB/GYN Dr. William Lile has explained, APR is based on principles that are well understood from progesterone’s common, FDA-approved use in a variety of other pregnancy-related situations.