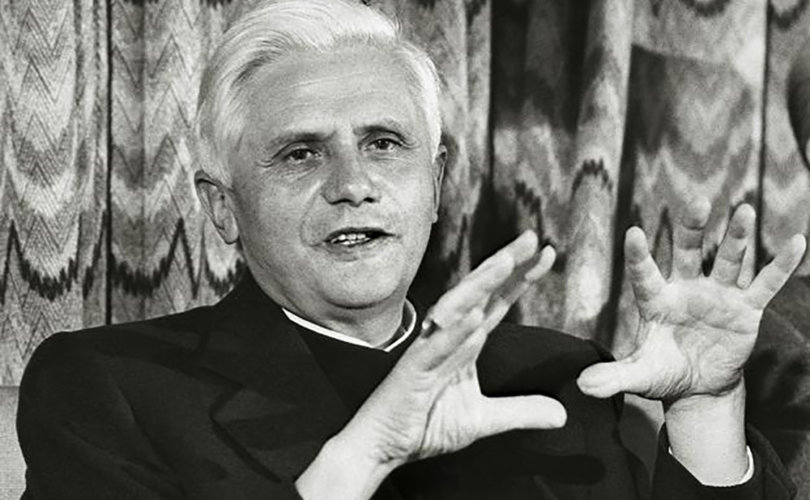 October 9, 2017 (LifeSiteNews.com) – The future Pope Benedict XVI warned In the early 1970s that popes might make “pronouncements” that were inconsistent with the Catholic Church’s authentic and historic doctrine, which would necessitate “criticism” of those pronouncements.

The statements, which were made thirty-three years before Joseph Raztinger became a pope, were republished in 2009, four years after he became the Supreme Pontiff of the Catholic Church.

“The faith is based on the objective data of Scripture and of dogma, which in dark times can also frighteningly disappear from the consciousness of the greater part of Christianity (statistically), without losing in any way, however, their obligatory and binding character,” Fr. Joseph Ratzinger noted in 1972.

In such cases the pope should “go against statistics” that indicate the popularity of false teachings, “and this will have to be done as decisively as the testimony of tradition is clear,” Ratzinger wrote.

“On the contrary, criticism of papal pronouncements will be possible and even necessary, to the extent that they lack support in Scripture and the Creed, that is, in the faith of the whole Church,” he added.

Ratzinger held that even an “ultimate binding decision” by the pope wouldn’t be valid if there was “no clear evidence from the sources” of Catholic doctrine.

“When neither the consensus of the whole Church is had, nor clear evidence from the sources is available, an ultimate binding decision is not possible. Were one formally to take place, the conditions for such an act would be lacking, and hence the question would have to be raised concerning its legitimacy,” he wrote.

The passages were written as part of a work entitled “Das neue Volk Gottes” (“The New People of God”), published in 1972 and republished in an anthology of his works, “Fede, ragione, verità e amore” (Faith, reason, truth, and love”) in 2009, after Ratzinger had become pope. The words were translated into English for a recent post in the widely-read blog Rorate Caeli.

The quotes have been revealed amid a flurry of accusations of impiety and disobedience hurled against the signers of the “Filial Correction” of Pope Francis, which seeks to publicly correct the pope regarding several “heresies” that the Correction accuses him of having taught in his apostolic exhortation Amoris Laetitia, regarding the nature of sin and the possibility of receiving Holy Communion while in a state of mortal sin.

The Vicar General of Opus Dei, an association of the Catholic faithful with global reach and influence, has accused the signers of the Filial Correction of “attacking the pope” by correcting him publicly, a sentiment that is shared by Robert Fastiggi, a theologian and seminary professor. The chief spokesman for the signers, Joseph Shaw, has noted that private attempts to correct the pope have been met with silence, and that the Code of Canon Law speaks of a “duty” of the faithful to sometimes make their opinions known to other Catholics.

Similar accusations have been made against the four cardinals who submitted five questions or “dubia” to Pope Francis in late 2016, asking him for a clarification of certain points in Amoris Laetitia.

Cardinal Burke: Pope Benedict restored the ‘correct order and beauty’ to the liturgy

Pope Benedict’s secretary: Communion for divorced and remarried is ‘impossible’

Pope Benedict speaks: Renunciation of truth is ‘lethal to faith’

Pope Benedict XVI says Church is ‘on the verge of capsizing’