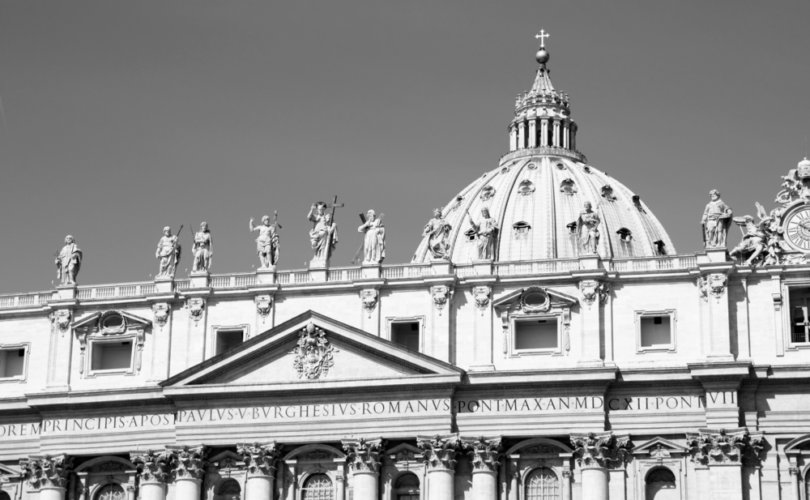 ENGLAND, September 25, 2017 (LifeSiteNews) — Catholic intellectuals criticizing the “filial correction” of Pope Francis largely have no real arguments against the main claim that he is propagating heresy, only ad hominem attacks against the signers, said Dr. Joseph Shaw, one of the organizers of the correction, to LifeSiteNews.

More than 60 clergy and lay scholars issued on the weekend what they called a “Filial Correction” to Pope Francis for “propagating heresy.” They asserted that the Pope has supported heretical positions about marriage, moral life, and the Eucharist that are causing a host of “heresies and other errors” to spread throughout the Catholic Church.

But critics have attempted to downplay the correction, arguing that the 62 signers are largely obscure figures, that there was too small of a number of signers to make any significant impact, that there are no cardinals backing the letter, and that the letter itself is filled with lies and hypocrisy.

“The first reaction I had after reading the document concerned the signatories,” said Richard Gaillardetz, a theologian at Boston College, to National Catholic Reporter. “The prominence given to the number of signatories … masks the fact that these are really marginal figures.”

Villanova University theologian and historian Massimo Faggioli also downplayed the letter by stating that it has “no cardinal and no bishop, in a Catholic Church that has more than 200 cardinals and more than 5,000 bishops.”

British Catholic author Stephen Walford said the signers’ accusation of the pope propagating heresy “is based around claims the Holy Father has never made — lies essentially — and a massive dose of hypocrisy.”

After accusing the signers of hypocrisy and lying, Walford interestingly went on to say that “vitriol and judgmentalism aimed at those who are loyal to Pope Francis … are the fruits of the evil one, and they will never bring forth a restoration of a golden age that never existed.”

Papal biographer Austen Ivereigh tweeted that the correction “will be ignored” since the “magisterium doesn't bow to middle-class lobbies.”

Italian vaticanist Marco Tosatti noted that in the articles critical of the correction, one “element which is rigorously missing” is the “evaluation whether what is said in the formal correction makes sense or doesn’t. “

Shaw addressed his critics’ arguments, one by one. He said that when it comes to faith and morals, it’s not numbers that matter, but truth.

The Church is not only a divine institution, he said, but also a “rational institution,” adding that the views that have prevailed historically in controversial theological debates are usually those which have the “best arguments.”

“It’s not the view with the most powerful supporters, or the view that has the most money behind it [that has prevailed historically in theological debates],” he said. “It’s the view where one side can’t answer certain questions, and the other side can.”

Shaw noted how at the time of the Arian heresy that rocked the early Church, it was St. Athanasius alone, against a majority of bishops and even the Pope, who kept the true faith. He prevailed in defending the faith of the Apostles by using unbeatable arguments based on apostolic teaching as well as the Bible that Jesus Christ was, in fact, true God and true man, he said.

The same argument that highlights a lack of numbers could also be levied against Christ, who started his ministry with 12 men, most of them obscure and insignificant.

As to no cardinals signing the correction, this was a deliberate move on the part of the organizers, said Shaw.

“We deliberately didn’t approach the dubia cardinals [such as Cardinals Burke and Brandmüller] because we wanted this to be an independent initiative [by the lay-faithful],” he said.

“This is an appeal by academics and pastors at the sharp end of the application of these interpretations of Amoris, academics whose job it is to think these things through and explain them to students and Catholics in general, about how Catholic theology is all supposed to hang together,” he added.

Shaw said critics fall to the level of calling the signers liars and hypocrites because they have no other substantial argument.

“They are conscious of their weakness, and they have nothing to say about the substantive issue at hand,” he said.

Shaw said the substantive issue raised in the filial correction is that Pope Francis’ teaching on marriage and the family, as put forward in his Exhortation Amoris Laetitia, has been used to advance theological concepts and justify pastoral practices that are contrary to previous Catholic teaching as well as to the words of Jesus in the Gospels dealing with adultery as well as divorce and remarriage.

“This is a very serious problem,” he said, adding that he still has yet to encounter a single argument that demonstrates how accepting adultery in the lives of Catholics can be justified using previous Catholic teaching or the Bible.

“They can’t point to an authoritative document that says divorced and remarried Catholics can receive Communion,” he added.

Shaw said the ad hominem attacks against the signers demonstrate that all the talk from the progressive wing within the Church about “openness” and “dialogue” is simply false.

“People who claim to be all about 'openness,' 'dialogue,' 'mercy,' ‘making a mess,’ not sticking 'strictly to rules,' but allowing things to 'develop organically from the grassroots' … when things don’t end up in the way they want, they turn around and say, ‘Oh no, this isn’t authentic, there’s not enough of them,' or 'they're too much grassroots,’ and so forth,” he said.

“It makes one realize that for many of them, all this talk about having a more open-minded or democratic approach to these issues, it was simply tactical,” he continued.

“They don’t really believe in those things at all. They just thought that by saying those things they could get around certain obstacles. And once they got around those obstacles, they would be happy to apply rules in the most stringent way, if they have the power to do that,” he added.

Shaw said that if critics regard the filial correction as an “important issue, which they should, then they need to provide arguments of substance, and not these ad hominem attacks.”

Asked what might happen now that the filial correction has been released publicly, Shaw responded that he hopes that it will assist in “future interventions,” including a rumored forthcoming “formal correction” from the cardinals.

“It certainly clarifies the issues for any such further intervention. Cardinal Burke and others will be able to see the response to this, the kind of support it gets and the kind of arguments that have been used against it. In all these ways, it will assist future interventions,” he said.

“It’s part of a general process of reflection and clarification, which is always necessary for the Church when there is a theological problem. And I do hope it will be of service to the Church and of service to Cardinal Burke in reflecting on what to do next, if anything,” he added.

Shaw also said that even if Pope Francis continues to ignore how his teachings are being used to undermine Catholic morality, the next Pope will not.

“The next Pope is going to access the situation and say what is the future of this approach [as laid out in Amoris Laetitia]. And this [filial correction] is one of the things he is going to take into account,” he said.