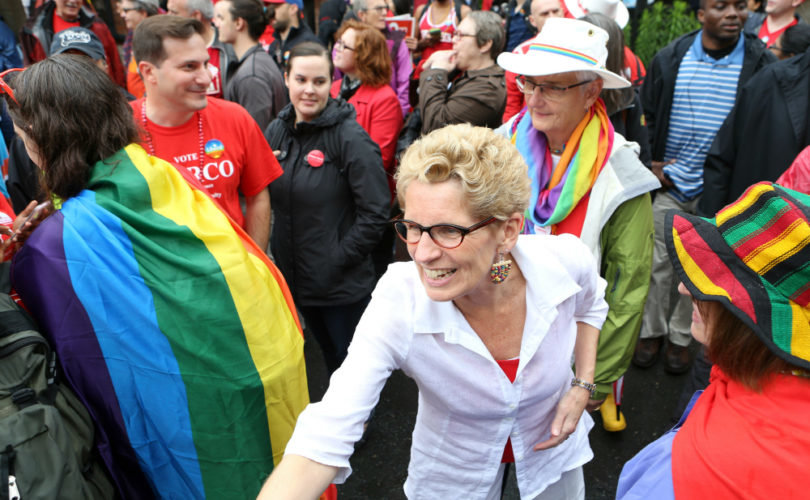 “Clearly, this is a government that is hell-bent on usurping parental rights over the moral education of their own children, and there’s no low it won’t stoop to,” pointed out Jack Fonseca of Campaign Life Coalition.

According to documents LifeSiteNews obtained through a Freedom of Information request, Premier Kathleen Wynne’s Liberal government spent $4 million on a television and online ad campaign that ran concurrent with the sex-ed curriculum September 2015 rollout in all the province’s publicly funded schools.

The Liberals already spent $1.8 million for a summer radio and print campaign to promote the contentious sex-ed program, which since its February 2015 release had provoked increasingly vocal and widespread parental opposition.

The multilingual television campaign featured ads with a young boy staring at a wedding cake for a same-sex couple, and a young girl about to lift up her top to send a “sext.” The campaign targeted ethnic communities with the ads produced in multiple languages, including Somali, Korean, Punjabi, Cantonese, Mandarin, Arabic, Urdu, Farsi and Tagalog.

Critics charge that the sex-ed curriculum violates children’s innocence by introducing them to sexual concepts at inappropriate ages, and that it promotes gender theory by teaching there are six genders rather than two biological sexes.

American doctor and psychiatrist Miriam Grossman denounced the Liberal sex-ed curriculum as “entrenched in ideology” at a presentation in Mississauga in August. Grossman said the sex-ed curriculum’s focus is to “mould your child’s thinking and attitudes so they respect, affirm and are comfortable with all sexual choices and lifestyles.”

According to documents LifeSiteNews obtained, Sandals nixed MPP constituency meetings as part of the campaign, asking in a May 26 email: “Why are we sending out templates that still suggest community meetings are a good idea?”

Her communications director Lauren Tedesco relayed the message that Sandals had “specifically requested the community meeting be removed” from ad templates for MPPs.

“By what authority does the minister of education tell elected MPPs not to hold public meetings on matters of significant public interest?” queried McNaughton in a telephone interview with LifeSiteNews.

“I’ve long been on the record that parents should have been consulted, and they should still be consulted,” pointed out the MPP for Lambton-Kent-Middlesex.

“It is totally unacceptable that Liz Sandals discouraged MPPs from meeting with people they are obliged to represent,” Fonseca said, adding that voters in her Guelph constituency “should start mobilizing right now to call for her resignation.”

He pointed out that Premier Wynne’s government has been dogged by scandals, and caught in deceptions, “including the one where she claimed 4,000 parents were consulted about the curriculum but a Freedom of Information request showed that barely 1,600 people responded to her fraudulent survey.”

“This should also beg a question for Liberal backbench MPPs,” Fonseca noted in an email to LifeSiteNews. “If parents were so comfortable about the curriculum, as Wynne and Sandals have always claimed, why did they need to spend $6.5 million on propaganda?”

In one notable instance, Liberal MPP Bas Balkisson shut down a meeting in March 2015 in Toronto’s east-end community of Scarborough, after parents kept erupting into chants of “We say no!”

About two weeks later, angry parents in Mississauga shouted Wynne down after the premier spontaneously attempted to talk to them outside an ethnic media meet-and-greet.

And in April, Wynne used the fire exit to escape parents who had surrounded a middle school in Thorncliffe Park, a predominantly Muslim community in her Don Valley West constituency.

That community became the center of sex-ed protest, as the Thorncliffe Parents Association spearheaded a May 2015 student boycott that virtually emptied the neighbourhood elementary school, and 35,000 students were pulled from the Toronto public schools.

By June, the Canadian Families Alliance, a grassroots coalition of parents’ rights associations that represented about 200,000 Ontarians had formed, held a rally of 5,000 at Queen’s Park, and presented McNaughton with a petition of 185,000 names, which the MPP introduced to the legislature.

McNaughton says he’s been receiving unsolicited petitions to repeal the sex-ed curriculum “every week,” and he plans to bring those into the legislature soon after it opens February 16 for the spring session.

He estimates there are “well over a quarter-of-a-million signatures, I just don’t know the final count,” he told LifeSiteNews.

“I’m still the only MPP to challenge Kathleen Wynne face-to-face in the House,” McNaughton said, “and I’m assuming that’s why people still send me petitions.”

The Thorncliffe parents went on to stage an unprecedented student strike in September and October of 2015, pulling children from school and teaching them in makeshift classrooms in the nearby park.

Parents rallied outside 103 of the 107 MPP offices on September 2, a province-wide day of protest organized by CLC.

“Ontarians should be outraged that Kathleen Wynne used their own money, and millions of it, to try to whitewash a curriculum they didn’t like,” Fonseca said, adding that the “Wynne/Levin curriculum will quickly evolve over time to become even more radical – and dangerous to children – than it already is.”

“Parents and grandparents across Ontario need to see in this fiasco a reason to redouble their opposition to the sexualization of Ontario’s elementary school children,” he told LifeSiteNews. “Opposition must continue through to the 2018 general election, so that radical sex-ed becomes the main ballot issue.”

McNaughton agrees. “Parents’ voices will be heard,” he said, “whether it’s now or in the 2018 election.”