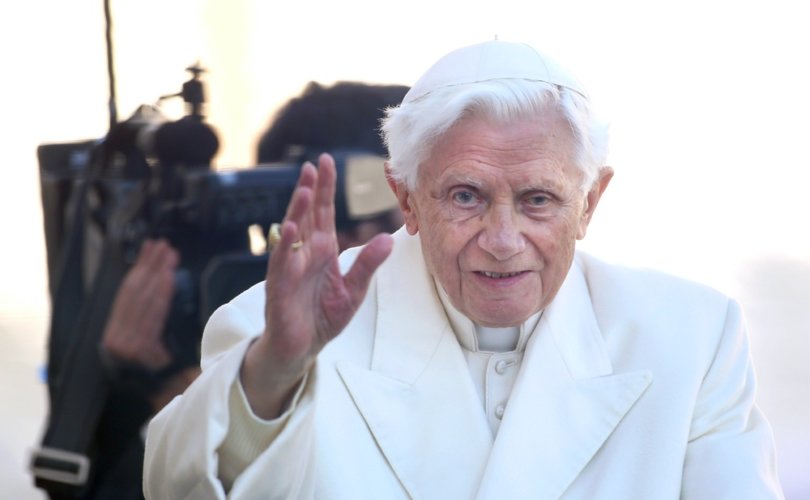 VATICAN CITY, January 13, 2020 (LifeSiteNews) ― Some of Pope Emeritus Benedict XVI’s most vociferous critics are reacting passionately on social media to the news that he and a leading cardinal have written a book together defending priestly celibacy.

Yesterday a French newspaper, Le Figaro, broke the news that Benedict XVI and Cardinal Robert Sarah had collaborated on the soon-to-be released From the Depths of Our Hearts. The French volume will be available on January 15. The English translation of the book will be published by Ignatius Press in February.

Early reports that both the Pope Emeritus and Cardinal Sarah defended priestly celibacy in the book drove both their critics and their fans to their keyboards.

Joshua McElwee of the National Catholic Reporter suggested that by writing about the celibate priesthood the Pope Emeritus was opposing the plans of Pope Francis.

“It comes as Pope Francis is considering allowing married priests in the Amazon region.”

McElwee said he found this “incredible.”

“As I digest this, I'm realizing how incredible it is [:]A former pope speaking in public about something his successor is currently in the process of considering,” he wrote.

However, there has not been another former living pope since 1415.

Father James Martin, SJ, of America magazine said that he found the news “hard to fathom” and criticized Benedict for speaking out.

“I have the greatest respect for Pope Emeritus Benedict XVI,” Martin tweeted.

“Nonetheless, when he resigned the papacy, he said he would remain ‘hidden from the world,’” he continued.

“[…] But here, he is speaking out on an issue that was one of the main topics for the recent Synod on the Amazon and is now under consideration by the Pope.”

Martin, known for his LGBT advocacy, added that people might interpret this action as a “great theologian contributing to the conversation” but that others might see it as “a ‘parallel magisterium,’ which can lead to disunity.”

As one of his Twitter readers noted, Fr. Martin wrote in 2008 that when the newly-elected Benedict stepped out onto the balcony in 2005, Fr. Martin had felt like throwing himself from one.

“After reading Card Sarah’s words and declarations in Le Figaro, what’s clear is his contempt for Eastern-rite, Ordinariate & other married RC clergy as second-class half measures that ‘wound’ the priesthood — ie a strong rejection of postconciliar popes’ ecumenical approaches,” Ivereigh tweeted.

In another tweet, Ivereigh made a reference to an “emeritus papacy,” calling it “a mess.” Earlier, he suggested that Benedict had been abused and manipulated into writing his defense of priestly celibacy.

“Reports on emeritus pope’s condition these past months concur: he is conscious for barely half an hour at a time,” Ivereigh alleged.

“Yet he has insisted on loyalty [to Francis],” he continued.

“If he is giving views that undermine Francis it means he is being manipulated by the usual unscrupulous courtiers. #elderabuse.”

Historian Massimo Faggioli also believes that Pope Benedict is “incapacitated” and suggested that there ought to be a law restraining him.

Vatican-based journalist Marco Tosatti took issue with the idea that the Pope Emeritus is incapacitated.

“It's simply false,” he replied to Ivereigh.

“I have spoken to people who met BXVI in the past weeks,” Tosatti continued.

“Fragile body. Lucid mind, very clear vision of what is happening in the world and in the Church. The idea of ‘manipulation’ is ridiculous.”

Ignatius Press’s founder and editor-in-chief revealed, via the publisher’s online Catholic World Report, that the book is not only about priestly celibacy.

“Their book is not just about priestly celibacy, important as that is in itself,” said Father Joseph Fessio, SJ.

“It is about, as Pope Benedict describes it in his first paragraph: ‘the lasting crisis that the priesthood has been going through for many years,’” Fessio continued.

“But it is about more than that; it is about the nature of the Church and of Christian discipleship.”

Charles Collins of Crux suggested that the Pope Emeritus was not contradicting his successor, pointing out that Pope Francis himself has defended priestly celibacy as the norm.

He quoted the current pontiff as saying, “Personally, I think that celibacy is a gift to the Church, Secondly I would say that I do not agree with permitting optional celibacy, no.”

Collins believes that Benedict XVI and Sarah are taking aim at the mainstream media instead.

“According to excerpts in America magazine, the authors expressed concern that ‘the strange mediatic synod had prevailed over the real synod,’ and called on the Church ‘not to be impressed’ by ‘the bad advocacies, the diabolical lies, the erroneous ways by which they wished to devalue priestly celibacy’ in the media reporting of the Amazon synod,” he wrote.

EWTN’s Raymond Arroyo took issue with the London Times and Austen Ivereigh’s depiction of Benedict’s book as a “stage-managed” rebellion against Francis.

“This is a shameless attack on Benedict XVI,” Arroyo tweeted.

“Why not consider what he has written? Instead, some attempt to shut down dialogue when it disturbs them–resorting to personal attacks and slander.”

Cardinal Sarah has entered the fray by saying that LaCroix columnist Christope Henning’s opinion that his and Benedict’s book is against Pope Francis is “wrong.”

“This analysis is wrong,” he tweeted in French. “The book Des profondeurs de nos cœurs is not strictly opposed to the Pope. … In reality we worked in a filial spirit. It is unhealthy to endlessly wish for men of the Church to be opposed to each other.”