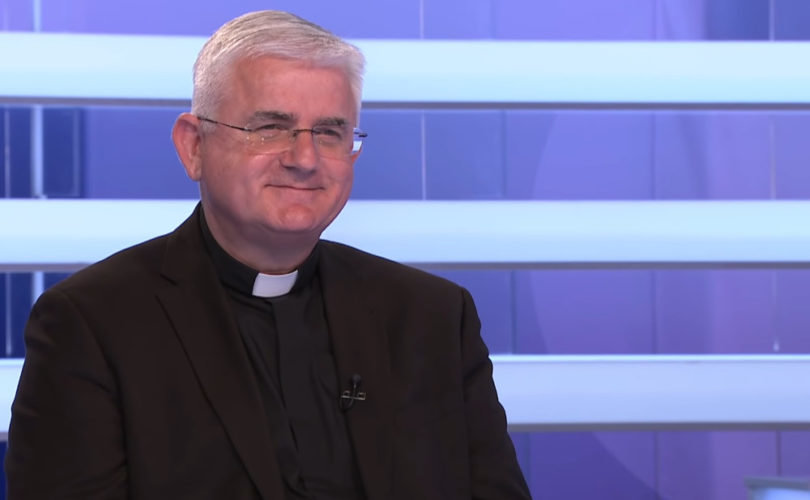 RIJEKA, Croatia, May 25, 2021 (LifeSiteNews) — Marking what is called the International Day Against Homophobia and Transphobia (IDAHOT), the coadjutor-Archbishop of Rijeka, Croatia, begged forgiveness from homosexuals for the “rejection” they have experienced on the part of the Catholic Church. Archbishop Mate Uzinić published his statement on his personal Facebook page on May 17, invoking the spirit of the “ground-breaking” Apostolic Exhortation Amoris Laetitia to justify the move.

Uzinić quoted paragraph 250 from Amoris Laetitia, which says: “The Church makes her own the attitude of the Lord Jesus, who offers his boundless love to each person without exception.”

He added: “In the spirit of Amoris Laetitia, section 250, we have a duty to respect ‘every person, regardless of sexual orientation … in his or her dignity and treated with consideration, while ‘every sign of unjust discrimination’ is to be carefully avoided, particularly any form of aggression and violence. Such families should be given respectful pastoral guidance, so that those who manifest a homosexual orientation can receive the assistance they need to understand and fully carry out God’s will in their lives.”

“I regret that there are still Catholics who do not agree with this,” he continued. “And especially that there are those who think they are serving Christ and the Church through discrimination, aggression and violence, insults and derogatory comments at the expense of homosexuals.”

He concluded: “I apologize to homosexuals for the fact that because of this they may still feel rejected by the Church, and that with their families, [with which] they still belong to the Church, which as a ‘family of families’ should be a family for all its members, they cannot get the considerate pastoral care which according to Amoris Laetitia should be guaranteed them.”

His statement met with mixed comments, many decrying his tone because of its lack of clarity regarding the Church’s teaching on homosexual acts. Indeed, by asking “forgiveness” for perceived rejection by the Church, Archbishop Uzinić seemed to be justifying homosexuals’ anger at the moral message regarding the practice of homosexuality.

La Croix observed that ten years ago, at the “Gay Pride” held at Split in 2011, demonstrators underwent verbal and physical aggression on the part of counter-demonstrators, thereby justifying Archbishop Uzinić’s remarks. However, there is a difference between being protected from unjust and violent aggression, as every citizen should be, and reaping opposition in the course of affirming rights as a group, openly contradicting natural law. Invoking the natural law can now easily be construed as “hate speech” and indeed is, in many countries.

Among the comments on Uzinić’s message, one that kept coming back was that while the archbishop was condemning forms of violence, he was not at the same time recalling the Church’s teaching on the sinfulness of homosexual acts, thereby sending out a confusing message to the public.

“It is confusing for the weak in the faith,” said one message on Facebook.

The comment complained that the archbishop was giving credibility to the idea that Catholics “reject” homosexuals in violent and even criminal ways. It said:

I doubt that any of the people who follow you will attack someone who is gay. As disciples of Christ we should have a spontaneous need to love all people or at least not reject them, but even more we should have the need and duty to warn a brother who is in sin (e.g. a homosexual who is sexually active). Warn in love, of course.

Now, you have joined in celebrating the day of the fight against homophobia. ‘Homophobia’ is a term coined by LGBT advocates … Your flock is very discriminated against by this expression and has been inflicted great injustice. The church is increasingly known in public opinion as a homophobic community, which is not true. I think you are trying to show that the Church is not in the wrong way.

Homosexual activity is a sin! We do not condemn you, but we will not tell you fairy tales that your way of life is acceptable to us.

Another Facebook commentator, a recent convert, complained that Mate Uzinić had submitted to a “manipulated narrative” in designating Catholics “who think they are serving Christ” through violence, aggression, and contempt. “The expressions are so general that they do not tell anyone anything concrete and useful, but that is why, unfortunately, they fall into the trap of lying about ‘Catholic homophobia.’”

The same commentator regretted that “considerate pastoral care” for homosexuals could be presented in the manner of the American Jesuit James Martin, instead of the “true consideration promoted by the Courage organization, which advocates a complete rejection of homosexual tendencies or a life of celibacy.” He added: “We are talking about an organization whose methods and logistics, according to my information, were offered to our bishops, but without success.”

According to La Croix International, the English-speaking version of the unofficial daily of the French episcopate, “his message was considered particularly poignant in a country known to be socially conservative and not tolerant of sexual diversity.” The journal also remarked that it “came barely two months after the Vatican reiterated its objection to blessing same-sex unions.”

But perhaps more importantly, Uzinić’s remarks were aired less than three weeks after a “historic” decision by the administrative tribunal of Croatia’s capital, Zagreb. At the end of April, it opened the door to adoption by same-sex couples in the country by judging that Mladen Kožić and Ivo Šegota, two men in an official “life partnership,” should not undergo “discrimination” when being assessed as to capacity to adopt because of their civil union.

A homosexual activist of the “Rainbow Families Association,” Daniel Martinović, told the private European information website Euractiv that this ruling means that all life partners, “all gay and lesbian couples,” can now become adoptive parents and demand an assessment in view of adoption “without fear.” In 2020, the activist couple had already obtained the right to act as foster parents.

— Article continues below Petition —
PRAYER PLEDGE: Join faithful Germans in prayer to STOP homosexual "blessings" and plunge into schism
Show Petition Text
11011 have signed the petition.
Let's get to 12500!
Thank you for signing this petition!
Add your signature:
Show Petition Text

In historically Catholic Croatia, these events all point one way: condemnation of homosexuals and the fact of not recognizing equal rights for same-sex couples is a form of “discrimination.”

More than 86 percent of Croatians proclaim themselves to be Catholics; 27 percent of these are practicing Catholics who go to church every Sunday — a much higher proportion than in Western Europe. At the same time, according to La Croix International, Croatia is considered the most advanced Slavic country in terms of LGBT rights by ILGA (the European branch of the International Lesbian and Gay Association), and “anti-gay discrimination” has been made a crime since 2009.