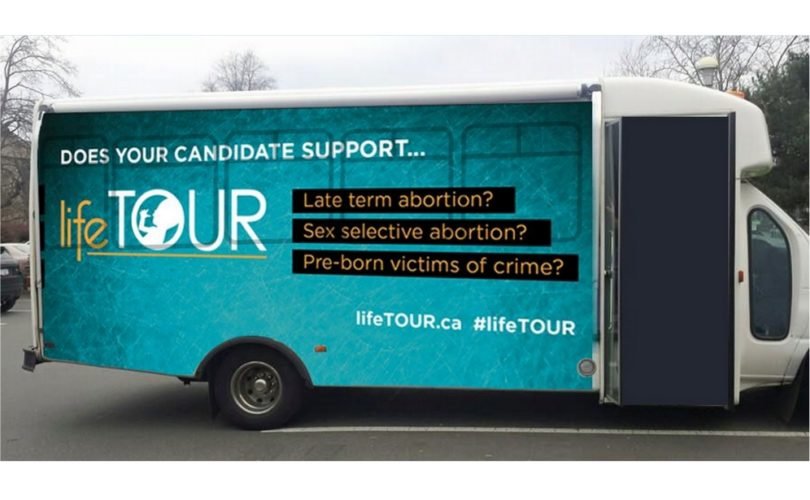 OTTAWA, September 2, 2015 (LifeSiteNews) – As Canadians ponder who should govern them for the next four years, a second coast-to-coast pro-life junket is aiming to inject life issues into their decision.

“Public engagement with life issues at the political level is certainly increasing,” said Niki Pennings, spokesperson for the LifeTour, which will start September 23 in Moncton, New Brunswick and make 20 stops ending with Vancouver on October 17, by bus, just before voting day, for a rally at the downtown main library.

Already the Canadian Centre For Bioethical Reform and the Campaign Life Coalition have teamed up for the controversial No2Trudeau campaign, which went from the west to east coasts distributing 1 million postcards door-to-door, each bearing a graphic photo of an aborted unborn child juxtaposed with one of Liberal Leader Justin Trudeau, to remind voters of his ban on pro-lifers running for his party. Along the way some recipients complained to police, who told them the volunteer pamphleteers were within their free speech and expression rights. In Saskatoon, when the campaign’s deadline loomed, it resorted to Canada Post and at least one mailman refused to handle the postcards.

Now the Association for Reformed Political Action (ARPA) and its vigorous offspring, WeNeedaLaw.ca are taking a team of speakers east to west to activate voters on three hot issues most candidates would rather ignore: sex-selective- and late-term abortions and pre-born victims of crimes.

“There is a very strong unwillingness among Canadian politicians to address any aspect of abortion,” Pennings told LifeSiteNews, which she said was in strong contrast to the American situation. “We want to get voters to raise these issues with the candidates.”

LifeTour wants pro-life voters to bring up its three hot-button issues with candidates when they come knocking, at all-candidates’ meetings, radio hot-line shows, with letters and telephone calls. For each of the issues, LifeTour provides four questions for pro-lifers to ask each candidate.

Sex-selective abortions are probably the most contentious. A poll done in 2011 indicated 92 percent of Canadians opposed the practice of aborting female unborn, which is usually done by traditional immigrant families that already have “enough” girls and want another child only if male. When the issue was raised as a motion in Parliament by MP Mark Warawa in 2013, however, backroom collusion by all party leaderships kept it from the floor of the House of Commons.

Late-term abortions refer to those done to unborn children after 20 weeks gestation, by which time they can feel pain.  After around 22 weeks, they are “viable” outside the womb, at least if cared for in high-tech care units.

Several American state legislatures have passed so-called “fetal pain” laws banning late abortions in the interest of the unborn child. LifeTours’ on-web material gives the reason why: “Recent evidence from the United States suggests that these babies suffer immense pain during this procedure, also known as dismemberment abortion.” Pennings told LifeSiteNews, “We would certainly like to see similar laws in Canada.”

Pre-born victims of crime are babies who are stillborn, usually when their mothers are assaulted or injured in motor vehicle accidents caused by criminal negligence. Pennings noted the bus-borne tour will stop in Windsor to mark the 2014 murder of Cassandra Kaake and the miscarriage of her unborn baby Molly.

A bill to make it a crime to injure an unborn child in an assault on the mother, Bill C-484, passed at its second reading in the House of Commons but the 2008 election came before it could proceed further. Canada’s Abortion Rights Coalition found 15 reasons to oppose this bill, including, incredibly, that it would both detract from women’s right to abortion and create “an adversarial relationship” between women and their unborn children.

Pennings said that police reports indicate there have been 23 instances of assaults on mothers resulting in deaths of unborn children since 2005. As for late-term abortions, data obtained from the British Columbia government indicates just over 1.3 percent of all 13,067 abortions done in 2013-14 or 288, were performed after 18 weeks gestation. (But 2,308 out of the total were medical abortions done without surgery, and are not dated in B.C.’s records.) Extrapolated nationally, this would mean 1,300 late term abortions across Canada each year.

“We want people to ask their candidates and to confront other voters with the question, ‘Are you okay with abortions done so late the baby can feel pain? Are you okay with people aborting their children just because they are girls?’ We want to use this election to confront Canadians with the reality of abortion.”