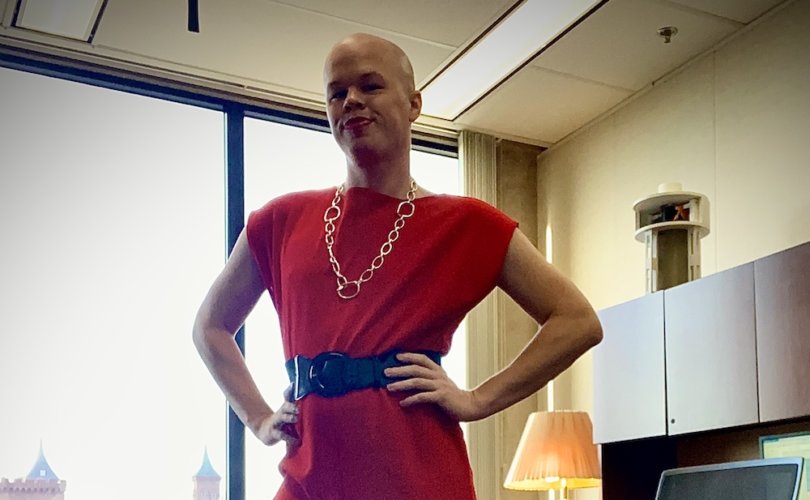 (LifeSiteNews) – In yet another black eye for the White House, a controversial Biden administration energy official has been charged with stealing a woman’s suitcase from an airport.

Brinton’s hiring drew attention for his extracurricular activities, including drag, BDSM-tinged “puppy play” (a fetish that involves pretending to be dogs or dog handlers), and lobbying against talk therapy for unwanted same-sex attraction, ostensibly driven by his experience as a “survivor of a traumatic and torturous conversion therapy experience” (the veracity of which has been called into question).

The New York Post reported that Brinton has been charged with felony theft of a moveable property without consent for taking a $2,325 Vera Bradley suitcase from the Minneapolis-St. Paul Airport baggage claim in September, punishable by up to a five-year prison sentence and/or a $10,000 fine.

He was captured on surveillance footage apparently removing the bag’s ID tag at the airport, and initially told police it was his bag with his clothes inside it, court documents say. Soon he changed his story to acknowledge it wasn’t his, but claiming he grabbed it by mistake due to fatigue.

“If I had taken the wrong bag, I am happy to return it, but I don’t have any clothes for another individual,” Brinton said at first. “That was my clothes when I opened the bag.” Two hours later, he called police back to acknowledge he had not been “completely honest.”

Brinton’s second version of events was that he realized he had taken the wrong bag at his hotel, then emptied the contents into the dressers out of fear (which is contradicted by the criminal complaint, which says no clothes were found in the room). Police say additional surveillance footage shows Brinton using the pilfered bag on at least two subsequent trips.

The incident has inspired widespread mockery on social media, as well as arguments that such “aberrant behavior” should have been expected given his history:

Brinton long ago stole his appearance and identity from females. It was only a matter of time before he started stealing their luggage. https://t.co/4cEdcBLlz8

The government hires top experts in their field.

After all, there were no warning signs of any aberrant behavior.

In the meantime, the Biden administration has placed Brinton on leave.