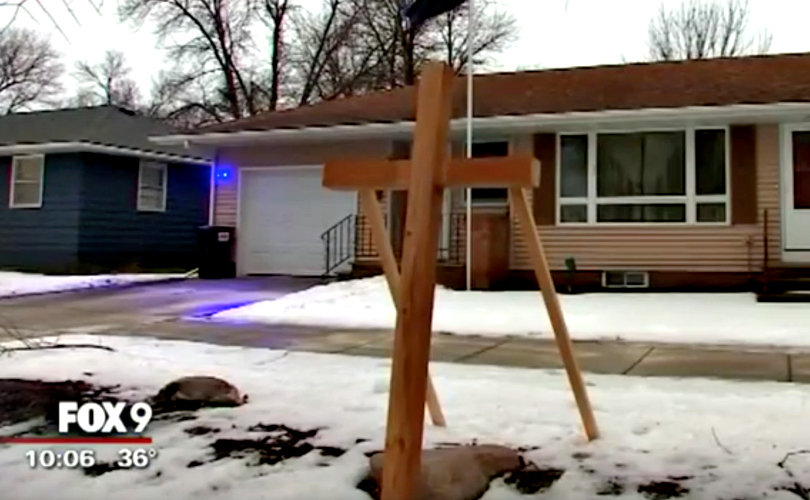 BELLE PLAINE, Minnesota, January 23, 2017 (LifeSiteNews) – Crosses are springing up across this small Minnesota town after secular activists forced the town to sever a cross from the memorial of a U.S. soldier mourning a fallen comrade.

Numerous citizens are ordering full-sized replicas for their lawns and putting wooden crosses up in the park to replace the metal one that was removed.

The memorial, a steel sculpture depicting a kneeling U.S. infantryman with helmet off beside a simple cross during the Second World War, is attracting support from townspeople.

After some of the replacement crosses in the park were stolen, members of the Second Brigade motorcycle club, a national veterans’ support group, and other citizens, are keeping a 24-hour watch over the memorial.

The cross was cut off the statue after a local atheist resident, with the backing of the Wisconsin-based Freedom From Religion Foundation, lodged a complaint.

“It is unconstitutional,” Rebecca Markert, staff lawyer for the FFRF, told LifeSite. “A city cannot have a religious symbol on public land, especially one so significant a Christian symbol as a Latin cross. They were correct to divest themselves of it.”

Many people in Belle Plaine disagree.

“It's another right that everybody feels is being taken away from them,” Mayor Chris Meyer told the local Channel 5 News. “(What) I'd like to call the minority has the majority voice in this opinion.”

“We’d like to see the original cross go back up,” Albert Koepp, treasurer of the Belle Plaine Veterans’ Club, told LifeSiteNews.

In retrospect, city administrator Mike Votka admitted, if the city had been asked beforehand, it might have rejected the statue because of the constitutional requirement that church and state be kept separate.

“It’s important for any memorial on government property to be inclusive and not exclusive. There are many atheists in foxholes. We’re not a Christian country, and Belle Plaine is not a Christian city,” she told a local newspaper.

City Attorney Robert Vose initially defended the sculpture, arguing that it “constitutes speech or expression by the Belle Plaine Veterans Club” and is thus protected by the Constitution.

But the FFRF was undeterred and the city council, under the threat of the lawsuit, was deterred. Earlier this month, city officials told the veterans’ club about the threat.

“We decided to get the city out of its legal difficulty,” Koepp said.

Katie Novotny, who created one of pages, told LifeSiteNews: “I was offended when the nativity scene was taken down. Now this. When is enough enough? She decided that “God didn’t cop out on us, so we shouldn’t cop out on God.”

But what about the separation of church and state?

“I don’t think that is what the Constitution means,” she said. “People are misconstruing it.

“I’m not a constitutional lawyer, but this is an historical statue making an historical statement. Thousands of American servicemen are buried in Europe and the Pacific beneath crosses just like the one in the sculpture.”

Members of the Gregory family have quickly put together and given away 500 wooden crosses for residents to put on their front lawns. Dozens have appeared around the Gregory statue, only to be broken off by vandals. That led to defenders of the original sculpture keeping a vigil at the site.

“We are telling everyone to be perfectly law-abiding,” Novotny said. “If they can’t be peaceful, they should stay away.”

Votka told LifeSiteNews that city workers on Monday removed the crosses planted around the steel sculpture without any fuss.

“We are just following our regulations for people leaving their property in our parks,” he said. “We explained that to them.”

Novotny says there will be no trouble with city workers, but there will “absolutely” be more crosses put up during the day. As well, another supporter of the sculpture, Lisa Saxe, has ordered and is distributing decals showing the work. These are already appearing on car windows.

A local firm, Source Machine Ltd., is making full-scale steel copies of the sculpture for front lawns and has already received orders for 400 at $40 each, office manager Jill Wenninger said.

“We hope to have half of them ready for delivery by Thursday,” she told LifeSiteNews.

Novotny says defenders of the Gregory sculpture have been offered the support of Alliance Defending Freedom, a national pro-bono law firm dedicated to defending religious liberty.

“If the city won’t accept their help,” Novotny said. “people are talking about getting ADF to help us sue the city.”