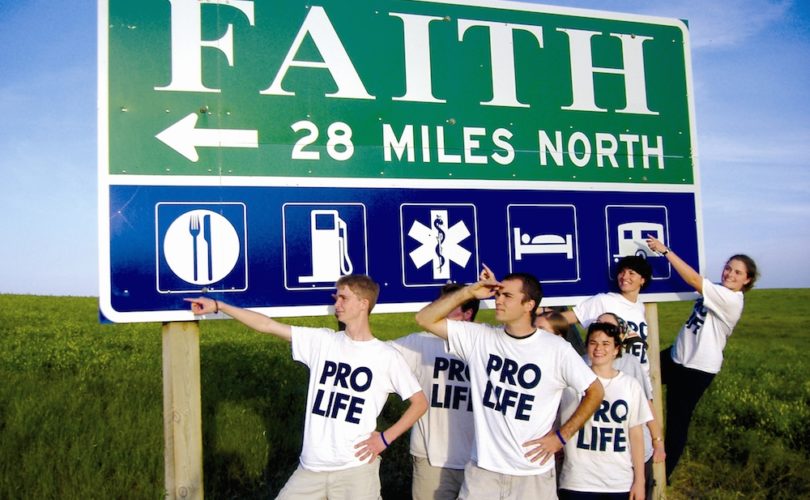 In 1993, Pope John Paul II told the world's Catholic youth to go into the public square and “to the streets” to oppose the culture of death. Tomorrow, an organization that took his challenge literally will celebrate 20 years walking across America to promote life.

“We started with one walk in 1995, from San Francisco to D.C., with just a bunch of students from the Franciscan University at Steubenville,” said Crossroads President and Chairman James Nolan. “They weren't even sure we'd continue after that, and it just became an annual pilgrimage.”

Crossroads is a national pro-life organization that coordinates and funds walks across several nations. Typically, students walk from mid-May through mid-August, and this week a rally in D.C. will honor their hard work.

Nolan told LifeSiteNews that this year 60 students in total are walking across America — which has three walks each year — Canada, Spain, and Australia. “We skipped Ireland this year,” said Nolan.

Members are young — the median age of these 60 students is 21, and most are college students — but despite their relative youth and seemingly small numbers, Nolan said their influence is tremendous. The young people, he said, go through over 70 percent of America's states in 12 weeks. Just in Canada and the U.S., walkers “speak at over 200 churches, and over 1,100 individual Masses. So they meet hundreds of thousands of people, individually, at the grassroots level.”

“Our coverage is immense, and the amount of people we're able to reach out to directly is very large.”

“When we started in 1995, we saw a lot of friction,” Nolan said. Yet, as the walks have progressed, opposition has diminished. “From 1995 until now, we've seen this radical shift.”

“We like to say we run into not much opposition at all. More often, we run into miraculous conversions, and lives saved, as a result of the young people on the walk.”

While the organization’s costs are not insubstantial — Nolan estimates $50,000 was spent on this year's campaign on gas — money comes in through church baskets. The young people camp out during the week, then rely on host families on the weekend.

Nolan says his group sees what Gallup polls have shown for years — that pro-lifers are the new majority in America. “It's wonderful to see.” He says that more and more people are becoming pro-life, and fewer people support exceptions to protection of the unborn.

On Saturday, as the culmination of months of pro-life evangelization, participants in the walk will speak at D.C.-area churches and hold a rally at the U.S. Capitol. They will also visit the Basilica, and pray at an abortion clinic near the White House.

Nolan sent LifeSiteNews testimony from some of the young people on the walk this year, many of whom are recruited from religious colleges, though some attend secular institutions.

According to Sarah Seski, “There’s something very beautiful about the way we live on Crossroads. It sounds a little crazy, but I’ve come to really love the change that I’ve seen in myself, in flexibility and gratitude for the simple things, (like a shower!) that have come from living in the moment.”

“On Crossroads, there’s no such thing as settling,” says Selki. “Here we are, proclaiming liberty throughout the land, spreading the truth of the humanity of the unborn!”

Molly Sheahan, meanwhile, says her “favorite part” of the walk “is the people we meet: on the side of the road, in Wal-Mart, in RV parks, at parishes, and gas stations. They have donated food, money, their homes, and themselves. Each one has their own story, their own gifts, and their own uniqueness to offer to the world.”

“This human connection makes me marvel. The tiniest of moments can impact a person. The sliver of time it takes to smile or wave can have an effect. It’s definitely affected me. It gives me hope that my walking can be a gift to another person.”

Lauren Mach told LifeSiteNews that “to be pro-life means to recognize a certain understanding of the human person, that includes innate value, dignity, and sanctity, which transcend the authority and control of man.”

Alex Wilson, who headed the Central U.S. Walk, said that he was “surprised by how many women have approached us that have had abortions in the past. Some tell us that they have never been able to tell anyone about it, but seeing young people standing up for life give them new found hope to start anew.  It is neat to see how we can help in their healing process.”

What was most memorable for Marina Bianco, who walked with Alex, was realizing how “going to daily mass has given me the strength to continue on this long journey. The grace of God is what has made this journey possible. It has been such a blessing to have something so familiar in unfamiliar places. No matter where I am, a Catholic Church is never too far away.”

Southern Walk leader Tyler Cutrer said, “Abortion may end with the girl, but it starts with the guy.”

“Guys are so shy to stand up and speak out because it has been thrown around in secular media that it's a woman's issue and guys need to stay out,” he explained. “It's not true.  Many guys that I meet say they are pro-life but don't want to tell the girl what to do.  That is not pro-life.”

The three U.S. walks began in Los Angeles, Seattle, and San Francisco, and are over 3,000 miles long. Nolan said that for many of the participants, this is their first step of involvement in the pro-life movement — “a training camp,” according to Nolan — that often ends with employment with a bishop's office or political work.