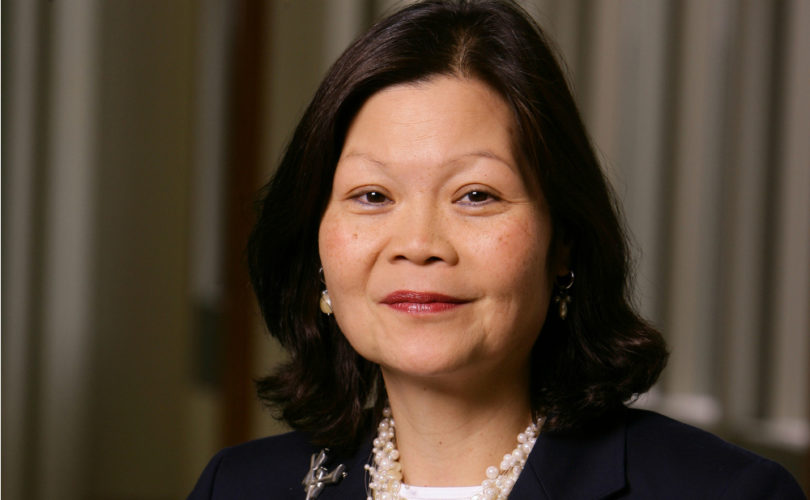 BALTIMORE, MD, May 19, 2015 (LifeSiteNews.com) — Breaking a month of silence on the scandal created by one of its high-level executives living in a homosexual “marriage,” the head of Catholic Relief Services (CRS) said the organization has yet to decide whether it should employ someone who violates Church teaching in this manner.

The US Bishops’ international relief agency is working on it, CRS President and CEO Carolyn Woo told Aleteia’s John Burger in an interview published May 18.

“CRS has a senior person who is in a civil gay marriage,” Woo said, “and the question is, ‘Is that a violation of Church teaching?’ I just want to say we are working through this.”

News broke April 20 of CRS Vice President of Overseas Finance Rick Estridge entering into a homosexual “marriage” in the same month of 2013 that he was promoted to vice president by CRS.

CRS has avoided commenting since the revelation surfaced, for example, refusing to acknowledge requests for explanation from LifeSiteNews prior and subsequent to word of the matter becoming public.

However after the initial inquiry, Estridge’s social media profiles were taken down just before the story broke.

The relief agency acknowledged the situation the day it became public to another news agency, and indicated later in the week to a third media outlet that nothing had been done about it and there would be no further comment.

One CRS critic, Michael Hichborn of the Lepanto Institute, which published the report on Estridge, criticized Woo’s remarks.

“Dr. Woo's question about whether or not CRS's having a vice president in a same-sex ‘marriage’ violates Catholic teaching is greatly troubling,” he told LifeSiteNews. “CRS is ostensibly a 'Catholic' organization, and to have a high level executive on board who so violently opposes the Mystical Body of Christ is to poison the Catholic identity of the organization itself.”

“Would Dr. Woo be wondering about this if Mr. Estridge was a card-carrying member of the Ku Klux Klan or a practicing Satanist?” Hichborn asked. “Just how much evil is CRS willing to tolerate within its executive ranks?”

Estridge, already a long-time employee of CRS at the time of his 2013 promotion to vice president, also publicly advocated for homosexual “marriage” on social media, something Woo did not address in the Aleteia interview.

Woo did acknowledge Church teaching on marriage in her deferred remarks to Aleteia.

“The Church is very clear that marriage as a sacrament is between a man and a woman open to procreation. There’s also the Church teaching on natural law. Those are the teachings,” she said.

But she questioned whether the Church had a defined expectation to uphold Church principles in hiring its people, specifically in situations like that of CRS and Estridge.

“Does it mean that the Church should not employ anyone who is in a gay marriage? Are we giving a blanket ‘No’?” she asked. “If it’s not a blanket ‘No,’ are there particular positions, such as positions that are ministerial in nature, positions which relate to the formation of the faith of young children at school?”

“While the teaching is clear, as it translates into practice there has not been defined a common approach for dealing with employment, particularly when the position is non-ministerial, when the person is not a Catholic, when the agency is not a school,” she said. “So we’re in that area when there have been various steps forward, but not a clear path.”

Further complicating the issue for CRS as an employer, Woo said, was the legal recognition of homosexual “marriage” in 37 U.S. states and Washington, D.C.

She also insisted that the bishops and CRS board were kept aware of these matters, stating, “We have had regular and consistent meetings with our board on these issues.”

While some have attempted to dismiss the problem posed by a Catholic organization’s executive publicly violating Church teaching, saying it’s a superfluous concern and fabricated controversy, CRS critics maintain this is serious, and their motivation is for the US Bishops to uphold Catholic principle and identity in its charitable ministry.

“At a time when bishops across the country are working to maintain the Catholic identity of their dioceses, chancery offices, schools, and parish choirs by denying employment to individuals engaged in same-sex ‘marriages,’” Hichborn told LifeSiteNews, “CRS is wondering whether retaining a same-sex ‘married’ vice president violates Catholic teaching.”