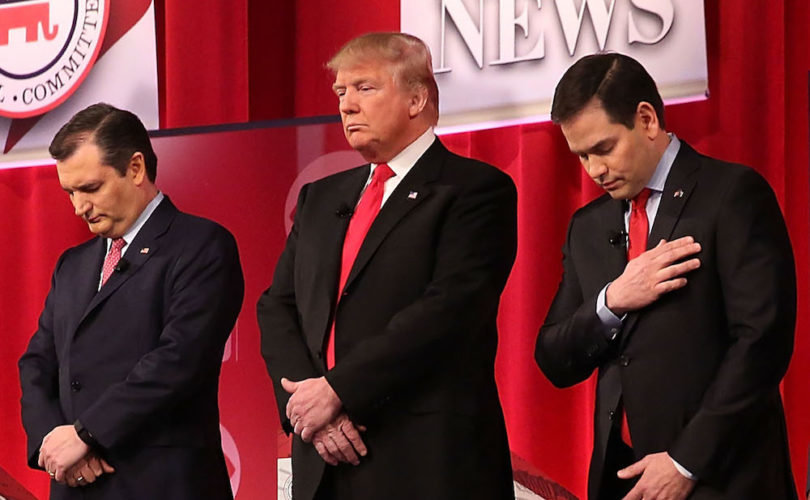 WASHINGTON, D.C., February 15, 2016 (LifeSiteNews) – The leading Republican presidential candidates have said the U.S. Senate must block any nominee Barack Obama names to the Supreme Court – and one of them is threatening to lead a filibuster if a nomination to the High Court moves forward.

Senator Ted Cruz affirmed that he would “absolutely” filibuster anyone President Obama would try to name to a lifetime appointment to the nation's highest court.

Cruz, who led a 21-hour-long filibuster in 2013 against ObamaCare – at times reading children's stories to his daughters – joins most of his fellow Republican presidential hopefuls in saying the Senate must thwart Obama's plan to name a new nominee.

Sen. Marco Rubio took a similar line on “Fox News Sunday,” saying, “The president can nominate whomever he wants, but the Senate's not going to act.”

“We're not moving forward on it, period,” Sen. Rubio said.

At Saturday night's Republican presidential debate, held just hours after Justice Antonin Scalia's death had been announced, Donald Trump said Senate Republicans must use their majority to prevent a vote from taking place until a new president can be sworn in.

Justice Scalia's death is a “tremendous blow to conservatism and frankly to our country,” he said. “I think it’s up to Mitch McConnell and everybody to stop it. It’s called delay, delay, delay.”

In a statement on Saturday, Dr. Ben Carson said, “Given the dire condition our democracy currently finds itself under Obama’s ideological agenda, I call on the Senate to stop any attempts to fill this crucial seat until We The People elect a strong Constitutionalist this November.”

Not everyone on stage agreed. Governors Jeb Bush and John Kasich were less committed.

“I really wish the president would think about not nominating somebody,” Kasich said. “If you were to nominate somebody, let’s have him pick somebody that’s going to have unanimous approval.”

Bush also said Obama had the right to nominate someone, but clarified over the weekend that the Senate should not confirm the judge if he or she is “out of the mainstream.”

Any successful appointment would shift the balance of the court, as Obama would replace Justice Scalia, a strict constructionist who believed in interpreting the Constitution according to its original intent, with a judicial activist similar to Sonia Sotomayor or Elena Kagan.

President Obama has said, regardless of popular sentiment, he's going to move forward by naming a judicial appointee. “I plan to fulfill my constitutional responsibilities to nominate a successor in due time,” he said this weekend. The Senate, he said, must “fulfill its responsibility to give that person a fair hearing and a timely vote.”

Hillary Clinton agreed that Republicans dishonor our founding documents by refusing to confirm Obama's chosen Supreme Court justice. “The Republicans in the Senate and on the campaign trail who are calling for Justice Scalia’s seat to remain vacant dishonor our Constitution. The Senate has a constitutional responsibility here that it cannot abdicate for partisan political reasons,” she said.

Clinton has talked about naming Barack Obama to the Supreme Court if she is elected president.

When asked Sunday if Obama has the better argument, since he won the 2012 election, Cruz responded, “The people also gave us a Republican Senate this last election, because they were fed up with Barack Obama's lawlessness.”

“This is a 5-4 court,” he said. “The next election needs to be a referendum on the court.”