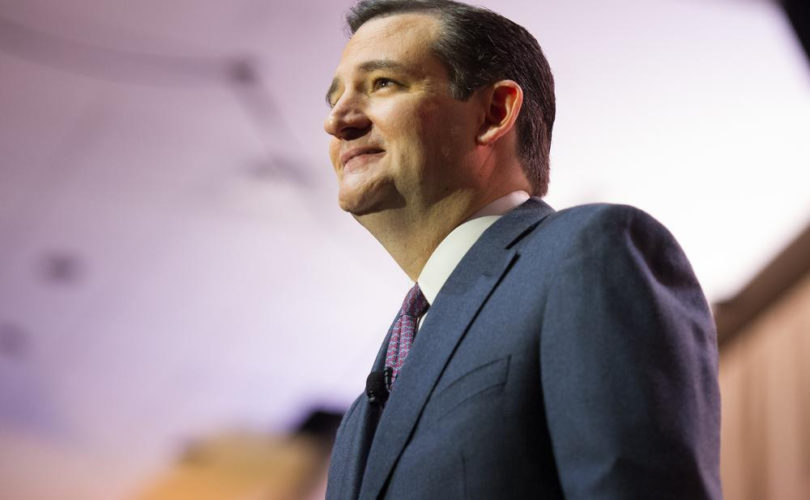 Updated at 12:19 p.m. EST to include comments from Richard Viguerie.

With nearly all votes counted, Cruz received more than 51,600 votes (27 percent) of the record-setting vote to Trump's 24 percent.

Senator Marco Rubio, who had surged in the last week on the power of a strong performance in the most recent debate and renewed emphasis on his faith, came in a strong third, with 23 percent. Rubio won the majority of caucus-goers who decided at the last minute.

“God bless the great state of Iowa,” Cruz said in a 32-minute-long victory speech. “Let me be first say, to God be the glory.”

Cruz was the only one of the three top finishers to address social issues in his post-caucus speech.

That message helped power him to victory with the help and support of the state's evangelical Christian vote. CBS News exit polls showed that nearly two-thirds of 2016 Iowa caucus goers said they were born again Christians – a higher percentage than 2012 (57 percent) and 2008 (60 percent). Cruz – an outspoken pro-life leader who has emphasized religious liberty at Iowa campaign stops – won 34 percent of their votes, significantly higher than Trump or Rubio.

Planned Parenthood reacted by tweeting that Ted Cruz's “vision for America would be a nightmare for women,” because he “has led a crusade to decimate women’s ability to access health care.”

The nation's largest abortion provider revived a common element of the “war on women” rhetoric of the past, claiming Cruz would deny women's access to contraception:

On his way to victory, Cruz also won the lion's share of voters who consider themselves “very conservative.”

The largest-ever turnout for the caucus was thought to help Trump, but instead showed the power of Cruz's voter turnout method, which microtargets his most likely supporters and contacts them multiple times to remind them to vote.

“Tonight is a victory for the grassroots,” Cruz said Monday night, as he appealed for the support of “Reagan Democrats” going into next week's New Hampshire primaries.

The loss comes as a first to Trump, who has dominated national and state polls since the murder of Kate Steinle by an illegal immigrant who had been deported five times propelled border enforcement into the national debate. Trump won with independents, first-time caucus-goers, and those whose top issue was immigration.

Trump gave a gracious, four-minute-long speech thanking his supporters and pledging his love of Iowa.

“I think I might come back here and buy a farm,” Trump said.

“It will be interesting to see if Trump under performs his polling in New Hampshire as he did in Iowa,” said conservative grassroots leader Colin Hanna, the president of Let Freedom Ring USA, in a statement e-mailed to LifeSiteNews. “His campaign may have bought the farm last night.”

Huckabee, who previously won a record-setting Iowa caucus in 2008, dropped out of the race following his poor showing.

On the Democratic side, Hillary Clinton and Bernie Sanders finished in a dead heat – within 0.29 percent of one another – while Martin O'Malley dropped out of the race.

“I know we can protect our rights – women's rights, gay rights, voting rights, immigrants rights, workers rights,” Hillary said in her speech, setting up a clear contrast between the two parties in the general election.