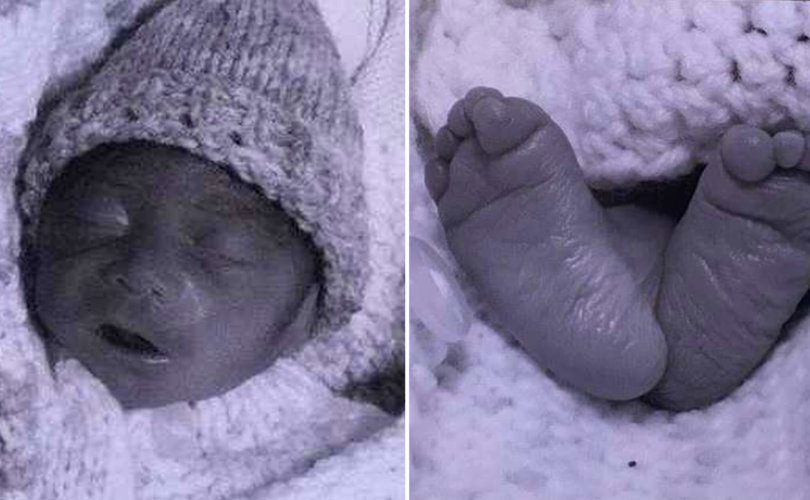 February 18, 2020 (LifeSiteNews) – A UK hospital appears to have left a child born after a failed late-term abortion to die in the arms of their mother, according to a report in The Sun.

The mother of the baby, Sofia Khan, says she held her baby in her arms for about an hour before he died. Medics refused to help the baby after he was born alive despite a lethal abortion injection having been administered.

The report explains that Khan and her husband decided to abort their baby boy, who they had named Mohammed, after learning that he had spina bifida. Medics informed Khan that her baby was unlikely to survive the duration of the pregnancy.

“We were heartbroken, but we made the decision to terminate. We felt it was best for the baby but even so I had moments of doubt and guilt,” Khan said.

Medics at St. Mary’s Hospital in Manchester delivered a lethal injection to the baby through Khan’s stomach at 25 weeks into the pregnancy. But unknown to the medical staff, her baby survived the attempted abortion injection.

According to the report, doctors did two scans that confirmed that the baby no longer had a heartbeat.

Khan was then transferred to her local hospital in Bolton to give birth to her dead baby. But while waiting to give birth to a baby that she believed to be dead, Khan says she felt him kick.

Khan gave birth 10 hours later – and was stunned when she heard her baby crying.

Khan says the midwife “went into shock. She was screaming for help; she ran with the baby into the corridor.”

“They brought him back and said, ‘What do you want us to do?’ and I didn’t know what they meant,” she said. “I held him and cuddled him and told him how much I loved him.”

“He was such a fighter. He had a huge hole in his spine and he was very disabled, and yet he hung on to life for an hour.

“I can’t help thinking that he was determined to have one cuddle with his mummy.”

Khan says she is “still grieving” and that she thinks about her little boy every day.

A national spokesman for the UK pro-life group the Society for the Protection of Unborn Children (SPUC) told LifeSiteNews that the story told “the shocking truth” about abortion in today’s Britain.

“This excellently written story in The Sun is truly heartbreaking,” the SPUC spokesman said.

“It tells the shocking truth about abortion in today’s Britain, where it is considered ‘right’ as one of the doctors in this story put it, to kill a disabled baby,” he said.

“The baby’s mother says she is grieving. Of course she is. She heard her baby crying and held him in her arms until he died an hour later. This is new ‘normal’ in modern Britain, where the value of human lives are routinely weighed up by medics and disposed of if they are found wanting,” the spokesman added.

According to the report, the coroner recorded the death from natural causes due to “extreme prematurity brought about by compassionate termination of pregnancy, with a secondary cause of congenital malformations.”

Khan and her husband reportedly named their son Mohammed Rehman, gave him a full funeral and buried him near their home.

Dr. Dinakar Seshadri, a neonatal consultant who was called in after Mohammed was born, said that he believed that the decision to abort the baby was “brave” and “the right decision” due to his disabilities.

The UK Abortion Act of 1967 exempts all abortions of unborn children done up to 24 weeks if two doctors agree that ongoing pregnancy or childbirth endangers the health of the woman. But abortions may also be done up to birth if the child is disabled or in certain other circumstances.