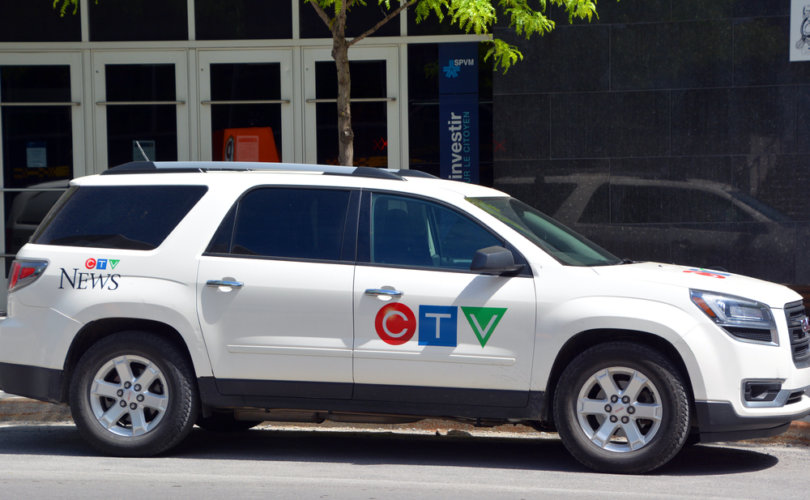 EDMONTON, Alberta (LifeSiteNews) — As frustration towards mainstream media continues to mount citing biased coverage, a major Canadian outlet is removing their logos from their vehicles over “safety” concerns.

Last night, Jeremy Thompson, a reporter and anchor for CTV News Edmonton, posted pictures of his company car having its logo removed, explaining that the outlet has “made the decision” to “remove the branding from our vehicles” for the “safety” of employees.

“This is a sad day for me. [CTV Edmonton] has made the decision to remove the branding from our vehicles for safety,” posted Thompson.

“I am proud of the excellent and vital work we do, perhaps more important now than ever. I’m proud to represent that in public, but it’s just not safe right now.”

This is a sad day for me. @ctvedmonton has made the decision to remove the branding from our vehicles for safety. I am proud of the excellent and vital work we do, perhaps more important now than ever. I’m proud to represent that in public, but it’s just not safe right now #yeg pic.twitter.com/woriF5g7Ct

When asked by another reporter if this was just for the CTV News branch in Edmonton, or the institution overall, Thompson replied, “I’m not positive, but I know decals have become less common on news vehicles in general in recent years. I kept mine as long as I could.”

American political activist and self-described anarchist Michael Malice responded to the now “viral” images by saying, “The corporate press is the enemy of the people.” This seems to indicate that he believes it is the fault of the mainstream outlets themselves that the public no longer trust them.

“I drive my own car for work, so I can’t relate to being this emotionally connected to my employer-provided car. But I don’t get bailouts from Justin Trudeau like Bell Media’s [owner of CTVNews] $122 million from the Canada Emergency Wage Subsidy to complain on Twitter when people are mean to me,” stated Rebel News reporter Sheila Gunn Reid .

I drive my own car for work so I can’t relate to being this emotionally connected to my employer-provided car.

But I don’t get bailouts from Justin Trudeau like Bell Media’s $122 million from the Canada Emergency Wage Subsidy to complain on Twitter when people are mean to me. https://t.co/tLjCLqjk0a

As Thompson himself implied, public distrust of legacy media has been growing for years, with animosity accelerating since the onset of the so-called COVID pandemic.

Many conservatives have consistently criticized Canadian mainstream media as being intentionally and unfairly biased towards the left-wing and the Liberal Party of Canada, especially in their complete allegiance to, and unwillingness to criticize, Trudeau’s radical COVID tactics.

While CTV News has certainly taken much criticism for such coverage, it is the Canadian Broadcasting Corporation (CBC), Canada’s state funded media, that has been the principal object of public ire.

Most notably, the CBC came under fire earlier in the COVID “pandemic” when they were caught using footage of a mannequin in a hospital bed in a story claiming hospitals were overwhelmed by coronavirus patients.

Not just conservative critics, but former CBC employees have levied accusations of bias and dishonesty at the “Mother Corp.”

“In a short period of time, the CBC went from being a trusted source of news to churning out clickbait that reads like a parody of the student press,” wrote former CBC journalist and producer Tara Henley earlier this year.

“Those of us on the inside know just how swiftly — and how dramatically — the politics of the public broadcaster have shifted,” she continued.

“To work at the CBC in the current climate is to embrace cognitive dissonance and to abandon journalistic integrity. It is to sign on, enthusiastically, to a radical political agenda that originated on Ivy League campuses in the United States and spread through American social media platforms that monetize outrage and stoke societal divisions. It is to pretend that the ‘woke’ worldview is near universal — even if it is far from popular with those you know, and speak to, and interview, and read.”