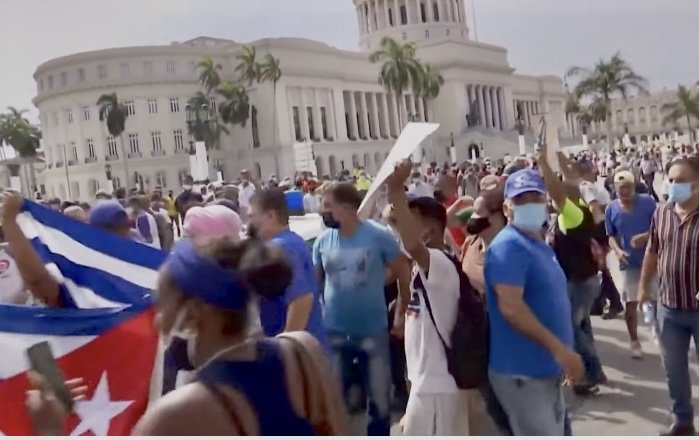 Protesters take to the streets in Cuba.YouTube

HAVANA, July 12, 2021 (LifeSiteNews) – Cuba erupted with rare anti-government protests yesterday, with tens of thousands of people taking to the streets throughout the island and calling for an end to the communist regime.

Demonstrators, some waiving the American flag, could be heard shouting “Down with the dictatorship,” “We are not afraid,” and “Freedom” as they marched through Havana on Sunday, demanding dictator Miguel Díaz-Canel step down.

JUST IN – Mass protests erupt in several cities in #Cuba over the poor state of the socialized medical system. Protesters demand freedom from communist dictatorship.pic.twitter.com/NOSdVgP0By

This is deeply moving.

Watch as Cubans wave the American flag while marching against the island’s 62 year-old communist dictatorship on the streets of Havana.

Never forget what America represents to millions across the world. #SOSCuba���� #PatriaYVida
pic.twitter.com/rbEZmL7YgB

Security forces eventually cracked down in the afternoon, making hundreds of arrests and beating protesters in social media videos while military vehicles with mounted machine guns patrolled the capital after people dispersed. The Cuban regime reportedly cut internet service, according to the Miami Herald.

Cuba’s grassroots, anti-government protests, the largest since at least 1994, began near Havana, the BBC said, but quickly spread throughout the island nation. Inventario, a group that tracks Cuban data, counted demonstrations in more than five dozen locations on July 11 and at least one on Monday.

Protests have broken out in cities and small towns alike, including Santiago, Cienfuegoes, and Palma Soriano. “This is the day. We can't take it anymore. There is no food, there is no medicine, there is no freedom. They do not let us live. We are already tired,” a protester named Alejandro told the BBC.

“President” Díaz-Canel, who took the helm of Cuba’s 60-year-old communist dictatorship three years ago, outlined a violent response to the historic demonstrations on Sunday, issuing a “combat order” and telling communists “to come out onto the streets.”

“We’re calling on all of the revolutionaries in the country, all of the communists, to come out onto the streets and to go to the places where these provocations are going to take place,” he said. “The combat order is given: To the streets, revolutionaries.” Diaz-Canel has baselessly claimed that Western governments and the “Cuban-American mafia” have orchestrated the protests.

The nationwide unrest comes amid widespread food shortages and skyrocketing inflation, brought on by decades of communist policies. Cuba’s economic problems recently have been exacerbated by COVID restrictions that have hindered tourism, the island’s top industry, in addition to sanctions imposed on the government by the Trump administration.

Former President Donald Trump released a statement today highlighting his “very tough stance on Cuba” and calling on the Biden administration to “stand up to the Communist regime.”

Don’t forget that Biden and the Democrats campaigned on reversing my very tough stance on Cuba. Remember when Obama attended baseball games with Castros while they imprisoned, beat, and killed the Cuban people. I stand with the Cuban people 100% in their fight for freedom. The Government must let them speak and be free! Joe Biden MUST stand up to the Communist regime or — history will remember. The Cuban people deserve freedom and human rights! THEY ARE NOT AFRAID!

Liberal news outlets, like CBS News and the Associated Press, have falsely blamed Cuba’s turmoil on the Trump administration, echoing Cuban authorities, with little mention of the communist government.

The Biden White House responded Monday as well – a full day after protests began. “We stand with the Cuban people as they bravely assert their fundamental and universal rights, and as they all call for freedom and relief from the tragic grip of the pandemic and from the decades of repression and economic suffering,” Joe Biden said on Twitter.

His remarks made did not discuss either communism or socialism. “Imagine being afraid to condemn the two most harmful ideologies because you might anger your base, who clearly now embraces those ideologies,” Republican U.S. Rep. Lauren Boebert of Colorado said in reaction.

The Biden administration initially claimed Sunday that Cuba’s protests were due to “rising COVID cases/deaths.”

Republican U.S. Sen. Marco Rubio of Florida, a son of Cuban migrants, slammed Chung’s comments as “ridiculous.” The protests “are not simply because of COVID,” he tweeted.

Twitter also faced criticism on Monday for downplaying the anti-communist demonstrations, after describing a hashtag connected with the protest movement as “helping to spread awareness on the impact of COVID-19 in Cuba as cases hit an all-time high in the country.”

Ignores this is really about how socialism is a disaster & always leads to tyranny, despair & suffering pic.twitter.com/T6DLOgFoAc

Sen. Rubio called the description “surreal but not surprising.”

Along with Rubio, several Cuban-American lawmakers have voiced support for the protests, including Republican Reps. Mario Diaz-Balart, Carlos Gimenez, and Maria Elvira Salazar of Florida, who published a joint statement Sunday afternoon.

“Now more than ever, the United States and the international community must support the Cuban people in their struggle for freedom. The humanitarian crisis Cuba faces right now is yet another symptom of the incompetence and absolute cruelty of the Cuban tyranny,” they said, condemning the “communist regime” for using “savage violence against the people peacefully demonstrating in the streets.”

Self-stylized “Democratic socialists” in Congress, such as U.S. Sen. Bernie Sanders, (I-Vermont), and Rep. Alexandria Ocasio-Cortez, (D-New York), had not made public comments on the protests, however, as of Monday evening. Sen. Sanders nevertheless took the time on Monday to criticize “tremendous pain and suffering” in America.

No members of the far-left so-called “Squad” or authors of a recent letter by congressional Democrats calling on the Biden administration to lift sanctions on Cuba have released statements on the developments in Cuba so far, the Washington Free Beacon reported.

The Cuban protests have prompted celebrations in the United States, as in Miami, where around 5,000 mostly Cuban-Americans joined a caravan that shut down part of the city on Sunday.

We stand with the people of #Cuba ���� pic.twitter.com/pmn6tjsBIw