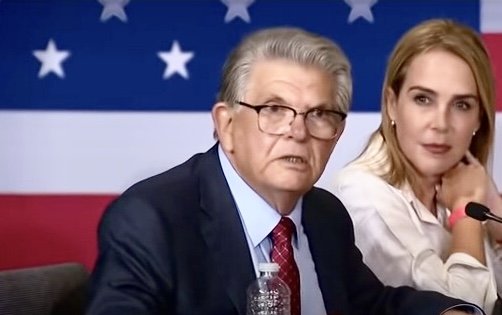 MIAMI, Florida, July 14, 2020 (LifeSiteNews) – During a roundtable event with President Donald Trump in Florida on Friday, Cuban-born businessman Maximo Alvarez warned Americans about the dangers of communism and socialism, telling young people not to be “useful idiots.” He also stressed the importance of American values.

Alvarez is the founder, owner, and president of Sunshine Gasoline Distributors. He came to the United States as a 13-year-old. “Almost 60 years later, I am sitting next to the President of the United States, talking about the American dream,” he said of his unlikely story.

He then went on to talk about his experiences as a child in Cuba, comparing the rise of communism in that country, spearheaded by Fidel Castro, with the current situation in the United States.

“What is happening in our backyard today I experienced as an 11-year-old. I remember vividly all of the promises that a guy named Castro gave and how 99 percent of the people swallowed the pill. It took many years. Later, after I read somebody named Saul Alinsky, that I realized that all those people were nothing but useful idiots.”

Alinsky was a left-wing activist in the United States, famous for his book Rules for Radicals, which explained how to successfully run a movement for change.

Castro and his system of government have “been there for the last 60 years and counting and he destroyed each and every one who helped him, the Catholic Church, everybody.”

Alvarez mentioned that Castro, the leader of the communist movement in Cuba who ran the country as a communist dictator for many decades, was once asked whether he actually was a communist.

“He went crazy,” Alvarez recounted. Castro claimed to be a Catholic, educated by the Jesuits, who was even supported by some priests.

Alvarez praised President Trump, who was present at the event, for having entered the political arena five years ago. “He could have been just having a good time on one of his many beautiful golf courses right now, but yet he gave up enjoying the fruit of his labors to do this,” Alvarez said.

“I thought you were a little crazy for the sacrifice you were about to take,” the businessman told the President about his thoughts during the 2016 election season, “but I predicted that we were going to elect you in November, and I was going to see you in the White House in January. Thank you very much!”

“I never forget about my dad who only had a sixth-grade education, but I think he was the greatest philosopher I ever met,” Alvarez said. “He used to tell us how lucky he was, because he was able to come from Spain to Cuba, and then he came from Cuba to the United States.”

“And he saw me graduate from college, and that was the biggest prize he ever had, and he said: Don’t lose this place, because you’re never going to be as lucky as me, because if you lose this place, you have no place to go,” he added. “So with that, please keep that in mind, and please, people, explain that to our young people who are demonstrating out there: Don’t be useful idiots.”

Alvarez said there was “no other country in the world” where you can “start a business from the trunk of your car, and within a very few years, with hard work, commitment, and all of the core values that we learned from this very culture of ours, we can become very important to our future. We can become those people who make the next generation better than the one before.”

He also indicated that America was “the only country” needing to close its borders, “because everybody in the world wants to come over here.”

The riots of the Black Lives Matter movement have been linked to far-left activism. Patrisse Khan-Cullors, one of the three founders of the Black Lives Matter Global Network Foundation, publicly admitted that she and fellow founder Alicia Garza, an open homosexual, “are trained organizers. We are trained Marxists. We are super versed on, sort of, ideological theories. And I think that what we really try to do is build a movement that could be utilized by many, many black folk.”

Many activists have also called for defunding the police. “Though activists and officials differ on how much they want forces to be restructured, the ideological goal of defunding is abolishing traditional policing altogether,” according to The New Yorker. “Advocates want leaders to divest from forces and reinvest in a vision of public safety that includes economic and social security for the most marginalized in society.”

Democrat Senator Bernie Sanders had, like Castro in Cuba, as Alvarez explained, called for free education by abolishing college tuition and canceling all student debt.

Several Democrat legislators have also called for free health care, often termed “Medicare for All.” Providing Medicare to everybody “would save the American people a very large amount of money,” said Congresswoman Alexandria Ocasio-Cortez. “What we see as well is that these systems are not just pie in the sky. Many of them are accomplished by every modern, civilized democracy in the Western world. The United Kingdom has a form of single-payer health care — Canada, France, Germany. What we need to realize that (sic) these investments are better and they are good for our future.”