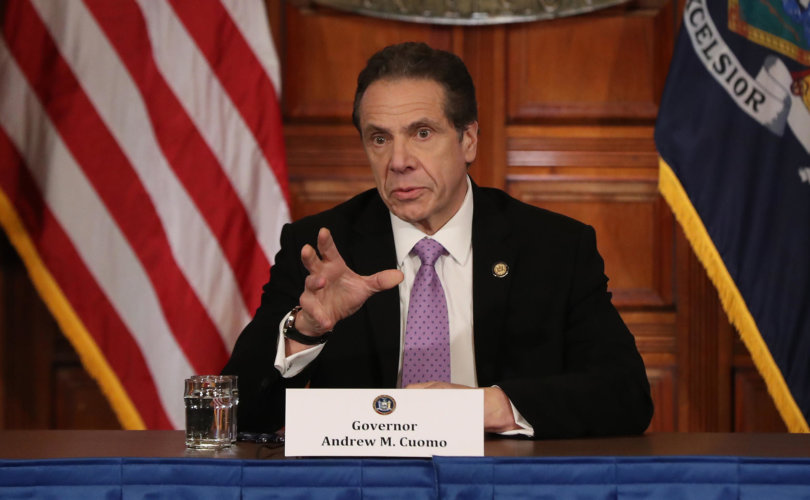 NEW YORK, October 6, 2020 (LifeSiteNews) – In a press conference on Monday, New York Gov. Andrew Cuomo issued a threat to Orthodox Jews as well as to the wider religious community when he warned that he would take measures to close down synagogues and places of worship for violations of COVID-19 restrictions.

“I have to say to the Orthodox community tomorrow, ‘If you’re not willing to live with these rules, then I’m going to close the synagogues,’” Cuomo declared. Earlier in the news conference, he said, “We know religious institutions have been a problem.”

Gov. Andrew Cuomo: “I have to say to the Orthodox community tomorrow, 'If you're not willing to live with these rules, then I'm going to close the synagogues.'” pic.twitter.com/QWOPvZMbFI

The governor also stated that unless religious communities agreed to follow his rules regarding the wearing of masks and physical distancing, they would be forcibly shut down. “If you do not agree to enforce the rules, then we’ll close the institutions down,” he said. “I am prepared to do that.”

The statements challenge the autonomy of churches as well as the free exercise of religious worship, as protected in the First Amendment. Despite an apparent constitutional breach, Cuomo mentioned that he would not hesitate to close any place of worship should it be in violation of the measures in place to reduce the spread of the coronavirus. “We have to close a temple because it’s over 50 percent? I’ll do it,” he said. “We have to close a Roman Catholic church? I’ll do it. I had to close the St. Patrick’s Day parade. I did it.”

The comment comes in tandem with the formation of a task force that would ensure schools and religious institutions comply with the governor’s directives.

Members of this task force could possibly be stationed outside churches in order to ensure they did not exceed the maximum limit of people allowed inside. Cuomo used an example to paint a picture of a draconian future: “You’re going to be stationed in front of St. Peter’s Church. The capacity is 150. You stand at the front door. When they go over 75, you close the door and call me. And if you have any problem, the state police officer is down the block and he’ll come help you.”