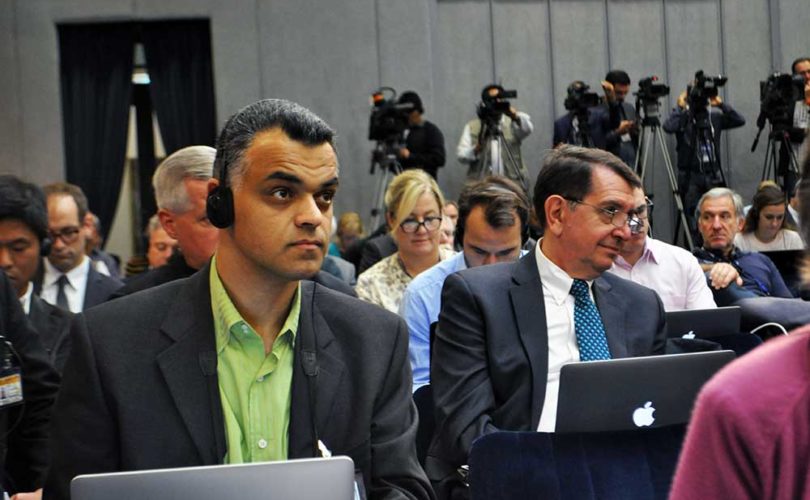 October 21, 2015 – (LifeSiteNews) –  As the Vatican’s international gathering of bishops on family issues entered its final week, two leading American prelates involved in the meeting engaged in a media skirmish over disagreements taking place there, but since then, a curious sense of conciliation has crept over the Synod.

The Ordinary Synod on the family, called by Pope Francis to address issues pertaining to the family and evangelization, has continually been pervaded by attempts from some Synod fathers to advance reception of Communion for divorced and civilly remarried Catholics and cohabiting couples, as well as acceptance of homosexuality, with resistance put forth by their orthodox counterparts.

Moves during the Synod toward disregard for Church teaching pertaining to human sexuality and the definition and indissolubility of marriage, unchangeable by its nature, have been presented under the guise of a change in pastoral practice, effectively amounting to permitting individuals in a state of objective sin access to the sacraments in contradiction to the Church’s principles.

The opposing blocs have reportedly been able to voice their respective opinions during this year’s Synod sessions after Pope Francis called for more openness in Synod discussions in the 2015 session, and while Synod sessions are closed to anyone not taking part, evidence of conflict has emerged via individual bishops.

Augmenting unease are concerns over alleged manipulation of the Synod process.

Washington Cardinal Donald Wuerl spoke with three separate publications on Sunday, according to Religion News Service, suggesting that Synod fathers expressing concern over this year’s process and the Synod working document have done so simply out of dislike for Pope Francis.

“They just don’t like this pope,” he told the Jesuit-run America Magazine. He also said they find the Church that Pope Francis is calling for “somewhat threatening.”

These people “are speaking, sometimes surreptitiously, sometimes half-way implying, then backing off and then twisting around.” Cardinal Wuerl said, thereby having “tainted” the synod process with the public through baseless claims of manipulation, ultimately casting a doubt over its end result.

That same day Cardinal Wuerl told the National Catholic Reporter the Synod had been on of the most extraordinary efforts to arrive at a consensus from more people than have been engaged the process before, and also that the Synod had been tainted by those with concerns.

And while “There seems to be an undercurrent among some saying that these are the things that we want said …. “that is not a sign to me of intrigue, manipulation, [or] rigging.”

Numerous instances of attempts to reject Church teaching have surfaced throughout the Synod, whether via its session reports or during press conferences, but the most remarkable was the letter from 13 cardinals to Pope Francis questioning the Instrumentum Laboris (working document), the Synod process and lack of input from Synod fathers on the makeup of the composition committee for the final document.

Cardinal Wuerl’s statements were presumably made toward Philadelphia Archbishop Charles Chaput’s October 15 Wall Street Journal opinion piece where Archbishop Chaput expressed that the many assurances of fidelity to Church teaching that have put forth throughout the Synod by those advocating departure from it were actually unsettling, and that a change in Church discipline would still have a negative result.

While Cardinal Wuerl didn’t specifically name anyone in his remarks to the press, Archbishop Chaput followed up in blunt fashion the following day with a reminder that Pope Francis had “explicitly invited candor and open discussion, telling Catholic News Agency, “If the welcome we gave Pope Francis in Philadelphia last month looked like ‘opposition,’ people need a trip to a really good eye doctor.”

Liberal bishops at the Synod have been saying for some time there is no cause for concern over how the Synod is developing, with Chicago Archbishop Blasé Cupich telling reporters at the Vatican last Friday,  “I don’t share the anxiety at all.”

Cardinal Wuerl’s dismissal of any Synod rigging went back as far as an October 12 report from Crux when he stated of the 2014 Synod session “I had never been in a synod that has been as open, and the one we’re in right now follows that same openness,” and criticizing conspiracy theories, with, “Everything looks yellow to the jaundiced eye.”

Despite reports of conflict throughout the Synod, this week reliably orthodox Synod fathers seemed to be repudiating claims that contention is still occurring during the Synod.

While Cardinal DiNardo said he didn’t think the “Kasper Proposal” to allow Communion for divorced and civilly remarried Catholics was “coherent,” the Galveston-Houston prelate, one of the 13 cardinals to sign the letter expressing concern over the Synod to Pope Francis, also said the Synod differences had been embellished, telling Crux, “Some people are making out that internal to the synod there are all kinds of horrible things going on, but there really aren’t.”

Cardinal Napier had also endorsed The Rigging of a Vatican Synod? An Investigation of Alleged Manipulation at the Extraordinary Synod on the Family, the book by National Catholic Register journalist Edward Pentin, and he stated at an October 20 press conference that only a few people had seen last year’s controversial mid-term report before it was shown to the press, as well as having expressed concern, as one of the drafters of last year’s final report, that something ideological was being pushed. But the cardinal said at the same briefing that the pope had addressed the concerns raised in the 13 cardinals’ letter, and that this year, there was a “huge difference in the sense of confidence and trust,” and that “everyone was going to work at this synod, work together as a team.”

Archbishop Chaput also appeared to take a different turn in his assessment of the Synod in his October 21 weekly column,

After sharing a letter he received on October 21 from Pope Francis dated October 5, thanking him for his hospitality while the Holy Father visited Philadelphia for the World Meeting of Families, Archbishop Chaput downplayed the disagreements that have occurred during the Synod.

Differences among the synod fathers, he said, including serious ones on serious issues, are part of the natural flow of discussion, and that the Synod’s bishops need to deal with these matters candidly, or no good would result. In an apparent reference to Synod difficulties, the archbishop also wrote that no matter what happens, God remains with his Church.

“But “warring camps” simply don’t exist. The mood among the synod fathers has been far friendlier than any commentators seem to imagine,” Archbishop Chaput said. “There are no “revolutionaries” or “reactionaries” in the synod hall – only bishops sincerely trying to face sensitive issues and chart the right course for the Church in the light of the Gospel.”

INTERVIEW: Bishop Schneider warns of ‘spirit of Satan’ at Synod on the Family

Will the real Satan at the Synod please stand up?