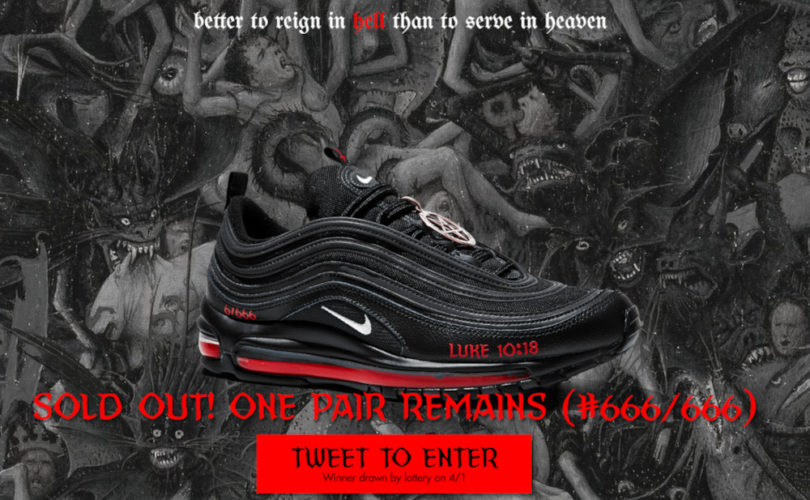 The shoes, based on Nike’s “Air Max 97” design, display the infamous numeral “666” attributed to the Beast in St. John’s Apocalypse. The limited production will amount to 666 pairs only. There is also a reference to a Bible verse, Luke 10:18, printed on the side. The verse states: “I saw Satan fall like lightning from heaven,” referring to the success of Christ’s disciples’ in subduing demons in Christ’s name.

It is unclear if the creators of the shoes realize that this particular passage highlights God’s victory over Satan. In any case, their advertising states it is “better to reign in hell than serve in heaven,” and the product itself appears to promote Satan and sin.

MSCHF’s “Satan Shoes” are not the company’s first foray into controversial products. Previously, the company released a rubber chicken bong and a pair of “Jesus Shoes” using the same Nike Air Max 97s that their “Satan Shoes” are based upon. The “Jesus Shoes” also have a verse from Scripture stitched on the side, this time Matthew 14:25, which states: “And in the fourth watch of the night he came to them, walking on the sea,” a reference to the fact that the soles of the shoes are filled with a sample of water from the river Jordan, giving the impression that wearers are “walking on water.”

Nike told LifeSiteNews it does “not have a relationship with Lil Nas X or MSCHF.” Nike further distanced themselves from the “Satan Shoes” project, claiming that they “did not design or release these shoes and we do not endorse them.”

“The lawsuit argues that Nike must maintain control over its brand ‘by setting the record straight’ about what products bear its distinctive ‘swoosh’ logo,” reported NBC News. “In fact, there is already evidence of significant confusion and dilution occurring in the marketplace, including calls to boycott Nike in response to the launch of MSCHF’s Satan Shoes based on the mistaken belief that Nike has authorized or approved this product.”

The demon-themed black and red shoes sold out shortly after going on sale Monday at the eye-watering price of $1,018 a pair. For the price, buyers get a bronze pentagram pendant fixed atop the laces and an upside down cross stitched into the tongue (which is the symbol of St. Peter and is not demonic, an aspect of Christian iconography that is often misunderstood). But perhaps most controversially, the soles contain red-colored ink with a drop of real human blood added.

The blood was taken from MSCHF’s own employees, according to a report in the New York Times. “About six of us on the team gave [blood],” company co-founder Daniel Greenberg said, qualifying that not much blood was donated in total. Greenberg told the Times that the team extracted their own blood without the assistance of medical personnel for the purpose of the shoe line.

Rapper Lil Nas X, who has created the shoe line in partnership with MSCHF, released a music video to accompany his new single “MONTERO (Call Me by Your Name),” which depicts the music star as falling from heaven down a fireman’s pole and landing in hell, where he then gyrates on Satan’s lap. The song contains lyrics that celebrate the rapper’s homosexual lifestyle, characterized by the Times as him “cheerfully [rejoicing] in lust as a gay man.”

Lil Nas X has reportedly been garnering a following of children, indeed actively cultivating such a fanbase. Conservative commentator Matt Walsh of The Daily Wire wrote on Twitter that Lil Nas X “appeared on Sesame Street. Released a children’s book,” lamenting that he is now “pushing satanism and pornographic images and lyrics onto that same audience” with his latest endeavours.