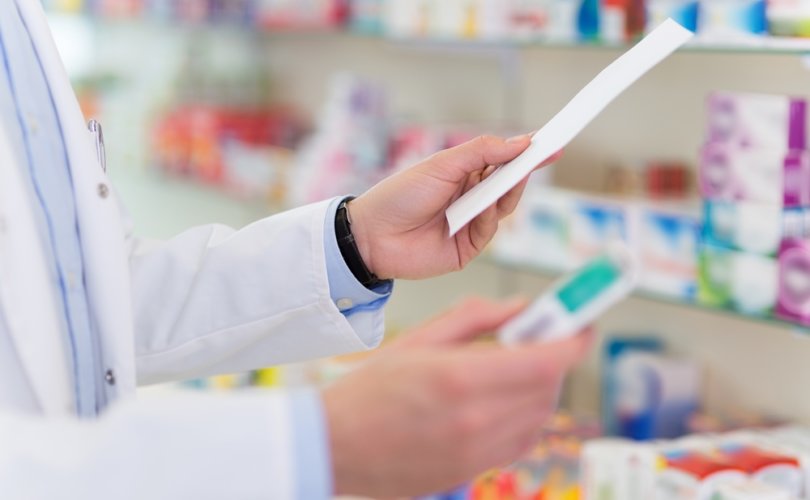 FOUNTAIN HILLS, Arizona, July 27, 2018 (LifeSiteNews) – CVS Pharmacy has fired a pharmacist who refused to fill a transgender hormone prescription and issued a public apology to the gender-confused customer, a biological man who identifies as a “woman.”

On July 19, “Hilde” Hall wrote a blog post on the left-wing American Civil Liberties Union’s (ACLU) website detailing his version of the incident, which occurred in April. He entered the CVS with his first prescription for hormone therapy, which was meant to begin giving his body more feminine features.

Hall claims the unidentified male pharmacist refused to fill one of the three prescriptions, didn’t give him a clear reason for doing so, and “just kept asking, loudly and in front of other CVS staff and customers, why I was given the prescriptions.” The pharmacist allegedly refused to return his doctor’s prescription note so Hall could take it to a different pharmacy, as well.

“The office staff [at Hall’s doctor’s office] tried to intervene by calling the pharmacist, but he still refused to fill my prescription without explicitly explaining why,” he continues. “My doctor ended up having to call the prescription into the local Walgreens, where the medication was filled without question.”

Hall claims that multiple calls to CVS’ corporate complaint line failed to procure an explanation or apology, so he filed a complaint with the Arizona State Board of Pharmacy (ASBC). CVS took action soon after the story broke.

CVS fired the pharmacist and issued a public apology by July 20, the Arizona Republic reports.

“CVS Health extends its sincere apologies to Ms. Hall for her experience at our pharmacy in Fountain Hills, Arizona last spring,” CVS senior director of corporate communications Mike DeAngelis said. The pharmacist’s behavior “does not reflect our values or our commitment to inclusion, nondiscrimination and the delivery of outstanding patient care.”

“We also apologize for not appropriately following up on Ms. Hall's original complaint to CVS, which was due to an unintentional oversight, DeAngelis added.

The Republic notes that the ACLU’s Arizona chapter “encouraged” Hall to go public with the story, with the organization’s Steve Kilar stating Hall’s purpose “was to make sure people know this shouldn't happen to them and, if it does, they can take action.”

Having won an apology, Hall does not intend to pursue further legal action. The ASBC declined to confirm to the paper whether it had opened an investigation based on his original complaint.

Arizona law expressly protects the conscience rights of pharmacists not to fill abortion-related prescriptions and says companies must accommodate pharmacists’ religious convictions, but does not specifically protect the right to refuse other controversial prescriptions, such as hormone treatments.

DeAngelis said CVS’s normal policy for such situations was to have pharmacists notify their superiors of potential religious conflicts in advance, so alternative arrangements to provide controversial services can be made.

Many argue that, regardless of the legal questions of specific cases, promoting “gender transition” is bad medicine.

Earlier this month, the Annals of Internal Medicine published a study finding that transgender “women” on hormone therapy were 80% to 90% more likely to experience a stroke or a heart attack than actual women. Other studies have found that even full gender reassignment surgery often fails to resolve gender-confused individuals’ heightened tendency to engage in self-harm and suicide.

Regardless, the anonymous pharmacists’ actions are a stark departure from CVS’s whole-hearted support for the LGBT agenda at the corporate level.

The left-wing Human Rights Campaign (HRC) lists CVS as a signatory to its Business Coalition for the Equality Act, which it describes as “federal legislation that would provide the same basic protections to LGBTQ people as are provided to other protected groups under federal law.” HRC also gives CVS Health Corp. 100% ratings on alignment with its positions.