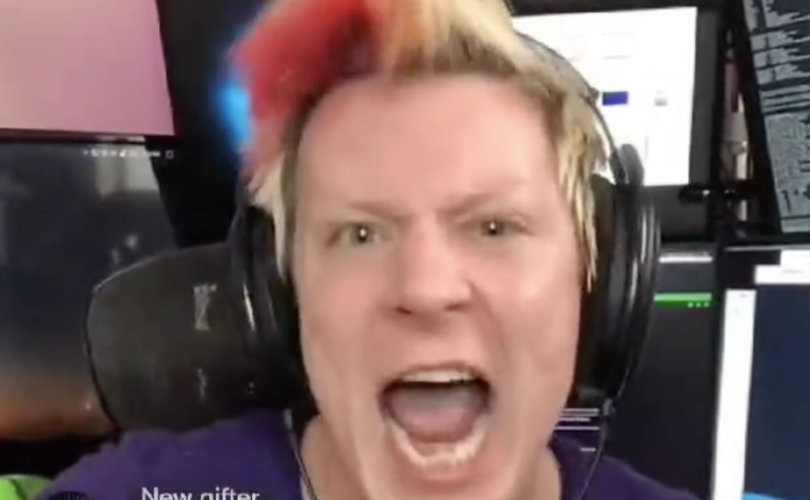 Caution: Severely vulgar language in both videos below.

(LifeSiteNews) — A self-proclaimed cyberterrorist has taken credit for hacking the Christian crowdfunding site GiveSendGo and releasing the names of those who donated money to the Canadian truckers’ Freedom Convoy, leading to some donors being harassed.

In a series of unhinged TikTok video rants, hacker Aubrey Cottle gleefully proclaimed, “I doxed the truckers. I did it. It was me!”

“I hacked GiveSendGo, baby, and I’d do it again!” screeched Cottle, who also goes by the name Kirtaner.

“I did it, I did it,” screamed the crazed hacker at his victims. “Come at me, what are you going to do to me, huh?

“This is Aubrey Cottle. He hacked GiveSendGo and he doesn’t care if anyone knows it,” tweeted journalist Ian Miles Cheong, editor of Human Events. “He’s live on TikTok bragging about doxing and releasing the info that’s currently getting thousands of people fired from their jobs for donating to the Freedom Convoy.”

This is Aubrey Cottle. He hacked GiveSendGo and he doesn’t care if anyone knows it. He’s live on TikTok bragging about doxing and releasing the info that’s currently getting thousands of people fired from their jobs for donating to the Freedom Convoy. pic.twitter.com/HJW7BBRc4z

In another TikTok video Cottle seemed to beg for a violent confrontation with Canadian truckers.

GiveSendGo hacker tells the Truckers to come at him. pic.twitter.com/jXvVZMvrcO

“Cottle is a left-wing extremist who took credit for the hack (and displayed his severe mental instability) in a TikTok proclamation where he bragged about his success,” wrote Sundance at The Conservative Treehouse (TCT).

But Cottle apparently was not working as a lone wolf, and some believe his assertion that now, as in the past, he is working tacitly with Canadian government and law enforcement agencies.

Cottle is a “known federal asset” who “has a self-admitted history of working with various police or intelligence services from the RCMP to the FBI to French ‘authorities’ to Interpol,” explained George.

Cottle shared the vast trove of data files he obtained with media in Canada and RCMP officials “so the government and media could work together to target the donors for retaliation under the federal Emergency Act, as deployed by Prime Minister Justin Trudeau,” explained the TCT report.

GiveSendGo founder Jacob Wells told Fox News the cyberattack and rapid dissemination of the donor files shows a deliberate, “well-orchestrated,” and politically motivated doxing effort, where the hacker closely coordinated his efforts with the Canadian government and state media.

Wells plans to file criminal charges against Aubrey Cottle; however, the fact that government officials coordinated with the hacker does not leave many avenues despite the illegal nature of the events.

When the government is the one openly committing the crime, and contracting with the criminal elements to carry out the crime, where do you go?