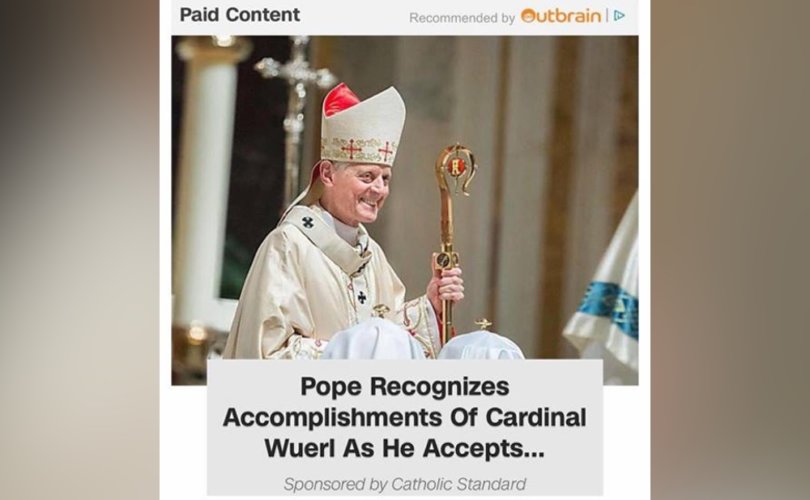 WASHINGTON, D.C., October 16, 2018 (LifeSiteNews) – The Archdiocese of Washington purchased advertising on CNN’s website to promote Pope Francis’s complimentary regard for outgoing Cardinal Archbishop Donald Wuerl – paid for through its communications office, which gets financial support from Catholics in the pews.

The ad is flagged by CNN at the top with the message, “Paid Content,” and a disclaimer appears beneath the archdiocese’s own headline, resembling a sub-headline, stating, “Sponsored by the Catholic Standard.” The Standard is the newspaper for the Archdiocese of Washington.

Journalist George Neumayr saw the ad and posted about it Saturday on Facebook.

“DC Catholics: Check out this propagandistic ad on CNN's Web site, which Wuerl is financing with your donations,” Neumayr wrote. “Notice at the bottom of the ad “sponsored by the [Archdiocesan of Washington] Catholic Standard,” which just means dollars you have donated to the archdiocesan annual appeal.”

After more than two years having passed since Wuerl, 77, first submitted his resignation – obligatory for bishops at age 75, and the responsibility of the pope to either accept or delay – Pope Francis at last accepted Wuerl’s resignation just last week.

Francis agreed to take the resignation after Wuerl’s having visited Rome to discuss it with him last month and Wuerl’s September 21 request to be released from his office.

Wuerl’s resignation, following upon immense pressure for him to step down from various corners — including lay Catholics and clergy in his archdiocese — due to his alleged mishandling of clerical sex abusers from his time as bishop of Pittsburgh, has been couched in glowing terms from Francis and papal confidants.

CNN, on whose website the archdiocese’s ad for Wuerl was placed, had aired a report in August that had Wuerl denying grand jury evidence he’d covered up clergy sex abuse as bishop of Pittsburgh – leading to widespread calls for his resignation.

The Pope has asked Wuerl to remain as administrator of the D.C. archdiocese until Francis names his replacement.

The handling of Wuerl’s resignation has served to signal continuation of the status quo in the Church’s Church sexual abuse crisis, and further stoked the frustration of Catholics anxious to see accountability the abuse scandal. That archdiocesan operating funds are going to public relations for the embattled Cardinal is likewise not likely to sooth lay Catholics’ frustration over the crisis.

LifeSiteNews inquired with the archdiocese for confirmation of the CNN ad buy and any involvement of funding from Catholic donations, and did not hear back.

The Catholic Standard is part of the Archdiocese of Washington’s Secretariat for Communications, according to the archdiocese’s financials, primarily funded by Carroll Media Company, which is an archdiocesan agency.

The media company made up $1,756,000, or 1 percent, of the Archdiocesan Service and Educational Agency expenses for Fiscal Year ending June 30, 2017. With a projected 2018 goal of $14,300,000 for the archdiocese’s annual appeal, current archdiocesan appeal allocation information has $984,154 of annual appeal funds going to its Communications and Outreach.

The Archdiocese of Washington had also created a website in August on “The Wuerl Record,” meant to defend Wuerl’s handling of past abuse cases.

TheWuerlRecord.com drew considerable criticism and was swiftly taken down to then direct visitors to archdiocesan press releases on the abuse crisis.

The Catholic Standard posted a number of Wuerl-focused pieces on Friday; one concerning his legacy containing the statements from Wuerl and Francis on his resignation, a second on milestones of Wuerl’s tenure in the D.C. archdiocese, another with the full text of the pope’s letter to Wuerl, as well as one with Wuerl’s statement, statements from the archdiocesan chancellor and auxiliary bishops, and a yet another on Wuerl’s celebration of Mass with archdiocesan employees Friday.

Neumayr, author of The Political Pope, has been conducting on-the-ground investigative reporting about the abuse scandal’s latest developments, particularly related to Wuerl and McCarrick.

The back and forth between Wuerl and the Pope regarding Wuerl’s resignation comes after the August 14 release of the Pennsylvania grand jury report implicating at least 300 priests in six dioceses of abuse over seven decades, which also raised charges that Wuerl protected clergy accused of sexually abusing minors during his time there.

Wuerl, who had already faced criticism for his response to the Archbishop-Theodore-McCarrick scandal, defended his record in Pittsburgh, which drew Pennsylvania Attorney General Josh Shapiro to disagree with Wuerl publicly, saying the cardinal was not telling the truth.

Wuerl initially pushed back on the charges and took no steps to resign, but later went silent, and even seemed at one point to disappear from public view before conceding on the need to resign.

He canceled his scheduled keynote address at the World Meeting of Families in Dublin in August and backed out of a trip with the Legatus Catholic business leaders’ organization set for September.

The testimony implicates Francis and other high-level prelates in covering for accused serial sex abuser McCarrick.

In it Viganò also says Wuerl knew that McCarrick had been sanctioned by Pope Benedict XVI, and was not supposed to be functioning in public ministry, even saying that Wuerl has lied “shamelessly” about his knowledge of McCarrick’s sexual predation.

Wuerl denied the allegations in the testimony upon its release, and dismissed Viganò’s charges as ‘not faithful to the facts’ in a recent interview, terming Viganò’s assertion that he had lied about his awareness of McCarrick a “gratuitous insult.”

Francis has made ostensive criticisms of Viganò since the testimony’s release, speaking ominously again and again in his Mass homilies about the Great Accuser, which is another name for Satan, who is dividing the Church.

Francis, who praised Wuerl for his “nobility” and “docility to the Spirit” in his letter accepting Wuerl’s resignation, took a similar route in the letter, quoting Matthew to reference, “the father of lies who, trying to hurt the shepherd, wants nothing more than that the sheep be dispersed.”