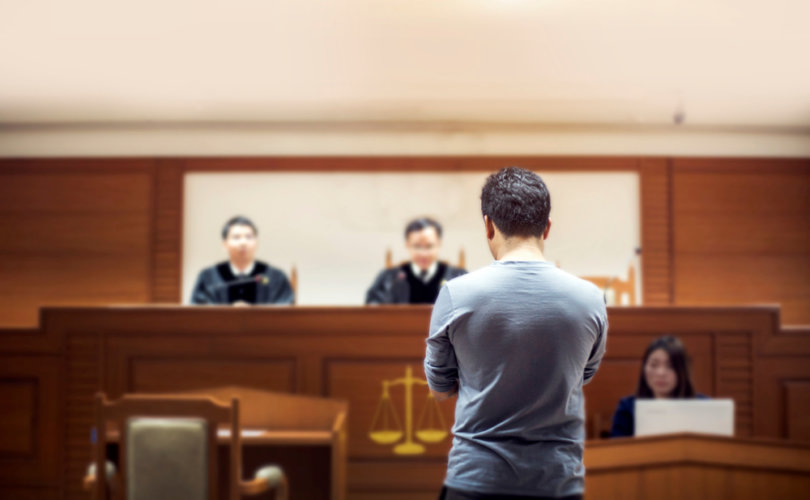 VANCOUVER, British Columbia, April 25, 2019 (LifeSiteNews) — A Canadian judge found a father guilty of “family violence” for publicly and privately referring to his 14-year-old daughter — who identifies as a boy — as a girl.

British Columbia Supreme Court Justice Francesca Marzari also issued a yearlong restraining order forbidding the father from speaking publicly and to reporters about his legal action to stop his daughter, referred to in court documents as AB, receiving testosterone shots against his wishes, reported the The Federalist.

Marzari further forbade the father from referring to his daughter as a girl, either directly to her or to third parties, from using “her birth name,” and from “attempting to persuade” his daughter “to abandon treatment for gender dysphoria.”

The father’s “expressions of rejection of AB’s gender identity, both publicly and privately, constitutes family violence against AB,” she wrote in her April 15 ruling.

The father argued that he had a right as a parent to express what he believed to his daughter and “the world at large,” Marzari wrote.

But his “rights do not include harming his child.”

Marzari’s order is the latest blow against British Columbia father, referred in court documents as CD, in his legal battle to stop his troubled daughter’s transition. CD is separated from AB’s mother, and they share joint custody of the teenager.

Justice Gregory Bowden ruled in February that AB did not need her father’s consent to begin testosterone shots and that not affirming AB in her chosen gender was “family violence.”

AB has received “regular injections at British Columbia (BC) Children’s Hospital over the course of the last two months,” The Federalist reported.

CD appealed the decision and continued to refer to his daughter as a girl in media interviews, including telling The Federalist he does so “because she is a girl. Her DNA will not change through all these experiments that they do.” CD did likewise in interviews with Kari Simpson of the BC parents’ rights group Culture Guard.

As a result, AB’s lawyers — who notably include longtime “queer” activist Barbara Findlay — asked the court for a restraining order against CD, alleging his conduct was putting AB at risk.

As evidence against her father, AB recounted that during one visit, CD sat her down to watch a video about “Maxine” — a pseudonym publications use to refer to her — and she refused.

The teen also alleged her father “was unable to call AB by his chosen name or gender, and the visit ended prematurely and badly,” Marzari wrote.

For his part, AB’s father argued “others have pressured and co-opted” his daughter, so that “AB is not speaking for himself,” the judge wrote in her ruling.

According to documents of the earlier case, AB has been troubled since her parents separated in 2013. She “suffers from depression and has attempted suicide at least four times,” and went through a “lesbian stage” in Grade 7.

CD described his daughter as “very vulnerable” in a February article in The Federalist. He believes she lacks the “mental capacity and emotional maturity” to make the decision to have testosterone treatments, which have some irreversible effects.

When AB claimed to be transgender at age 13, school staff sent her and her mother, without her father’s knowledge, to transgender activist psychologist Dr. Wallace Wong, who recommended she begin hormone therapy.

CD has since filed a complaint against Wong to the College of Psychologists of British Columbia, alleging Wong unethically and unprofessionally led his child to seek a transition.

Marzari rejected CD’s activist argument as not supported by evidence and cited Justice Bowden’s earlier finding that AB was competent to consent to medical treatment.

But Marzari herself has a long history of LGBT and abortion advocacy with West Coast LEAF before her 2017 appointed as judge, according to Culture Guard’s Simpson.

Moreover, AB’s lawyer and lesbian activist Findlay is listed as a respondent in the original case heard by Bowden.

CD’s lawyers also argued his Federalist and Culture Guard interviews were “hearsay,” and that he had no intent to violate the ban on revealing his daughter’s identity.

Marzari ruled CD did not disavow what was reported in those sources and they were “reliable enough” for the purposes of deciding the issue.

“However, I am not concerned with the truth of what CD has said in those interviews, but with the words having been said at all,” she wrote.

The father “does not accept this court’s previous determination that referring to AB with female pronouns or otherwise denying his gender identity is causing AB harm,” Mazari observed.

CD’s behaviour “both before and after the determinations made by this Court indicate that he is likely to continue to engage in conduct that constitutes family violence against AB,” she wrote.

That would include “conduct already determined to be family violence by this court, and the publication and sharing of deeply private information that is harmful to AB.”

Hence, the need for the restraining order.

As well as forbidden from referring to his daughter as a girl, CD cannot “directly, or indirectly through an agent or third party, publish or share information or documentation relating to AB’s sex, gender identity, sexual orientation, mental or physical health, medical status or therapies” except with lawyers and medical personnel involved in the case.

Culture Guard’s Simpson blasted Marzari as an “activist” judge and the ruling as a violation of CD’s free speech and parental rights.

“(I)f you think this isn’t ultimately going to be tried in the U.S., you’re dreaming,” he warned.

CD’s appeal of Bowden’s ruling will be heard May 14, The Federalist reported.