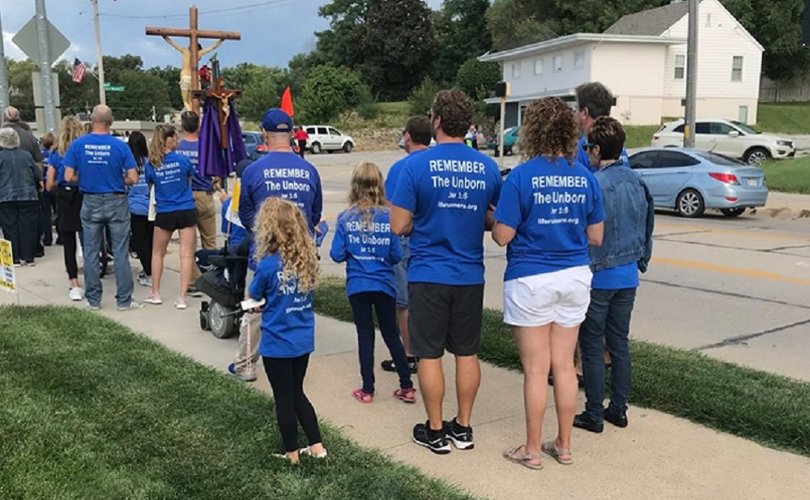 Brad Allen participates in a Rosary Walk with Life Runners.

September 20, 2019 (LifeSiteNews) — The Omaha World-Herald newspaper refused to print an obituary or in memoriam ad for an aborted child, the baby’s father says, and pro-life advocates say the paper’s decision suggests pro-abortion discrimination.

The World-Herald initially refused the father’s request to print an obituary for his son because aborted children don’t get a death certificate. The newspaper then agreed to publish an in memoriam ad if it did not use the word abortion and had no mention of Life Runners (liferunners.org) because it is pro-life organization. The father had originally named Life Runners for memorial contributions for his child.

After the father, Brad Allen, submitted material for the in memoriam, he said, the World-Herald then switched course again, refusing to take the ad or discuss specifics.

“In the struggle for my child’s life the mother’s ‘right’ to an abortion utterly overwhelmed my right to protect and provide for my own child,” Allen said. “I couldn’t even bury my own child. I’m now discovering my right to even memorialize my own child is being overwhelmed. I didn’t expect the Omaha World-Herald to deny me that.”

LifeSiteNews inquired with the World-Herald but did not hear back by press time.

Billionaire investor Warren Buffett, also an abortion donor into the hundreds of millions of dollars, owns the Omaha World-Herald.

“I wanted Liam to be memorialized like any other life,” Allen said. “Liam had a family and had a life to celebrate. In the final drafts I didn’t mention ‘abortion’ or reference Life Runners. I met the paper’s terms.”

The unborn baby, named Liam Michael Allen by his father, was aborted at 10 weeks of age by the world’s current most notorious late-term abortionist, LeRoy Carhart, at Carhart’s Bellevue, Neb. abortion facility.

Liam’s father, Life Runners founder and President Dr. Pat Castle, Castle’s wife Angi, and others, worked for weeks to convince Liam’s mother not to abort him, to no avail.

Castle and his wife offered to adopt the baby, something they’ve done many times before.

“Whatever it takes to end the killing of 2,500 kids in our country alone today,” Castle told LifeSiteNews.

Abortion will not take away the pain

Allen, who is married, conceived his child in an affair with his next-door neighbor, a single mother whose two young sons are close in age and friends with Allen’s two daughters.

Allen recognized his mistake and begged the mother not to abort their child, regardless of the status of their relationship. And despite the betrayal, Allen’s wife came beside him to advocate for the child’s life.

“God’s fingerprints are all over this redemptive work to stop any more damage from the affair, and begin healing,” Castle said. “Minister to the mother, bring dignity to Liam’s life, and help Brad fight for his son.”

Allen said he just wanted the child to live.

“Mr. Mayberry then asked, ‘What is the purpose of this obituary?’” said Allen. “My reply was, ‘The same purpose of all your other obituaries, to celebrate the life of the deceased.’ He said the obituary could not run and was denied.”

On August 26, Allen emailed the World-Herald’s obituary desk informing staff that he no longer wanted an obituary and instead requested an in memoriam ad, which runs in the same section. In memoriam ads do not require a death certificate. They are simple notes written to honor the deceased. Like regular obituaries, they are paid ads that run in the paper.

Mayberry called him that afternoon, Allen said, agreeing to publish an in memoriam ad if it did not use the words “aborted” or “abortion,” and there was no mention of Life Runners.

“Mr. Mayberry explained that the paper’s staff had researched Life Runners, and it is a pro-life organization, and they didn’t want that in the ad,” Allen told LifeSiteNews. “No further explanation was given.”

“This request not to mention Life Runners for donation requests struck me as unusual because obituaries very commonly request donations to causes related to the death of the deceased,” he said. “I agreed to comply with those terms.”

Both drafts contained a personal message:

Liam: in just 10 short weeks of life you touched many lives. You established a mini legacy in your short life. Many know your name and some even call you “Saint Liam.” You make many of us so proud. Your life was so valued. What a blessing and honor to know and love you. Liam’s expected birthday was February 11, 2020. Memorial gifts may be given to any organization that values life.

The request included an ultrasound image of an unborn child Liam’s age.

Allen said he then received a phone call from Mayberry on August 30, where Mayberry told him, “We are not running the ad.”

Allen said he asked why, explaining he’d met the terms.

He recounted that Mayberry’s reply was, “We are not running the ad. The paper is declining.”

“He would not explain where or how it did not meet the paper's terms,” said Allen. “He again said the paper’s position is, they are not running the ad, and he ended the phone call. The World-Herald is now unwilling to work with me on this request.”

Allen said his effort and desire to memorialize his son in the newspaper is simply part of mourning his child’s lost life, and recognizing that the baby’s life, no matter how brief, had meaning.

While a newspaper typically determines its publishing policy, the World-Herald’s refusal to print either memorial for the aborted baby is in open variance to the fact the state of Nebraska allows official recognition children younger than 20 weeks of age who die from for miscarriage.

But the state is unique in that as of April 2018, Nebraska provides state-issued commemorative birth certificates for miscarried children passing away prior to 20 weeks gestation — the second state in the country to offer this type of certificate, but the first to do so without requiring a minimum gestation and also making it retroactive.

Florida also offers certificates for unborn children who pass away in utero prior to 20 weeks. In that state, it applies to unborn children between nine and 20 weeks of age.

The Church says a funeral Mass can be held for any deceased child, even one who died due to abortion, and that Mass has certain readings and prayers known as the “Mass for Children Who Died Without Baptism.”

Given that official reporting is mandated for aborted children, and allowed for unborn children not yet 20 weeks old who pass away, Allen’s request to memorialize his child falls in line with this official recognition of a life lost. The denial raises the specter of abortion politics.

Citizens for a Pro-Life Society founder Dr. Monica Miller and other pro-life advocates placed obituary ads for aborted children in 1988 in the Milwaukee Sentinel, and in 1996 in the Milwaukee Journal-Sentinel. The memorial service advertised in the 1988 ad was for 1,200 babies, and the 1996 service for seven.

“Their lives and thus their deaths are of no consequence”

Miller told LifeSiteNews she anticipated the ads being declined, but they were not. The Omaha World-Herald’s denial of the ad for Allen attempts to deny recognition of human life, she said.

“The refusal in this case is certainly based on the fact that the unborn are not considered persons,” Miller told LifeSiteNews. “Their lives and thus their deaths are of no consequence and thus will not be recognized.”

Miller called for Allen and others to communicate opposition to the newspaper’s decision.

“Whoever is wishing to place this ad is facing discrimination against the unborn, especially those who are aborted,” she said. “They should do all they can to call the paper to do justice towards this oppressed class.”

“An act of editorial cruelty”

Pro-Life Action League executive director Eric Scheidler considers the newspaper’s refusal to allow this father to publicly grieve for his child is “an act of editorial cruelty.”

“I can only hope that the public attention that refusal is attracting will provide an opportunity for this grieving father to draw attention to the injustice of abortion and the swath of misery that follows in its path,” he told LifeSiteNews.

Scheidler wasn’t aware of any examples of an obituary placed for an aborted child. However, his group, along with Miller’s and Created Equal, regularly memorialize the unborn with a National Day of Remembrance and other awareness-raising and advocacy efforts.

“It strikes me that refusing to publish an obituary like this provides the lie to the whole notion of ‘choice,’” said Scheidler. “We’re supposed to believe that if an unborn baby is wanted, then it’s okay to call it a baby, and value its life, but that if the child is unwanted, it’s only a ‘fetus’ and can be treated like medical waste. In other words, it’s up to the mother whether a fetus counts of not.”

“It sounds like the newspaper is insisting that, no matter what, a dead fetus cannot be mourned with this kind of public notice,” he added.

“It seems like it would be cruel for a newspaper to reject an obituary for an aborted baby,” she told LifeSiteNews. “Most mainstream newspapers have a pro-abortion agenda and posting an obituary for a baby that was aborted would certainly not advance that agenda. But it certainly is disrespectful to those who are mourning the child.”