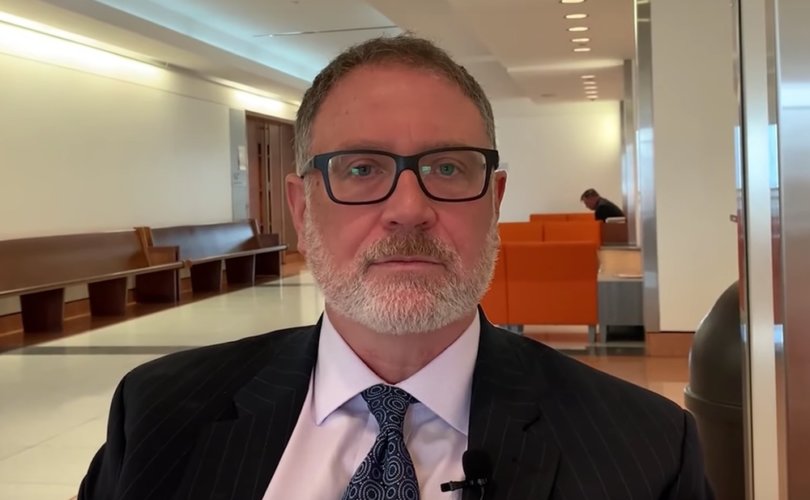 DALLAS, Texas, October 25, 2019 (LifeSiteNews) – The judge who ruled yesterday that seven-year-old James Younger’s parents will have 50/50 custody of him and joint decision-making over his medical decisions has placed both of them under a gag order. They are prohibited from speaking to the media about the case, which made national news after it was initially ignored by the mainstream media, until James and his twin Jude turn 18.

Judge Kim Cooks of the 255th District Court included a gag order on Mr. Jeffrey Younger and Dr. Anne Georgulas in her custody ruling. Dr. Georgulas has been trying to orchestrate a gender “transition” for James against Mr. Younger’s wishes.

During their messy legal battle, Dr. Georgulas’ attorneys focused on Mr. Younger’s engagement with the media during the trial, calling it an invasion of the boys’ privacy.

“This is an outrageous decision by the court that clearly is unconstitutional under the First Amendment,” said Mr. Staver. “It is obvious with the court order that the judge has made some serious mistakes because this is fairly straightforward that you can’t gag a father from talking about his son to the media.”

Jonathan Saenz, the President of Texas Values, called the gag order an “overreaction”:

“The issuance of a gag order is clearly an overreaction in this case particularly since this case was going to be decided by a judge and not a jury, but it is also an indication that Jeff Younger realized he had to do everything he could to get his message out [because] up until this point the system had not worked the way it should.”

Saenz shared his hope that this case will spur the state of Texas to pass laws protecting children.

“Moving forward we are very encouraged that state [legislators] and leaders recognize the need to address the injustice that this situation highlighted and we hope that there will be an opportunity very soon to have protections in state’s laws for children and parental rights in our state on this issue.”

Mr. Younger testified that he had not sought out any interviews and that he only accepted interviews with certain media. Mr. Younger also testified that he wouldn’t stop engaging with the media after the trial. He told LifeSiteNews, “I would like to protect every child in the United States from these abhorrent practices by the medical community.”

Gag orders have been issued in other parental rights cases. In addition to calling them unconstitutional, critics say they are used to prevent parents from sharing with the public what is being done to their children.

When Justina Pelletier was taken from her parents’ custody after they disagreed with a doctor at Boston Children's Hospital, her parents were also gagged. Justina was ultimately reunited with her family, but is still recovering from the trauma of being seized by government officials and locked in a psychiatric ward for almost 16 months, where her physical condition also deteriorated.

In July, a judge outside of Dallas issued a gag order on the Pardo family, whose four-year-old son was taken by the state over allegations of medical abuse, which came after his parents sought a second medical opinion.

Just last week, Texas Solicitor General Kyle Hawkins issued a brief on behalf of the State of Texas saying the gag order placed on the Pardo family is unconstitutional.

“The gag order is a prior restraint on speech,” he wrote. “It is plainly overbroad and cannot be squared with the First Amendment’s free speech guarantees.”

“Neither the trial court’s threadbare explanation nor the record justifies the substantial infringement on First Amendment rights.”

Dr. Georgulas’ attorneys argued during the trial that Mr. Younger speaking with the press put his children in danger despite the lack of evidence of this.

In his brief, Hawkins cited numerous cases setting the precedent for the unconstitutional nature of a gag order during court proceedings. He cited the need for evidence of imminent harm for the imposition of a gag order.

“A court may impose a gag order only upon evidence of an imminent harm that cannot be addressed by less restrictive means. See Neb. Press, 427 U.S. at 562,” the briefing stated.

Hawkins’ brief also addressed the use of gag orders to protect the privacy of juveniles both at a state and federal level.

“The U.S. Supreme Court has upheld ‘legislation aimed at protecting the physical and emotional well-being of youth even when the laws have operated in the sensitive area of constitutionally pro tected rights,’ New York v. Ferber, 458 U.S. 747, 757 (1982), but has also cautioned that ‘the objective of shielding children does not suffice to support a blanket ban if the protection can be accomplished by a less restrictive alternative,’ United States v. Playboy Entm’t Grp., Inc., 529 U.S. 803, 814 (2000).”