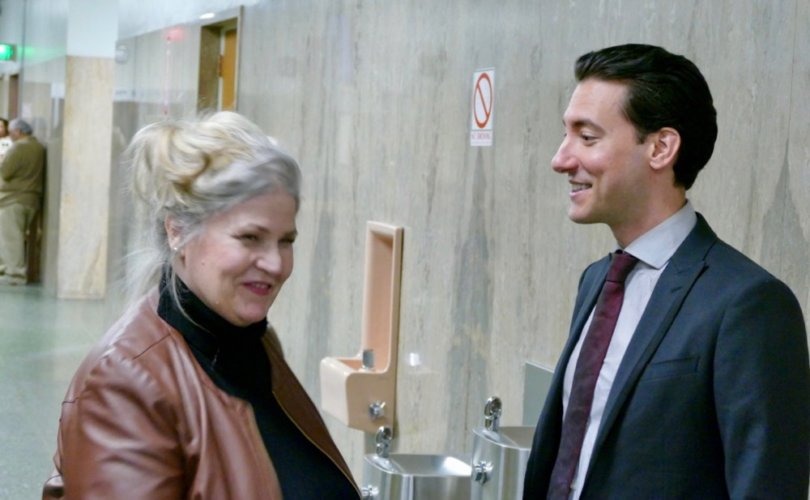 SAN FRANCISCO, California, July 30, 2020 (LifeSiteNews) — Lawyers for pro-life investigators David Daleiden and Sandra Merritt are heading to the appeal court after a San Francisco judge dropped only one criminal charge against Daleiden and two against Merritt in an online “motion to dismiss” hearing Tuesday.

Daleiden and Merritt could face up to 10 years in prison if convicted.

Defense lawyers asked San Francisco Superior Court Judge Suzanne Ramos Bolanos to drop all 10 charges against Daleiden and Merritt in a motion filed under the California Penal Code 995 provision that allows a new judge to review the findings of a preliminary hearing.

Following a September preliminary hearing, Judge Christopher Hite ruled in December that Daleiden and Merritt must stand trial on nine of an original 15 felony counts, including eight counts of illegal taping and one of conspiring to do so.

Bolanos dropped one charge against Daleiden and Merritt as “duplicative,” and ruled there was insufficient evidence to charge Merritt with illegal use of a false ID.

However, Daleiden still faces the false ID charge, and his lawyers from the Thomas More Society will be back in court in early August to argue a motion to “defer” it.

Both Thomas More Society and Liberty Counsel, which is defending Merritt, will now appeal the ruling, and both legal teams point to the political nature of the prosecution against their clients, which was initiated by Becerra’s predecessor, now-Senator Kamala Harris.

“The political careers of both Becerra and Harris have been supported and financed by Planned Parenthood,” noted a Thomas More Society press release.

“The attorney general’s political prosecution of Sandra Merritt is coming off the rails as two more of his bogus charges are now dismissed,” said Liberty Counsel lawyer Horatio Mihet in a press release.

“We will continue to vigorously defend Sandra at every stage and will not rest until this runaway train is fully derailed.”

Daleiden and Merritt secretly recorded gatherings of abortionists and representatives of organ harvesting companies, such as Stem Express and Advanced Bioscience Resources, notably during the 2014 and 2015 National Abortion Federation trade shows.

The CMP undercover videos released in July 2015 showing Planned Parenthood executives callously discussing how to dismember babies to procure intact organs and haggling over fees of aborted baby parts shocked the country. They led to congressional hearings and an ongoing Department of Justice criminal investigation into Planned Parenthood.

Defense lawyers are arguing that California law, which requires that both parties consent to the recording of conversations, does not consider conversations that can reasonably be expected to be overheard as confidential.

They are also using a Section 633.5 “affirmative defense,” which permits people to covertly tape confidential information if they believe they are gathering evidence of violent crimes against the person.

“David had a reasonable belief that he could find evidence of a felony crime of violence against human beings, namely, infanticide, that is, the killing of babies born alive with beating hearts,” stated Brejcha in a press release.

“These children – whom fetal tissue traffickers refer to as ‘intact fetuses’ – are the source from whom ‘fresh’ organs were harvested and ‘donated.’ These ‘donations’ were acquired at premium prices in dollar amounts bearing no ascertainable relationship to actual costs incurred in their ‘production.’”

Hite’s ruling made little mention of testimony presented during the hearing that backed up the affirmative defense, noted Brejcha.

This included Dr. Theresa Deisher’s testimony that fetal hearts used in research must be harvested from living babies, something she told Daleiden when he asked her about a 2012 Stanford study that used “human fetal hearts” supplied by Stem Express.

“An ABC 20/20 news program, hosted by ‘gold standard’ journalist Chris Wallace, was shown before the judge in open court. The contents quite clearly had an impact on Judge Hite,” said Brejcha.

“His terse dismissal of the defense in his final written ruling betrayed what struck us, as defense counsel, as his difficulty in dealing with this evidence. In the Section 995 hearing, Judge Bolanos likewise seemed anxious to avoid dealing with the evidence, simply inferring that Judge Hite must have not believed it.”

That was echoed by Thomas More Society lawyer Peter Breen.

“In a Section 995 hearing, a trial judge is asked to dismiss the criminal complaint – entirely or partially — because the judge at the preliminary hearing incorrectly allowed the case to move forward,” Breen said.

“That was the thrust of our argument before Judge Bolanos. She made an erroneous assumption that Judge Christopher Hite found the witnesses in the pre-trial hearing not credible, when in fact it seems clear that Judge Hite did find them credible.”

In May, CMP and Daleiden filed a lawsuit against Planned Parenthood, Kamala Harris, and Becerra in Los Angeles federal court for conspiracy to violate their First and Fourteenth Amendment civil rights.