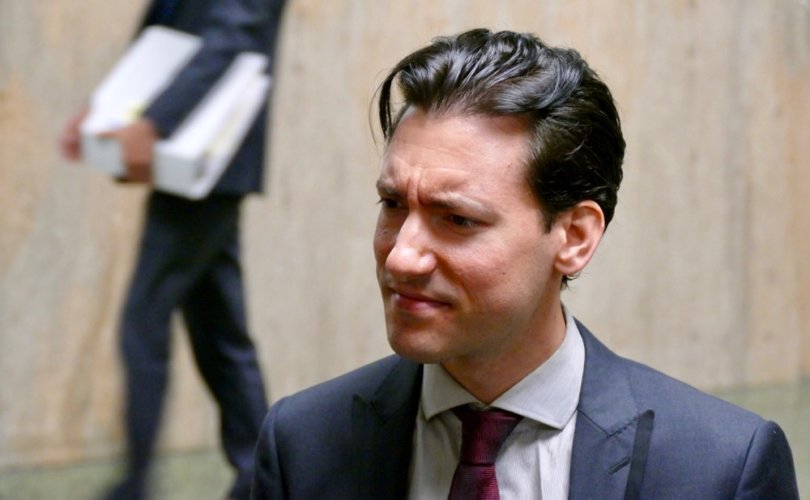 “What you saw in court [yesterday is that] U.S. presidential candidate Kamala Harris owns everything that happened in the courtroom, and everything that’s going to continue to happen in this case,” said Daleiden in an exclusive interview with LifeSiteNews after the hearing in San Francisco.

“This case was brought by Kamala Harris on behalf of Planned Parenthood and you can see the collusion in real time in the courtroom between Planned Parenthood and the National Abortion Federation and the California Attorney General’s office weaponizing the law enforcement powers of the California Attorney General’s office to come after citizen journalism, attack the first amendment, and try and cover up for their political buddies and their campaign donors of Planned Parenthood who are under current FBI and DOJ investigation right now for selling baby body parts against the law for profit,” he added.

When LifeSiteNews asked Daleiden to explain the “collusion” that he saw happening, he responded: “You can see in every break and sometimes not even during a break the [deputy] attorney general [Johnette Jauron] is constantly going back to the lawyers for Planned Parenthood and the National Abortion Federation, consulting with them, asking them how to proceed, plotting their next moves together.”

“This is something that we see in the documents that have already been produced from the investigation of this case. And, it’s something that Planned Parenthood and the National Abortion Federation need to be held accountable for because this isn’t a fair proceeding right now when an outside third party corporation — two of them, Planned Parenthood and the National Abortion Federation — are allowed to come in and try and just take over a prosecution as if it’s any other lawsuit. So, they should be thrown out of court,” he added.

Yesterday Judge Christopher C. Hite of the Superior Court in San Francisco ruled that the 14 “secret” pro-abortion “Does” named as accusers in 15 criminal charges brought against Daleiden and co-defendant Sandra Merritt in 2017 would remain sealed during the case.

Daleiden, 30, is the undercover journalist and director of the Center for Medical Progress (CMP) who in 2015 released grisly videos (watch here) exposing Planned Parenthood’s illegal harvesting and sale for profit of body parts from aborted babies.

Public outrage over the videos prompted congressional hearings and calls for the federal defunding of Planned Parenthood. Because of the damning evidence found in those videos, the CMP director now finds himself under attack by the abortion industry. The abortion industry is seeking to permanently bury the videos and put Daleiden and Merritt behind bars on charges that they illegally recorded “confidential communications” under California’s anti-eavesdropping law.

Most states allow secret recording with only the consent of one party, but California is a “two-party consent state.” Local journalists regularly use undercover recordings in California, Daleiden contends, but are not prosecuted for it.

The 14 individuals Daleiden captured in the videos as giving damning evidence of the abortion industry’s involvement in the sale of aborted baby body parts were named in the felony charges against the whistleblower anonymously, being listed in People of the State of California vs. David Robert Daleiden, Sandra Merritt as “Does” 1 through 14. The names have been publicly available on the internet since 2017 and can be easily found through online searches. They have been published in various LifeSiteNews reports regarding this case.

Harris, now a U.S. senator, announced her bid for the U.S. presidency last month, professing herself to be a “lifelong public safety and civil rights leader.”

At stake in yesterday's hearing was whether or not Planned Parenthood and the National Abortion Federation could intervene in the case. The judge said it appeared to be a “line crossed” to have the “victims” – the abortion industry – intervene to help prosecute the accused.

Also discussed in the hearing was whether or not the videos filmed by Daleiden could be used as evidence, and if so, to what extent. Daleiden’s and Merritt’s teams want the videos shown and for the public to be able to see them so they can see first hand the importance and necessity of these conversations being recorded on account of them exposing alleged criminal activity by abortion advocates.

Daleiden tweeted yesterday about the collusion he witnessed in the courtroom.

“Any press who come to the hearing in @KamalaHarris bogus prosecution of me this afternoon can watch the collusion between CA AG and @PPact @NatAbortionFed happening in real time. Kamala must be proud! #PPSellsBabyParts #ShutThemDown #ReleaseTheVideos,” he wrote.

Any press who come to the hearing in @KamalaHarris bogus prosecution of me this afternoon can watch the collusion between CA AG and @PPact @NatAbortionFed happening in real time. Kamala must be proud! #PPSellsBabyParts #ShutThemDown #ReleaseTheVideos

Daleiden’s lawyers told LifeSiteNews that the case is “just a mess.”

The judge is expected to issue a ruling in the next couple of days. While the preliminary hearing was originally scheduled for February 19, it is now moved to April 22 – May 3 after the legal teams for the pro-life advocates asked for more time to prepare their case.