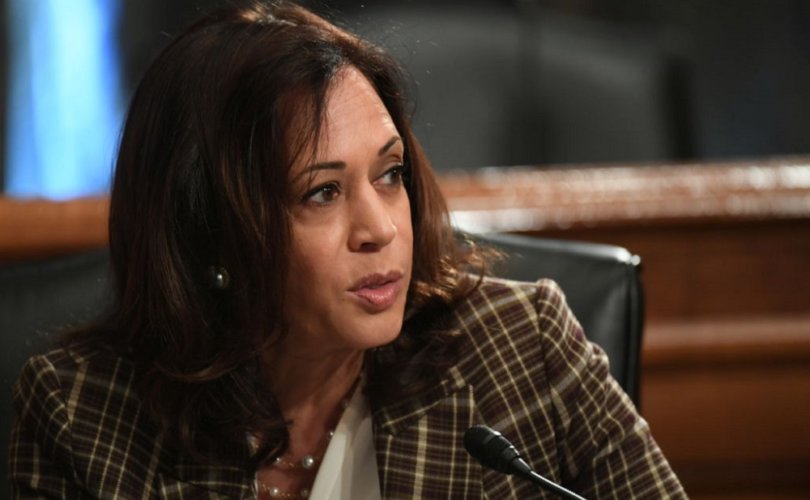 Before becoming a senator and then presidential candidate Joe Biden’s running mate, Harris worked as attorney general of California. In that position, she played a key role in defending Planned Parenthood over its sale of aborted baby parts (which violated multiple federal laws, according to undercover video of abortion industry personnel).

Instead of investigating Planned Parenthood for illegal activity, Harris announced she would investigate Daleiden and his Center for Medical Progress (CMP). She subsequently ordered a raid on Daleiden’s home while accepting the abortion giant’s donations for her Senate run.

In May, Daleiden filed a lawsuit against Harris; Planned Parenthood; and Harris’s successor, California attorney general Xavier Becerra, for a “brazen, unprecedented, and ongoing conspiracy to selectively use California’s video recording laws as a political weapon to silence disfavored speech.”

In his conversation with Breitbart News Sunday, Daleiden recounted his experience of Kamala Harris as attorney general.

“Kamala Harris, at the behest of her political patron — Planned Parenthood — targeted me for criminal punishment solely because of the content of the message that I was publishing and speaking at the time as you mentioned the undercover video series showing top-level Planned Parenthood officials callously negotiating the harvesting and sale of tiny aborted baby hearts and lungs and livers and brains,” he said.

He also pointed out the hypocrisy of Harris selectively enforcing state law on recording conversations taking place in public places like restaurants.

“In the State of California, when Kamala Harris was the attorney general, you could do undercover investigations of factory farming, corrupt chiropractors, [and] fraudulent air conditioning repairmen,” he explained.

“Local TV news journalists in California [were] filming and publishing undercover video with conversations — sometimes even in private office spaces — and publishing these videos in on [sic] a daily[,] weekly basis. Not a single one of those journalists ever had their home raided or were prosecuted by Kamala Harris’s attorney general’s office.”

Meanwhile, “if you did the exact same kind of undercover filming and publishing, and your message was something that questioned Planned Parenthood or questioned the abortion industry — the sacred cows of Kamala Harris and the San Francisco political establishment in California — then in that case, I became the first and only person involved in news gathering, the first and only citizen journalist in the state of California to ever have the California video recording law enforced against me, criminally.”

Daleiden explained that “California has a video recording law that you’re not allowed to record private or confidential conversations … If it’s a conversation that can be overheard by anybody, if it’s out in a public area, if it’s at a public restaurant, then that’s permitted. And that’s typically what news organizations and what citizen reporters do in California.”

He also emphasized Harris’ hypocrisy in handling his case, compared to other cases where her office relied on recordings of conversations in public places.

“Kamala Harris’ deputy prosecutor,” Daleiden said, “admitted a few years later in 2018 in a filing in court that the reason that I alone have become the first citizen journalist in California to be prosecuted under the California video recording law — to have that law criminally enforced against me when it was enforced against against nobody else for news gathering in California — is because of the content of the videos themselves.”

“It is blatant, unconstitutional viewpoint discrimination and invidious targeting of Americans whose message Kamala Harris disagrees with,” Daleiden commented. “So, she is a huge threat to our First Amendment civil liberties in this country.”

“We have the action items from that meeting in an email that was produced to us in discovering the case, and those action items show that the meeting was primarily to discuss Planned Parenthood’s political agenda in the state of California, but included within their political agenda were the issues involved in Kamala Harris’s investigation of me,” he continued.

Daleiden said Harris was engaging in her activities despite a conflict of interest. “She was running for United States Senate at that exact same time in March and April in 2016. She had petitions urging political support for Planned Parenthood on her campaign website.”

“It is a blatant use and abuse of law enforcement power solely to serve private partisan political interests, and that is why she is such a dangerous candidate,” Daleiden emphasized.