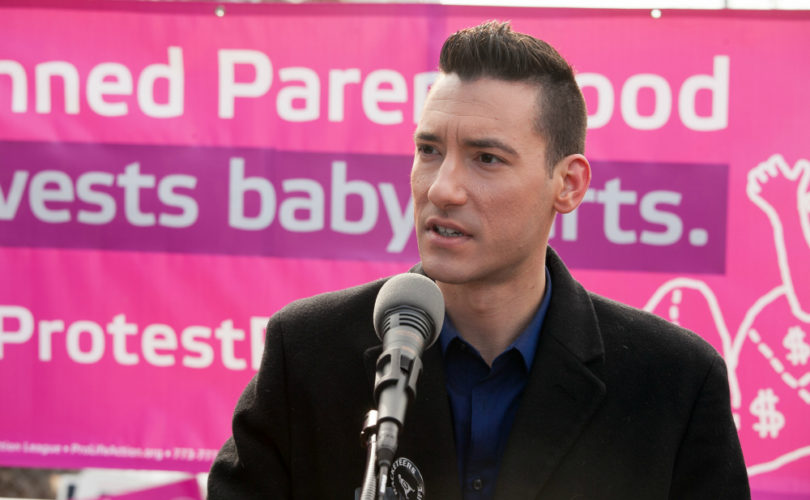 SAN FRANCISCO, California, September 17, 2019 (LifeSiteNews) — Pro-life journalist David Daleiden testified in court Monday that he limited his undercover investigations into the harvesting of body parts from aborted babies to what was legally permitted.

“I tried to keep recordings within the boundaries of California law as I understood it,” Daleiden said in response to a question by defense lawyer Horatio Mihet of Liberty Counsel, who is representing Daleiden’s co-defendant Sandra Merritt.

As a result, Daleiden said, it was “very likely” he did not gather as much information as he could in his sting operation that came to be known as the Human Capital Project.

Daleiden and Merritt of the Center for Medical Progress (CMP) are charged with 14 felony counts of recording confidential information without consent in connection with the undercover videos exposing Planned Parenthood’s trafficking in baby body parts. They face 10 years in prison if convicted. The preliminary hearing to determine if any of the felony counts can proceed to a trial is taking place in San Francisco's Superior Court with Judge Christopher Hite presiding.

Defense is arguing that the law does not consider confidential any communication that can reasonably be expected to be overheard.

They are also arguing Section 633.5 exculpates the surreptitious taping of confidential information when those doing so believe they are gathering evidence of violent crimes.

Daleiden testified that he kept recordings to public spaces, where the conversations could be overheard, such as restaurants and lobbies.

He also defended his undercover work on cross-examination by Deputy Attorney General Johnette Jauron, who asked him if his tactics involved “lying.”

“Lying means different things to different people,” Daleiden said, adding that he saw undercover work as a “distinct species of a moral act.”

“I knew I could do a more accurate and insightful investigation if I used an ‘undercover’ pretext,” he added.

Daleiden said the lawyers he consulted from the Thomas More Society, Alliance Defending Freedom, and the Life Legal Defense Foundation told him “nothing in California prohibited recording a nonconfidential communication.”

When Jauron said these lawyers must have told him “abortion is not homicide in California,” Daleiden said that he “never described legal induced abortion as homicide.”

“I was referring to fetuses being born alive. I was asking about the infanticide aspect,” he said.

In more than two days on the witness stand that ended Tuesday morning, Daleiden testified about the 30-month undercover investigation known as the Human Capital Project.

He testified that the information he gathered led him to believe aborted babies were born alive and left to die, or they were born alive and then killed by organ harvesting procedures. He also said that information he gathered indicated that abortionists were changing the abortion procedure without the woman’s consent and committing partial-birth abortions in order to harvest intact baby heads.

He told the court Monday that he spoke to Doe 6 — the names of those who are alleging they were illegally taped are sealed by judge’s order — at the National Abortion Federation (NAF) in April 2014 while posing as “Robert Sarkis” of the fictitious fetal tissue procurement company Biomax.

The medical director of the NAF, Doe 6 was pushing “novel cervical dilation techniques” that would allow a second-trimester abortion to take place in one day, but that “very experienced NAF abortion providers” questioned the safety of the technique because it would result in rapid delivery and increase the chances of babies born alive.

Daleiden also spoke to Doe 9, then medical director for Planned Parenthood Federation of America, at the NAF conference where she told him she would convert the baby to breech in order to harvest an intact calvarium, or head, which led him to believe she was committing partial-birth abortion.

“Sometimes she’ll tell me she wants brain, so we’ll leave the calvarium until last…keep it separate so it won’t get lost,” the woman said in the video.

In her testimony last week, Doe 9 denied ever changing the position of the baby to breach in order to harvest organs.

Daleiden testified that because of his conversation with Doe 9 at the NAF conference, he and Merritt followed up with a lunch meeting with her.

Center for Medical Progress videos reveal that Doe 9 talked during that lunch about having a huddle in the morning to discuss what fetal parts were needed, and how she would crush the baby in utero in such a way as to leave organs intact.

In a subsequent meeting with Doe 9 in Miami, she introduced Daleiden to Doe 10, the longtime director of Planned Parenthood Los Angeles, who trained Doe 9, and who, along with Doe 9,  sold aborted baby body parts to Novogenix.

Doe 10 told him she wanted “$75 per specimen,” Daleiden told the court. “She may have said something about a Lamborghini as well.”

He also talked to Dr. Leslie Drummond-Hay at NAF, who told him in a clip played in court that she once got a request for “four intact limbs…that was weird.”

Drummond-Hay told him that Planned Parenthood Mar Monte’s use of misoprostol would “get a lot of intact tissue for StemExpress,” Daleiden told the court.

He said he secretly recorded Dr. Savita Ginde, vice president of medical services at Planned Parenthood Rocky Mountain, before he recorded the May 2015 lunch meeting with Doe 12, 13 and 14 of StemExpress.

In a video clip played in court, Ginde said that intact births were “less than 10 percent” of abortions done at that location. Daleiden testified this information fuelled his investigation, calling 10 percent “a substantial number” given “the yearly volume at an affiliate that size.”