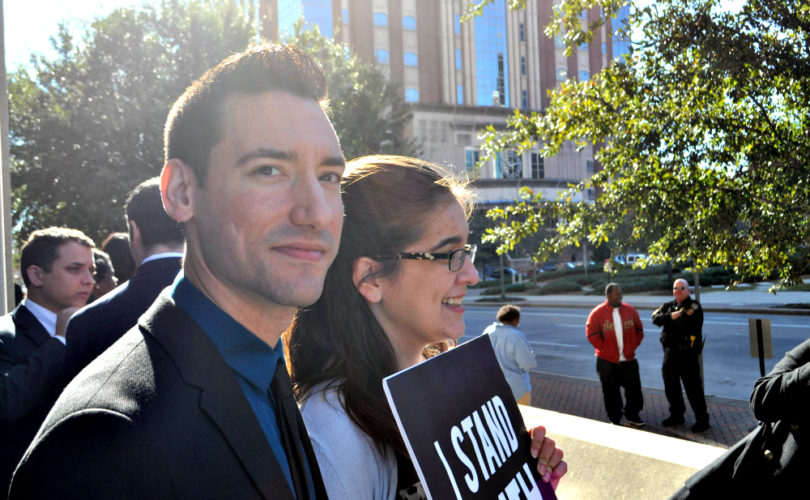 “The only thing we're going to accept right now is an apology,” said Terry Yates, one of four attorneys who flanked Daleiden down the corridors of the courthouse as he visited two court rooms to face felony and misdemeanor charges.

He confirmed an offer had been made but was unlikely to be accepted.

Instead, Yates said that a hearing before Judge Brock Thomas of Texas District 338 had been scheduled for March 28. “At that time, we anticipate filing a couple of motions” asking that all charges be dismissed at once. “We believe the indictments are factually and legally insufficient.”

“The old Texas expression 'all hat and no cattle' – that's what we believe these indictments are. There's not much to them,” he said.

Peter Breen of the Thomas More Society reiterated that stance during a press conference co-hosted by LifeSiteNews at 11 a.m. local time.

When asked if Daleiden would plead guilty to lesser charges offered by Harris County District Attorney Devon Anderson, Breen replied, “At this point, no.”

“What we really want is an apology,” Breen said, standing next to fellow counsel Briscoe Cain, Texas attorney for Operation Rescue. “He deserves an apology…He is innocent.”

His legal team felt certain he would prevail on the substance of the charges without admitting guilt to any of them.

“The reality is David is a modern day hero,” Jared Woodfill, another Daleiden attorney, told LifeSiteNews inside the courthouse. “He has exposed the wrongdoing that has been occurring at abortion clinics all across this country. And the fact that he's here today is a miscarriage of justice.”

“He will be vindicated,” he said.

“I'm very grateful for all the support from the public, especially from the people of Houston,” he said, some of whom held handmade signs that said “I Stand with Sandra and David” as he presented himself for booking and paid bail this morning.

Attorneys did not disclose the terms of the agreement prosecutors had offered. If convicted, Daleiden and fellow pro-life investigative journalist Sandra Merritt face up to 20 years in prison and a $10,000 fine.

However, the charges could be dismissed at any time. LifeSiteNews delivered the first batch of signatures, more than 106,000, on its petition to the DA's office asking that all charges against Daleiden be dropped at once.

If that fails? “We're ready to go to trial,” Woodfill told LifeSiteNews.