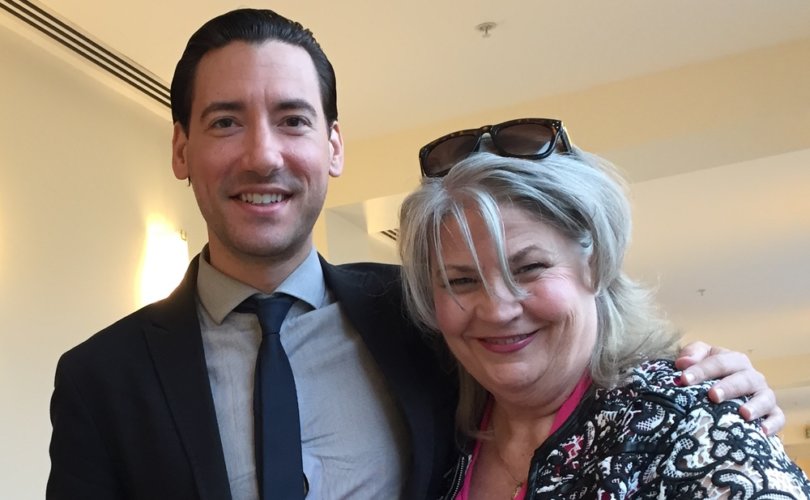 SAN FRANCISCO, California, September 20, 2019 (LifeSiteNews) – Pro-life undercover journalists David Daleiden and Sandra Merritt are hopeful that sworn testimony over the past weeks in San Francisco’s Superior Court demonstrates that those who trafficked aborted-baby body parts are guilty of crimes, not the whistleblowers who exposed it.

“We think the charges should be thrown out,” Daleiden told LifeSiteNews.

The “really shocking and troubling and clarifying truth that was exposed in the courtroom for the past two weeks here” is that “it’s very, very clear that the only crimes that were committed in the course of the undercover videotaping that Center for Medical Progress did were the crimes committed by the Planned Parenthood abortion doctors, and by the StemExpress body parts harvesters who were forced to testify under oath these past two weeks,” he said.

The criminal preliminary hearing for Daleiden and Merritt ended Wednesday after stretching into three weeks. Judge Christopher Hite’s ruling on whether the case will proceed to trial is expected within a month.

Daleiden, project lead for the Center for Medical Progress (CMP), and Merritt, an undercover reporter with CMP, are charged with 14 felony counts of recording confidential conversations without consent in connection with CMP’s undercover videos released in 2015 exposing Planned Parenthood trafficking in baby body parts. They face up to 10 years in jail if convicted.

Public outrage over the videos prompted congressional hearings and calls for the federal defunding of Planned Parenthood.

The preliminary hearing ran nine-and-a-half days between September 3 to 18, and Judge Hite will decide based on evidence if there is probable cause to continue to trial.

Daleiden and Merritt are claiming a Section 633.5 defense that allows covert recording of confidential communications when done to collect evidence of violent crimes.

Defense is also arguing that the law does not consider confidential any conversation that can reasonably be expected to be overheard.

The hearing saw high-level Planned Parenthood abortionists along with the CEO of baby parts harvesting company StemExpress dodging questions on their gruesome business under cross-examination by pro-life defense lawyers.

It was the venue for Daleiden’s first-ever public testimony about why he embarked on a 30-month undercover sting operation into Planned Parenthood trafficking in aborted baby parts and how he penetrated the networks of those involved in the grisly and illegal business.

It included a cross-examination of investigating agent for the Department of Justice Brian Cardwell that showed he did next to nothing to find out if those accusing Daleiden and Merritt of illegally taping them were telling the truth or understood “confidentiality” as defined in the law.

It featured defense testimony by one of the United States’ longest-practicing abortionists Dr. Forrest Smith. He testified that it is almost certain that some of the abortionists featured in the undercover videos deliberately altered abortion procedures in a way that both led to the birth of living babies with beating hearts and put women at risk. The goal in such abortions would be to obtain fresher, more intact organs.

In one dramatic moment, the attorney general unsuccessfully seeking a gag order on defense attorneys that cited a LifeSite news article after the CEO of StemExpress filed a complaint with Cardwell following her testimony that she feared for her security. In another, the defense accused the attorney general of trying to intimidate their star witness Dr. Theresa Deisher by suggesting she might be a target of criminal prosecution for allegedly being a co-conspirator in Daleiden'a undercover operation, which Deisher in subsequent testimony said she knew nothing about.

The hearing ended Wednesday with the riveting testimony of stem cell expert Dr. Deisher that human hearts used in research must be harvested from living babies. Daleiden testified earlier in the hearing he discovered a Stanford study using human fetal hearts supplied by StemExpress.

“The expert testimony from brilliant scientists like Dr. Deisher just goes to show why the whole reason why I and my colleagues like Sandra Merritt and others did our undercover work with the Center for Medical Progress,” Daleiden told LifeSiteNews.

Harris 'prostituted' herself to Planned Parenthood

The defense also tried to have the search warrant that led to the criminal prosecution quashed, arguing that seizing Daleiden’s unpublished source material was unconstitutional and the prosecution politically motivated. Judge Hite denied the motion.

The political nature of the case is no secret, and testimony and evidence presented at the preliminary hearing exposed “this completely bogus, sham, politically motivated case” for the “farce that it is,” Daleiden told LifeSite.

Documents from the case now on public record show former Attorney General Kamala Harris “had an in-person meeting at the attorney general’s meeting in Los Angeles with no less than six top-level Planned Parenthood of California executives,” he said. Daleiden added that the meeting took place a couple of weeks before Harris ordered Department of Justice agents to raid his Orange County apartment in April 2016 and seize all his recording materials, including unpublished source documents of his undercover investigation.

“We have the minutes in an email from the meeting that Kamala had with the Planned Parenthood leadership, and in that meeting they discussed both Planned Parenthood’s political agenda in the state of California, and they also discussed the attorney general’s investigation of me and of CMP,” Daleiden said.

There were two Planned Parenthood witnesses in Harris’s investigation into CMP present for both discussions, he said.

“So there was no separation whatsoever between what Kamala Harris was doing as a politician for her backers at Planned Parenthood, and what she was doing as the top law enforcement officer in the state of California,” he told LifeSiteNews.

“She was prostituting her law enforcement powers to the service of her political backers at Planned Parenthood, and that’s very corrupt, and very bad, and very wrong, and that should never happen to any person in the United States of America,” Daleiden said.

Russo “was the one who was in charge of supplying body parts to the criminal Da Vinci companies who have since been shut down,” he said.

“So you can imagine the sort of interest that Dr. Russo and Planned Parenthood of Orange county had at that time to try and create an alternative fake prosecution against me and against CMP.”

Up next: Planned Parenthood lawsuit against CMP et al

Daleiden is now preparing for the month-and-a-half trial in the Planned Parenthood civil suit against him, CMP, and CMP undercover reporters that begins October 2.

“We will be facing down against, I think 10 or 11 different Planned Parenthood affiliates in San Francisco federal court in Judge [William] Orrick’s courtroom,” he said.

Judge Orrick “was the founder and funder of a Planned Parenthood Northern California clinic here in San Francisco,” which is also “one of the plaintiffs in this case, Daleiden said.

Another plaintiff in the lawsuit is Planned Parenthood Orange County “who had been selling late-term baby body parts” to the Da Vinci companies “for years and years and years,” he told LifeSiteNews.

As a direct result of the evidence collected in the CMP undercover investigation, the Da Vinci companies were shut down by the Orange County district attorney and “liquidated in a $7.8 million settlement” in which they “admitted guilt for selling baby body parts against the law,” Daleiden said.

A number of Planned Parenthood abortionists who testified at the criminal preliminary hearing will be doing so in the civil case, he said.

“If the past two weeks here at the prelim are any indication, the Planned Parenthood witnesses are not ready for primetime,” Daleiden told LifeSiteNews.

“They’re not credible, they’re not honest, they’re not ethical, and the things that they’ve been doing are not legal, call them anything you want, and they’re not pretty.”

He believes that Planned Parenthood will ultimately face justice.

“I don’t think that the Da Vinci companies are going to be the last company like that, who are going to face justice under the law in that way,” Daleiden said, adding that there were many criminal referrals sent out from the congressional investigations of Planned Parenthood.

“So we’re still waiting to get an update from the Department of Justice and the FBI about where that stands with Planned Parenthood,” he said.

“I think we should all stay tuned.”