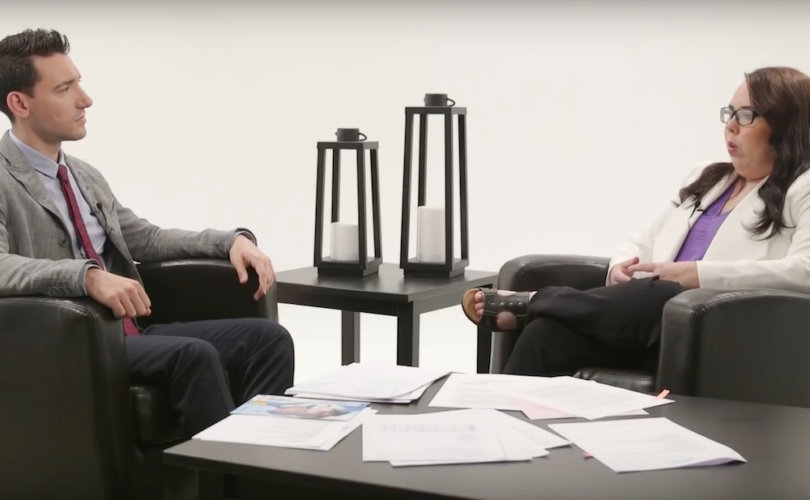 Center for Medical Progress (CMP) undercover journalists Daleiden and Sandra Merritt are charged with 14 felony counts of illegal taping in connection with the videos CMP released in 2015 exposing Planned Parenthood trafficking in aborted baby body parts. One of the original 15 counts was dropped on Friday. They face 10 years in prison if convicted.

In further research he found a 2012 Stanford University study that used human fetal hearts in a Langendorff apparatus, which he was told by experts required a living, beating heart and which cited StemExpress as supplying those hearts.

Daleiden testified he used the Facebook filter Graph Search to locate StemExpress employees in his area, and it came up with a list of about 12 people.

One of them was Holly O’Donnell.

He sent O’Donnell a Facebook message, and in October 2013, they had a two-hour phone conversation about her former work as a StemExpress fetal tissue procurement technician, Daleiden told the court.

His defense lawyers played a video clip of O’Donnell talking about these experiences, but Judge Christopher Hite ruled it inadmissible after Daleiden testified it was a CMP production.

Daleiden then testified to what O’Donnell said in the clip.

“In an October 2013 conversation, Holly O’Donnell told me about a 25-week almost completely intact fetus that she procured at Planned Parenthood Alameda,” he said.

Alameda is one of Planned Parenthood Mar Monte’s 30 locations.

O’Donnell described that the baby’s “chest cavity was open” and when her supervisor Jessica Cruz began “tapping on the heart,” then “the heart began beating again for about 30 to 50 seconds,” he said.

Cruz then “had her cut through the face of that fetus to harvest the brain,” Daleiden told the court.

Daleiden testified that O’Donnell told him she saw other aborted intact babies who were cut open “when the heart was still beating.”

In another video clip O’Donnell describes checking her laptop on her day off and seeing a message from co-workers that “the doctor had aborted a fully intact fetus, fully intact, and StemExpress was sending it straight to the lab.”

Hite ruled the clip inadmissible because it “appears to be doctored.”

Daleiden then testified O’Donnell told him about another “fully intact fetus” procured by StemExpress from Planned Parenthood Mar Monte.

He said O’Donnell’s revelations in 2013, and his knowledge that StemExpress supplied hearts for the Stanford study using the Langendorff apparatus, “caused me to suspect StemExpress and Planned Parenthood Mar Monte of homicide.”

He said he found evidence of StemExpress importuning doctors in an email O’Donnell gave him in which StemExpress procurement technicians Sarah Heuston and Jessica Cruz discuss procuring fetal organs for Stanford, saying: “We should do this with Dr. B.”

He said O’Donnell told him that StemExpress technicians working in the various Planned Parenthood Mar Monte locations, such as Fresno, Sacramento, and San Jose, would coordinate using AOL-instant messenger about “what they were able to harvest compared to the task sheet.”

Daleiden testified the Planned Parenthood Mar Monte consent form O’Donnell gave him led him to believe patients were told the abortion procedure would not be changed if they agreed to donate fetal tissue.

He testified that the amount of money StemExpress paid for baby body parts caused him to suspect abortionists would change the procedure to harvest more intact organs.

Daleiden’s lawyer Brentford Ferreira, and Merritt’s lawyer, Horatio Mihet of Liberty Counsel, fought hard to have clips of the video Daleiden made with O’Donnell played in court as evidence of their clients’ “state of mind” – the belief they were investigating violent crimes.

CMP made the video of O’Donnell in 2014, before Daleiden and Merritt secretly recorded Doe 12, CEO of StemExpress; Doe 13, former VP of corporate development at StemExpress; and Doe 14, procurement manager at StemExpress at a May 2015 lunch.

Deputy Attorney General Johnette Jauron repeatedly objected the clips were hearsay, and Hite questioned whether O’Donnell, who was a phlebotomist, was a fetal tissue procurement technician.

Ferreira introduced a number of documents O’Donnell gave to Daleiden as evidence that she procured fetal tissue for StemExpress.

These included StemExpress procurement logs listing the fetal organs harvested from Planned Parenthood Mar Monte and researchers they were shipped to, and a March 20, 2013 emailed “updated task procurement schedule” from Bob Reboin of StemEpress to O’Donnell.

After the clip played, Hite ruled it was inadmissible because CMP produced it.

In the clip, O’Donnell describes the baby whose heart began beating when Cruz tapped it. “It had a face, it wasn’t completely torn up, its nose was very pronounced, it had eyelids.”

Cruz said, “This is a really good fetus and it looks like we can procure a lot from it. We’re going to procure brain.”

When Cruz told her to cut through the face of the baby with scissors to harvest the brain, “I’m thinking no, I don’t want to do this…I can’t even describe what that feels like,” O’Donnell says.

She would think about what the aborted babies would have been like, and the lives they might have had, she adds.

“I feel like it’s a waste of life and it’s sad that so many people view it as a mistake, because it’s not. Life isn’t a mistake. Getting pregnant can be an accident, but it’s not a mistake.”

Daleiden told the court he kept in contact with O’Donnell until her death.

The clip of O’Donnell played in court is included the above CMP Human Capital Project video.