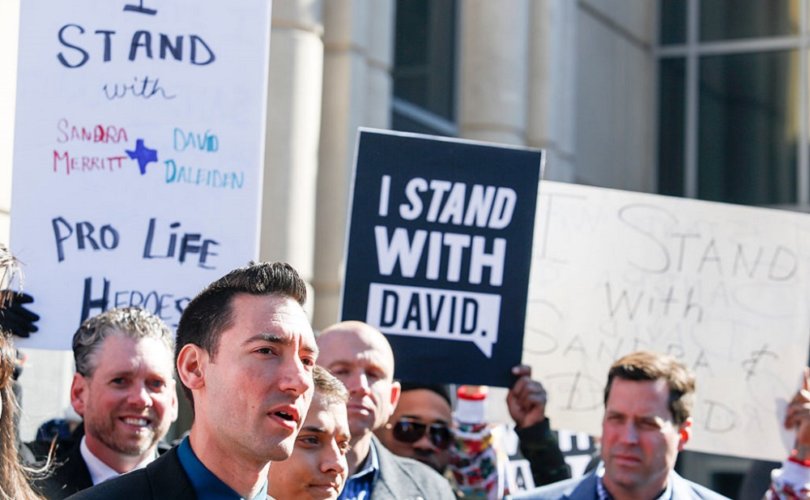 SAN FRANCISCO, July 14, 2020 (LifeSiteNews) – Five years ago, on July 14, 2015, David Daleiden released the first of many incriminating videos that showed the world the gruesome underbelly of illegal practices by the abortion industry. The Thomas More Society would soon thereafter begin its defense of undercover journalist Daleiden.

As researchers and reporters for the Human Capital Project of the Center for Medical Progress, Daleiden and his investigative partner, Sandra Merritt, posed as human tissue buyers. What they uncovered shocked the country as the videos they recorded revealed Planned Parenthood’s involvement in aborted baby body parts trafficking.

The videos, 13 in all, caused a national outcry to #DefundPlannedParenthood and triggered a congressional investigation of the abortion industry. Within days of the first video release, David and Sandra were hauled into court by the National Abortion Federation.

The battle of David versus the “Goliath” abortion industry eventually evolved into seven separate court cases both criminal and civil — in four different states.

On the fifth anniversary of the video release, the Thomas More Society’s Tom Brejcha, President and Chief Counsel, and Peter Breen, Vice President and Senior Counsel, shared their perspectives on the challenges and victories of the last five years.

“There are many disturbing revelations that have occurred during the abortion industry’s aggressive pursuit of David Daleiden,” stated Brejcha. “Even if you take the heinous butchering of born-alive babies out of the equation — yes, that came out in court — you still have broader implications for a free society.”

Breen, lead counsel for the Thomas More Society Daleiden defense team, noted that many abortion proponents claim to be “pro-woman.” “Yet,” Breen observed, “David Daleiden is being attacked by the abortion industry for exposing their disregard for human life, the disrespect they have demonstrated for women, and the deliberate risk to women’s health they incur in order to reap huge profits. Not only is that a betrayal of women’s rights, but the legal actions against David Daleiden pose an even deeper threat to the freedoms of every American.”

Brejcha elaborated on Breen’s comment, “If journalists can be prosecuted and charged as criminals for undercover reporting, what will that do to the exposés that hold businesses and politicians accountable? If reporters are no longer able to freely investigate potential wrongdoing, the American public will be robbed of important facts that would otherwise remain hidden. The disturbingly aggressive prosecution of David Daleiden is an overreach that reeks of tyranny and oppression.”

Breen shares Brejcha’s concern about this “muzzling of the media” and the punishment of whistleblowers.

“The legal theories that Planned Parenthood employed in the case against David Daleiden could be used by any entity or politician or person against a reporter who was exposing wrongdoing, whether it be corrupt politicians, whether it is those who are abusing animals — anything,” Breen warns. “They can use these same legal theories against undercover journalists.”

Daleiden has been charged with a broad range of both felonies and misdemeanors. These include two Texas cases that revolved around the use of false identification and violating Texas law banning the sale of human organs, which was dismissed, and three civil lawsuits, one filed by Planned Parenthood, one filed by the National Abortion Federation, and a class action brought by anonymous abortion industry workers.

“All of these accusations are targeted against David’s use of standard tactics of investigative reporting,” shared Breen. “David videotaped meetings in public places with abortion industry professionals who spoke openly about their practices and even joked about the atrocities they earned big money to commit.” He continued, “David is being charged as a criminal for using the same investigative reporting techniques regularly exercised by other journalists. These industry practices are often lauded and rewarded, but in California, Mr. Daleiden is being charged as a criminal and threatened with years in the penitentiary for shining his investigative spotlight on the dark, otherwise hidden, secrets of the abortion industry.”

As part of his ongoing investigation, Daleiden sought records involving fetal tissue acquisition and testing from the University of Washington and the University of Minnesota, where he uncovered evidence of the illegal use of taxpayer money in these pursuits. Most recently, Daleiden has launched a counterattack, suing Planned Parenthood and Kamala Harris, former California Attorney General and one-time Presidential candidate, for conspiring to violate his civil rights by means of a criminal prosecution brought and pursued in bad faith.

Thomas More Society Executive Vice President and General Counsel Andrew Bath confirmed the legal group’s commitment, stating, “We are unwavering in our defense of David Daleiden. We firmly believe that he is completely innocent and will go down in the annals of American history as a heroic whistleblower, muckraker, and investigator, held in the highest traditions of citizen journalism.”

Daleiden was arraigned in February 2020 on nine of the felony counts by Attorney General Xavier Becerra. Becerra, and his predecessor, Harris, are each closely allied with, and supported by, Planned Parenthood. A belatedly added tenth count is being challenged, as barred by the statute of limitations.

Some of the shocking revelations that came out during the September 2019 preliminary hearing before Judge Christopher Hite in People of the State of California v. David Robert Daleiden and Sandra Susan Merritt included:

Each of the above witnesses was allowed to testify without being named — despite the fact that they are the accusers in the prosecution by which the State of California is trying to jail Daleiden.

“This fight over David’s First Amendment Rights — and the people’s right to know what the abortion industry is desperately trying to keep hidden — is far from over,” stated Brejcha with confidence and resolve. “The United States Constitution, its Amendments and the Bill of Rights are precious,” he remarked, “and worth much more than the millions of dollars that the abortion industry has spent over the last five years in the effort to silence truth and leave the American citizenry ignorant of these horrific crimes they want to keep hidden at all costs.”