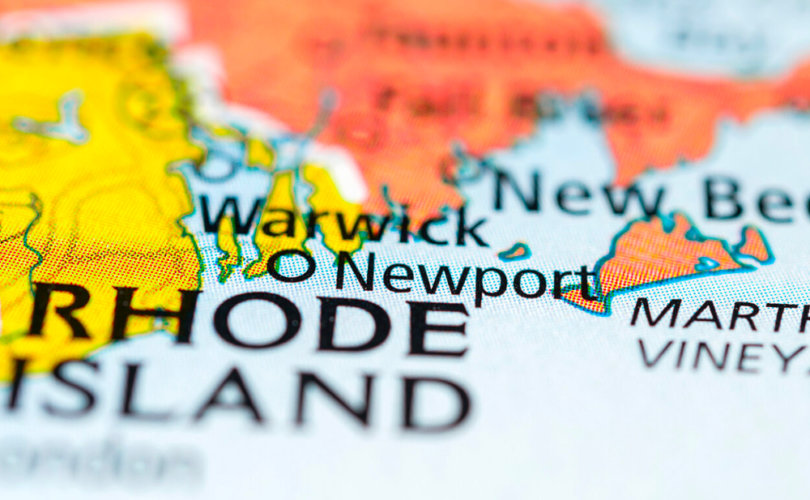 (Children’s Health Defense) – Rhode Islanders over age 16 who don’t get the COVID-19 vaccine could face $50 monthly fines and have to pay twice as much state income tax under legislation introduced in the state Senate.

Senator Samuel W. Bell (D-Providence) said he proposed the bill (S 2552) because “ … we have a crisis with the pandemic.”

“Thousands of Rhode Islanders have died. I’ve had really painful calls from constituents who can’t go to the store because they’re immuno-compromised, who have lost loved ones to this pandemic, who are really ill and not fully recovered, suffering long-term effects.”

Bell said his 4-month-old son has interstitial lung disease, which places him at risk of serious illness or death if he gets a respiratory infection.

“My son’s condition has made me feel more compassionate and ready for the heavy level of abuse I knew I’d receive,” he said.

“I love my son more than I can put into words, and the idea of him not being able to interact with people and to go to school — those things terrify me. And I’m not the only parent of a child with a serious immune condition,” Bell added.

Bell’s assumption that people who are vaccinated can’t infect the immunocompromised is not supported by research, especially in the case of Omicron, said Brian Hooker, Ph.D., chief scientific officer of Children’s Health Defense.

“Senator Bell’s passion is severely misplaced and appears to be based on a huge amount of misinformation regarding the COVID-19 vaccine. The science clearly shows that the vaccine does not prevent transmission and could do more harm than good considering the more than 1 million reports of vaccine injury in the (Centers for Disease Control and Prevention) Vaccine Adverse Event Reporting System database.”

The legislation provides for no religious exemption and the state’s health department would consider a medical exemption only if three physicians signed off on it.

The proposed law also requires employers to collect additional state income taxes from those who violate the mandate. The law does not specify how employers would accomplish this, but does make them subject to hefty fines for noncompliance.

According to the bill:

“Any employer found to be knowingly in violation of this section for more than seven (7) days shall be required to pay a monthly civil penalty of five thousand dollars ($5,000) for every violation.”

According to WJAR, a Providence media outlet, two senators removed their names from the bill after reporters from the station “stopped by a local grocery store to speak with people about the matter.”

“Some of the senators who introduced the bill on March 1 did not want to talk about it anymore. The issue blew up on Tara Granahan’s WPRO radio show Tuesday morning.”

As reported by the Globe, de la Cruz wrote an email to supporters on Tuesday saying people across the state have been asking her about Bell’s bill.

“I have not, nor will I ever support, legislation that coerces Rhode Islanders into making medical decisions or face steep financial damages,” she wrote.

“I hear my constituents and others around the state loud and clear — this is dangerous legislation and sends the message that our government doesn’t trust you to make the right choice for you and your family. This is an unconscionable overreach of legislative powers.”

As I was quoted in the article, “it’s amazing that a state senator from Rhode Island, a state that was founded on personal and religious liberty, would impose a special tax on people for exercising their religious or conscientious beliefs.”https://t.co/hKKxdOZYG2

“That said, I’m not taking it for granted, and neither should you,” she wrote in her email.

Rhode Island ranks No. 6 in the country for residents supporting a universal COVID vaccine mandate, according to a new survey. reported in the Boston Globe.

The poll from the COVID-19 Consortium for Understanding the Public’s Policy Preferences Across States found 64% of Rhode Island residents said they believe everyone should be required to get the vaccine, behind only Washington, D.C. (75.6%), Massachusetts (67.3%), Hawaii (66.7%), Maryland (65.2%) and California (65%).

Nationally, 55.3% of Americans support a vaccine mandate, according to the survey.