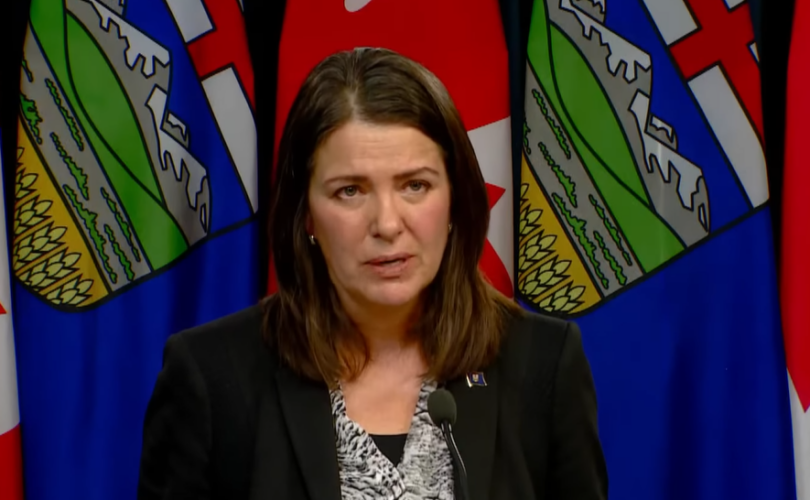 (LifeSiteNews) – Alberta premier Danielle Smith took a direct shot at the World Economic Forum (WEF) meeting taking place in Davos this week, saying that she wants nothing to do with a group that is out to destroy her province’s economy.

“We have to wonder if there’s if there’s an appetite in the public for me as a politician to be spending time in a paid access venue where the leaders brag about how much control they have over politicians,” said Smith yesterday while being interviewed on the Shaun Newman podcast.

“I don’t see any value in going to that. I’m focused right here in Alberta.”

Newman asked Smith to give her take on the WEF’s Davos meeting during a portion of the interview, and the premier distanced herself from people who want to eliminate the oil and gas industry on which Alberta’s economy depends.

Smith declared that she will neither “stand for” nor “rub shoulders with people who share that aspiration.”

“We’re going to make sure that our oil and natural gas industry stays strong,” she said to Newman.

Smith revealed that she is paying close attention to what is going in Davos through independent media sites like True North because she thinks “that [the WEF] unfortunately have an aspiration for our economy to shut down our energy industry.”

The reduction and eventual elimination of the use of so-called “fossil-fuels” in favor of a transition to less reliable “green” energy has been pushed by the WEF.

— Article continues below Petition —
Stand with Josh Alexander against school that allows boys to use girls' bathrooms
Show Petition Text
5922 have signed the petition.
Let's get to 6000!
Thank you for signing this petition!
Add your signature:
Show Petition Text

Alberta has the largest oil and gas reserves in Canada. According to the provincial government, “Alberta’s oil sands has the fourth-largest oil reserves in the world, after Venezuela, Saudi Arabia and Iran.”

Meanwhile, Prime Minister Justin Trudeau government’s current environmental goals – which are in lockstep with the United Nations’ “2030 Agenda for Sustainable Development” – include phasing out coal-fired power plants, reducing fertilizer usage, and curbing natural gas use over the coming decades.

Trudeau’s “just transition” plan, along with the WEF’s climate goals of wanting to eliminate the oil and gas sector, noted Smith, means her province is under attack, and is something she won’t stand for.

“We’ve been hearing on all about the ‘just transition’ ever since we started the beginning of the year. And if you look at the report that came out from Blacklock’s Reporter, they’ve done a story today that confirms my worst fears …  They talk about how we need to transition oil and natural gas workers into jobs like janitors and driving trucks for solar companies,” Smith told Newman.

“This is the language that they’re using and the bureaucracy that doesn’t come from nowhere. That comes from a large concerted effort by a number of people who want to shut down our oil and natural gas industry.”

Since becoming premier, Smith has come out swinging in defense of the province’s oil and gas industry.

Just before Christmas, she took aim at Trudeau’s proposal to ban new sales of gas-powered cars after 2035. She promised to protect her province from mandates and any rules that attack its oil and gas industry.

“As premier, I will make sure you have a choice when it comes to the vehicle you drive — the NDP and Liberals can butt out,” she said.

Smith has promised that if needed, she would use the recently passed Alberta Sovereignty within a United Canada Act, known colloquially as the “Sovereignty Act,” to push back against “unconstitutional” federal government overreach.

Since becoming prime minister in 2015, Justin Trudeau has pushed a radical “climate change” agenda which has increased costs for many products, primarily due to his imposition of a punitive and ever-increasing “carbon tax” on gas and diesel.

Trudeau’s goals are not without criticism, with even one former Liberal MP blasting his efforts as “beyond farcical” and “irresponsible.”

Alberta in particular has a history of fighting the federal government when it comes to asserting its autonomy over its natural resources.