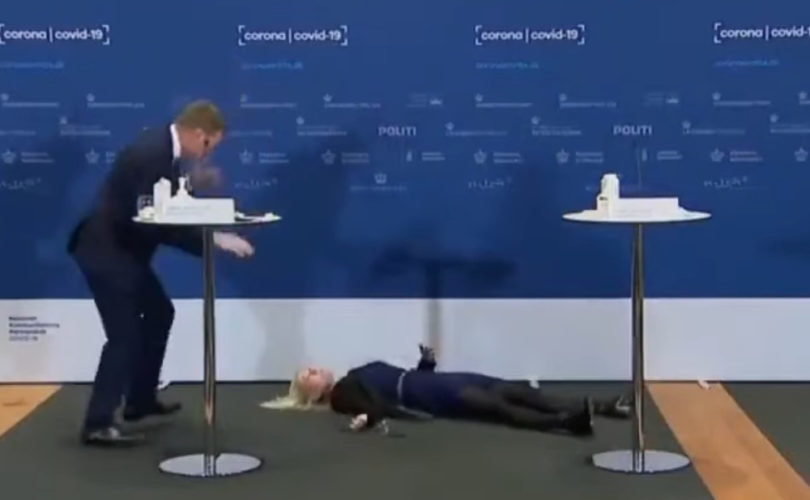 COPENHAGEN, Denmark, April 15, 2021 (LifeSiteNews) — The head of the Danish Medicines Agency fainted during a press conference announcing that Denmark has become the world’s first nation to permanently halt use of the British-made and abortion-tainted mRNA-derived Oxford/AstraZeneca vaccine.

Following headlines that implicate AstraZeneca’s COVID-19 vaccine in numerous cases of blood clots, some resulting in death, Tanja Erichsen of the Danish Medicines Agency (DMA) on Wednesday suddenly fainted in the midst of the announcement, crashing to the floor and spilling her glass of water.

She was taken to the hospital and has since recovered, according to a BBC report. The cause of her unexpected blackout is not yet publicly known. It is also unknown if she had received the COVID vaccine, at what point, and which one.

Denmark’s decision to permanently stop using AstraZeneca’s jab comes one month after the country suspended use thereof following a death related to a blood clot and amid a growing number of reports of blood clots arising shortly after inoculation with the vaccine within the European Union (EU).

Danish health authorities, the first in Europe to suspend the vaccine’s use for all citizens, had launched an investigation at the beginning of March into the relationship between blood clots and the AstraZeneca vaccine “[d]ue to the temporal association” brought to light by health reports.

The DMA released a statement at the time that confirmed Denmark’s intention, “based on a precautionary principle,” to “put vaccinations with the AstraZeneca vaccine on hold … pending the results of the investigations.”

Now that those investigations are concluded, Danish authorities have deemed the vaccine unfit for stopping the spread of COVID-19, and therefore decided to permanently remove AstraZeneca’s shot from their national vaccination scheme. Officials did not explicitly cite their reasons for the decision.

The director of Denmark’s Health Authority, Søren Brostrøm, did explain that the results of their investigations demonstrated “real and serious” side effects from the AstraZeneca vaccine. “Based on an overall consideration,” he added, “we have therefore chosen to continue the vaccination programme for all target groups without this vaccine.”

A spokesperson for AstraZeneca, commenting on Denmark’s decision to cancel use of its jab, said the pharmaceutical manufacturer respects “the decision taken by Sundhedsstyrelsen [the National Board of Health] in Denmark. Implementation and rollout of the vaccine programme is a matter for each country to decide, based on local conditions.”

Danish authorities have also suspended use of the American-developed Johnson & Johnson vaccine, given the company’s recent withdrawal from the EU market over blood clotting concerns. The American firm also had its vaccine rollout put on hold in the U.S. on Tuesday after concerns were raised by both the Centers for Disease Control and Prevention (CDC) and the Food and Drug Administration (FDA), relating to six “cases of a rare and severe type of blood clot.”

“All six cases occurred among women between the ages of 18 and 48, and symptoms occurred 6 to 13 days after vaccination,” the joint statement reads, adding they are “recommending a pause in the use of this vaccine,” purportedly out of “an abundance of caution.”

Since Denmark’s original suspension of the AstraZeneca jab in March, a slew of European countries put their national rollouts on hold. Germany reined in delivery of the shot twice, the first time in late February for those under 65 years of age, and again at the end of March for those under 60.

Openly homosexual German Health Minister Jens Spahn announced on March 30 that there would be an age restriction on delivery of the vaccine following revelations from Germany’s vaccine regulator that 31 cases of a rare blot clot had been recorded, causing nine deaths in the country. The majority of cases were in women under 65.

Shortly after this date, French officials put a pause on the AstraZeneca rollout due to links between the shot and life-threatening thromboses.

Austria, Estonia, Latvia, Lithuania, and Luxembourg all suspended the use of a suspect batch of the Oxford/AstraZeneca vaccine, citing blood clot concerns.

The poor reputation of AstraZeneca’s vaccine has reached North America, too. Health Canada halted distribution of the vaccine for those under 55 following similar reports of dangerous blood clots forming after taking the jab.

In a joint statement from Canada’s provincial medical offices as well as the national Chief Public Health Officer, an announcement was made that “[a]s Chief Medical Officers of Health, we are acting decisively with our unified position to pause the use of AstraZeneca vaccine in Canada in those under age 55 at this time.”

“We are taking this precautionary measure while Health Canada as the regulator completes its updated risk/benefit analysis based on emerging data,” they said.

The U.S. has never granted an emergency use authorization for this particular vaccine.