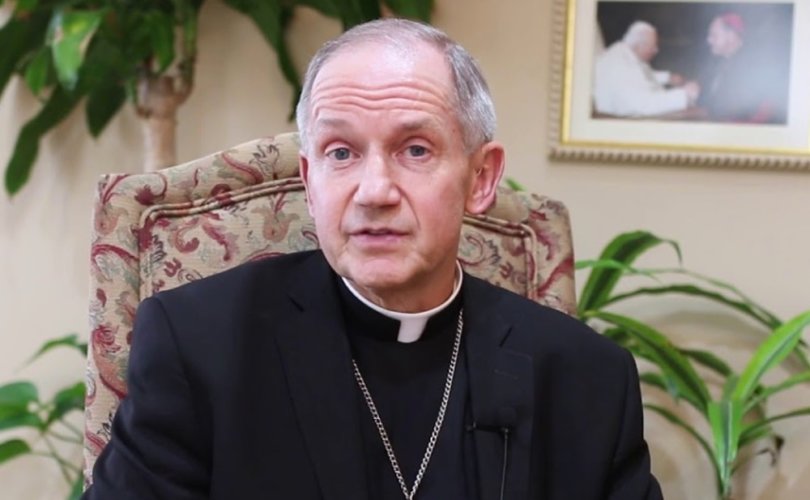 ILLINOIS, (LifeSiteNews) –Today, an Illinois Catholic bishop known for his orthodoxy soundly condemned his state’s enactment of a law which now allows minors to abort their children without notifying their parents.

Bishop Thomas John Paprocki of the Diocese of Springfield in Illinois said Governor JB  Pritzker’s signing of HB 370, which repeals the Parental Notification Act, “marks a dark and disgraceful moment in the history of the State of Illinois.”

The now-repealed Parental Notification Act, passed in 1995, required doctors to give a pregnant minor’s adult family member at least 48 hours prior notice of the “intention to perform the abortion.”

In a statement issued today, Paprocki remarked that those who have “promoted and voted in support of” HB 370, “the deceptively titled Illinois Youth Health and Safety Act,” including Prtizker, “have granted a five-part victory to evil” in Illinois.

Paprocki decried first what he described as the law’s “free pass to sex traffickers,” allowing them to “more easily than ever before cover up their crimes with impunity.”

“Those in law enforcement and social service who fight so hard to combat this evil as well as those young women and girls who are enslaved by evil forces in this industry have been dealt a demoralizing blow by our government,” he added.

Paprocki also noted that the law “violates the most fundamental rights and duties entrusted by God to parents to ensure the health and safety of their children,” “which no government can take away.”

“In attempting to do so, this legislation acts directly against God’s will, which is the very definition of evil,” wrote Paprocki.

“Third, our government has imperiled the children whom God has entrusted to their governance,” he continued, pointing out that laws preventing children from making potentially life-altering decisions such as buying cigarettes or alcohol, or giving consent for their own vaccines, are designed to protect them.

By removing the requirement for parental notification of the irreversible, profoundly life-altering decision of having an abortion, “our government has knowingly put our children in mortal danger and physical danger,” Paprocki remarked.

“Fourth, and most grievous, our government has promoted and facilitated murder. Pope Francis has rightly called abortion murder and ‘hiring a hit man to solve a problem.’ This most heinous offense against God and neighbor is now made more easily accessible to minor children than tattoos or getting their ears pierced,” he continued.

“Fifth, the government has provided evil the cover of darkness in which it thrives. The devil desires darkness and despises the light. It is striking how much this legislation does to provide cover, secrecy, and darkness over evil deeds,” Paprocki went on. “But the Light will come and judge the deeds of men.”

Paprocki is calling for prayer “for a conversion of heart” of those who “perpetrated this evil,” as well as “for the protection of the many children and families imperiled by this unjust law.”

Women have been increasingly flocking to Illinois for abortion because of its lax laws, which allow females of any age to abort their children “for any reason, at any time, up until the moment a baby is delivered,” Bourne noted.

7,534 abortions of children of non-residents of Illinois were recorded in 2019, an almost 10% increase from the previous year, and exceeding the number of recorded abortions for the states of Wisconsin, Iowa, Missouri, and Kentucky for that year.