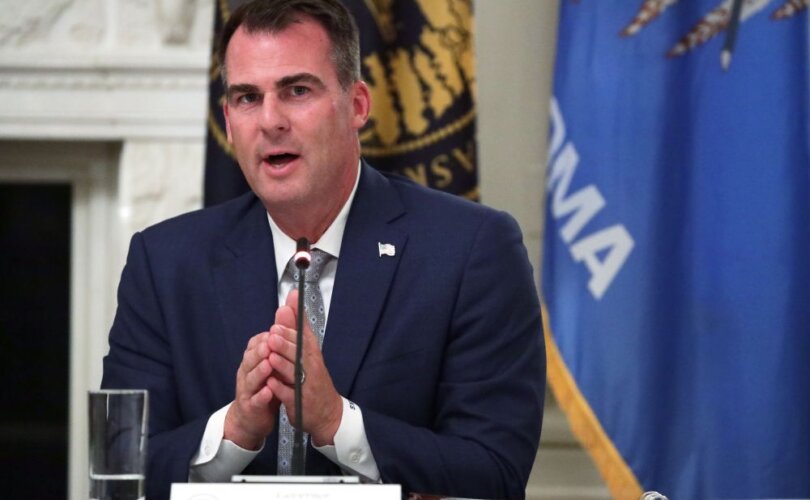 Governor Kevin Stitt (R-OK) speaks during a roundtable at the State Dining Room of the White House June 18, 2020 in Washington, DC. Photo by Alex Wong/Getty Images

(LifeSiteNews) — With the 2022 midterm elections at hand, the strongly pro-life, pro-family governor of Oklahoma faces danger of losing his re-election due to the apathy of Sooner state voters and a concerted effort by left-wing institutional powers to shift the deep-red Midwestern state blue, reports suggest.

According to a Monday report by The Federalist, Oklahoma Republican Gov. Kevin Stitt could be ousted by Democratic candidate Joy Hofmeister, who has been backed by influential school boards and funded by “dark money.”

Oklahoma Could Start Looking Like Oregon If Republicans Don’t Wake Up And Votehttps://t.co/tEoQKFdwLZ

“While Republican candidates in deep-blue states such as Oregon and New York appear to be taking the lead in gubernatorial races, recent polls show an uncomfortably tight race in Oklahoma,” The Federalist reported, citing polls suggesting that Hofmeister and Stitt are running neck-and-neck.

According to The Federalist, Hofmeister’s surprising popularity despite traditional red-leaning inclinations of Oklahoma voters can be traced to Hofmeister’s broad support from “Oklahoma school boards, district superintendents, and an endorsement by the National Education Association,” the state’s five largest tribes, as well as a general lack of motivation among voters to head to the polls.

However, Hofmeister’s biggest edge in the election reportedly comes from the millions of dollars in “dark money” that have been funneled into her campaign.

The Oklahoman explained that while political action committees are required to report which groups they receive donations from, “some groups are able to be set up as specific types of nonprofits that are shielded from revealing their donors, a practice that is often referred to as ‘dark money.’”

The outlet reported that Stitt “has been a target for millions of dollars in commercial buys” from “dark money” groups. While it’s unclear exactly how much money has been channeled into opposing Stitt in this way, his campaign has argued the number could be as high as $50 million.

#OkGov statement form @Stitt4Gov on The Oklahoma Project ad accusing him, without any proof, of using a helicopter to commute from Edmond to OKC. pic.twitter.com/g5izou0Y5m

Negative ads targeting Stitt include a commercial by an organization called Oklahoma Children Our Future. The ad claimed that the governor’s promotion of school choice and allocation of private school vouchers would destroy education in rural communities, a stance Hofmeister has espoused during her campaign, according to The Oklahoman.

RELATED: Oklahoma governor signs Texas-style abortion ban, vows to ‘do everything we can’ to defend life

Hofmeister has denied allegations that she knows who’s behind the “dark money” organizations opposed to her competitor.

In response to the wide-scale attack ads by dark-money-funded organizations, Stitt donated nearly a million dollars from his own money to help finance his re-election bid, The Federalist reported.

Shady political organizations and school board backing aren’t the only factors contributing to Stitt’s tightening race against Hofmeister.

According to The Federalist, low voter participation among complacent Republican constituents has also helped to narrow Stitt’s lead.

Noting that Oklahoma came in last for voter participation in the 2020 general election, the outlet also suggested that overall American voters have become disengaged in the electoral process thanks to lack of trust in electoral integrity combined with Oklahomans’ general complacency about continuing Republican leadership.

RELATED: ​​Will Democrats destroy America with these ultra-radical policies if they win the midterms?

The Federalist urged Oklahomans to overcome their apathy or concerns about electoral integrity and cast their ballots Tuesday to stave off a Democrat takeover.

Despite worries about Hofmeister’s nearness to Stitt in the polls, however, fivethirtyeight has projected that in 92 out of 100 scenarios Stitt is anticipated to seize victory.