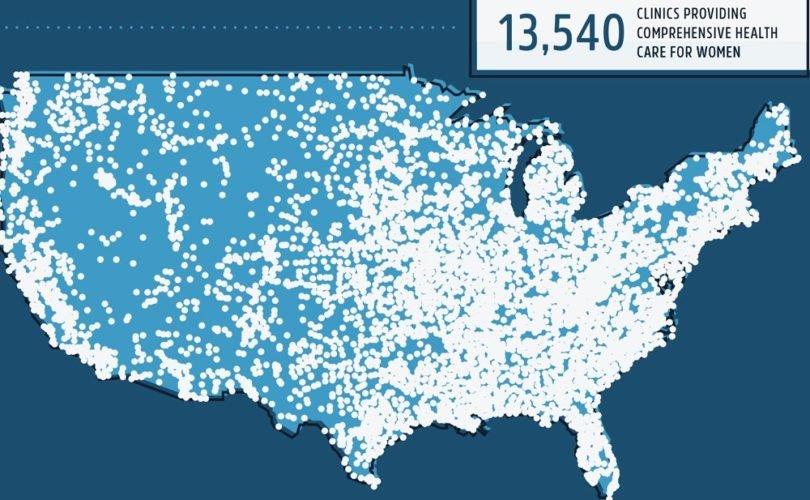 August 19, 2015 (LifeSiteNews) — A new graphic showing an outline of the United States saturated with tens of thousands of dots is providing a clear visual dispute of the oft-repeated claim that removing Planned Parenthood's funding would result in a health care crisis for women.

The graphic, produced by Alliance Defending Freedom and Susan B. Anthony List's Charlotte Lozier Institute, is a U.S. map identifying tens of thousands of existing health care clinics that can fill whatever need would arise should the nation's largest abortion provider suddenly cease offering its services.

The graphic is in answer to the claim that defunding Planned Parenthood, which receives hundreds of millions of taxpayer dollars annually, would leave women without critical health care.

A second graphic shows the same U.S. outline, with a sparse number of dots representing the nation's Planned Parenthood locations reported to be offering services for women.

One of the services claimed by Planned Parenthood and its advocates to be critical and provided by the abortion behemoth is mammograms, which in fact Planned Parenthood does not even offer, instead referring clients to health care providers that do.

“What these graphics put into pictures is what the data has been telling us for a long time,” said Casey Mattox, senior counsel for Alliance Defending Freedom in a report from The Daily Signal. “Planned Parenthood is really a small part of the national health care picture in America.”

The debate over the validity of the abortion giant's claim to be an essential provider of health care for women in the U.S. and whether the nation's taxpayers should be funding its business at all has heated up in the weeks since some of its leadership has been shown on undercover videos bartering in the sale of tissue and body parts from children aborted at its facilities.

Planned Parenthood has also been exposed in the videos as having stolen fetal remains of children it has aborted without their mothers' consent, targeting particular abortion techniques to best procure body parts, and using the controversial partial-birth abortion procedure to secure intact body parts, all in violation of federal law.

The revelations prompted renewed calls for defunding and investigation of the abortion business.

While several states have moved to defund Planned Parenthood individually, the Obama administration has defended the abortion chain and made threats claiming the states could be in violation of federal law with the same argument that Planned Parenthood is a necessary provider of “health care,” while also pledging to oppose any defunding effort at the national level and insisting that the abortion provider has abided by the law in its obtaining fetal remains from the children it aborts.

An August 3 attempt by the U.S. Senate to defund the abortion business failed, with Planned Parenthood's reliable defenders among the senators immediately lining up to condemn the effort.

“Tonight's effort in the Senate is no surprise from Congressional Republicans who have perpetuated a relentless assault on women's health,” Democrat Representative Nancy Pelosi said in a statement. “Tonight, once again, Republicans attempted to make it dramatically harder for women to access the comprehensive health care they need.

“Planned Parenthood clinics are often one of the few affordable health care options for many women,” she continued, “providing life-saving preventive care for millions of underserved women every year – including essential cervical cancer and breast cancer screenings.”

“Planned Parenthood is the primary health care provider for millions of American women, and nearly 80 percent of its patients are low-income,” Democrat Senator Dianne Feinstein said in a statement. “Many live in communities with few options to access basic health care services like breast exams, cervical cancer screenings and contraception.”

The one thing Planned Parenthood performed a greater number of was abortions: 327,653 to the health centers' zero.

Professor of Health Law and Policy at George Washington University Sara Rosenbaum said health care doesn't work that way, referring to the map of existing clinics that could step in if Planned Parenthood were to be defunded. She said as well that removing points of access for contraception would result in more unplanned pregnancies and abortions.

After Texas defunded Planned Parenthood in 2012, Rosenbaum said, health care centers increased their services, but the number of patients served dropped in the meantime.

Mattox countered that the drop in Medicaid and contraceptive claims could well have been evidence that the state cleaned up a lot of false claims, as Planned Parenthood was paying $4.3 million at the time to settle a federal civil lawsuit against it for fraudulently billing Medicaid for women's health care “services” from 2003-2009.

He also said more people could have been enrolling in employer-provided health care plans and cited the advent of Obamacare, which “compelled free coverage of contraceptives.”

“It seems some of our friends on the left conveniently forget that they created Obamacare and compelled free coverage of contraceptives when that is inconvenient to defending the need for Planned Parenthood,” Mattox said.

Also pertinent in Texas since the state defunded Planned Parenthood, the pregnancy rate stayed just about the same from 2012 to 2013, but abortions dropped during the same period of time, down to 61,513 from 65,547.