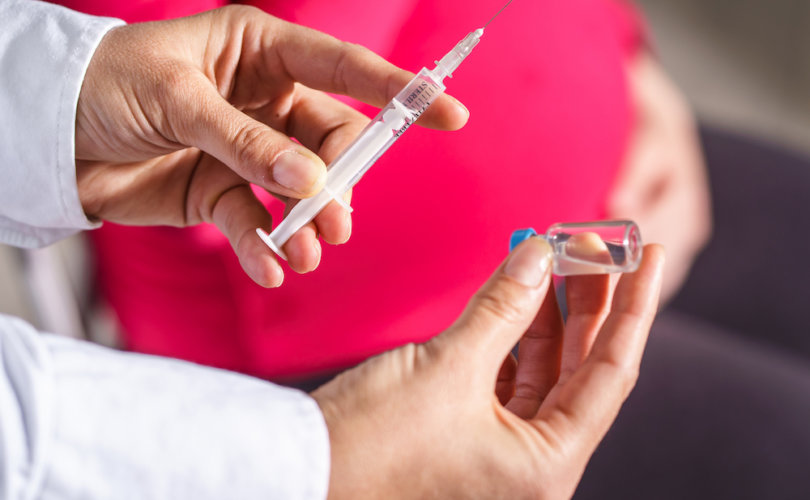 OTTAWA (LifeSiteNews) – According to data from Canada’s National Advisory Committee, expectant Canadian mothers are far more likely to shun the experimental COVID injections, which have been linked to an increase in miscarriages.

As reported by Blacklock’s Reporter, unpublished data from the government report titled “Updated Guidance On Covid-19 Vaccines For Individuals Who Are Pregnant Or Breastfeeding” said the “uptake of Covid-19 vaccine has been lower among pregnant people compared to non-pregnant people in Canada.”

The report, which used the woke term “pregnant people” instead of pregnant women, said that the preliminary data shows that in Ontario, “primary series vaccine coverage among pregnant people, 71 percent, was 16 percentage points lower than in the general female population of reproductive age.”

The report also noted that pregnant mothers were less likely to take flu shots as well. Only 45 percent of women, pre-pandemic, opted for the flu jabs, according to 2020 statistics.

According to the committee, it has said since January 28 that pregnant women, as well as those who are nursing, should take the COVID booster shots, claiming there are no harm to moms or their children and that the jabs are “safe.”

However, even official Public Health Agency of Canada (PHAC) data demonstrates the now well-known link, as noted by Dr. Joseph Mercola, between the mRNA COVID jabs and stillbirths, low birth weight, and miscarriages.

According to PHAC, there were 91 miscarriages along with what is known as “spontaneous abortions” after pregnant women got the jabs. This was from data that documented a total of 370 deaths from the COVID shots.

As stated by Dr. Mercola in a recent report, “Pfizer court-ordered, released data — which the U.S. Food and Drug Administration wanted to hide for 75 years — reveals the miscarriage rate among women whose pregnancy outcomes were known was 87.5%.”

“The true rate may be higher or lower, as Pfizer did not record or report pregnancy outcomes for 238 of the 274 women known to be pregnant during the trial,” noted Mercola.

According to the U.S. Vaccine Adverse Event Reporting System (VAERS), its database shows there have been a total of 4,941 miscarriages that happened after COVID-19 jabs.

Noted Mercola, “for comparison, the fetal death reports for all other vaccines reported to VAERS in the last 30 years is 2,239.”

Mercola also noted that birthrates worldwide are also falling, “suggesting the COVID-19 jabs are having an adverse impact on future fertility as well,” and many women have reported menstrual cycle irregularities.

The COVID jab trials have never produced evidence that vaccines stop infection or transmission. In fact, evidence suggests that the jabs no longer even reduce severe symptoms, especially considering the ever-changing viral variants and that they are harming more people than helping.

Official data shows that only 12.41 percent of Canadians have opted to get a fourth “booster” jab.

Just recently, advisers to Health Canada recommended Canadians take a “booster” of the still experimental COVID injections, which are now known to do next to nothing to stop the spread of the virus, every three months.