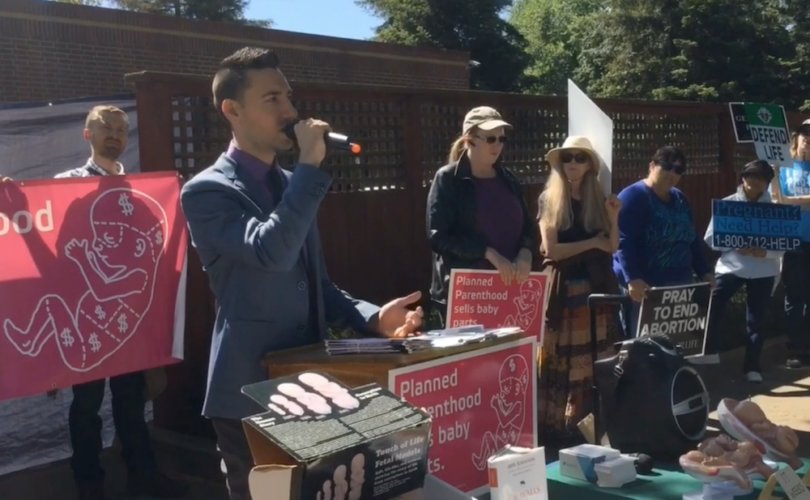 SACRAMENTO, April 25, 2016 (LifeSiteNews) – At hundreds of rallies this weekend, speakers called for the defunding of Planned Parenthood and the exoneration of David Daleiden.

But at a protest in Sacramento on Saturday, Daleiden himself took the microphone and revealed new details of his court case, his goal, and the day that California agents raided his Orange County apartment to confiscate all his undercover footage of Planned Parenthood, including scenes that had never seen the light of day.

The 27-year-old investigator said the day that California Attorney General Kamala Harris sent agents to his doorstep “started out a day like any other…except like it was 1984.”

He had been preparing a lunch of chicken with garlic and onions and walked outside to throw away his trash.

“There's a big white, unmarked van sitting in the parking lot,” he said. Then a man asked him if he was David Daleiden. Upon learning that this was the chief investigator of the Center for Medical Progress, the agent replied, “I'm with the California Department of Justice. We have a warrant to search your home.”

That did not surprise Daleiden one iota.

“I was ready for it. And at this point, I'm really ready for whatever they throw at us next,” he said. “It just comes with the territory.”

He understands that, for Harris, the raid is “ not personal; it’s professional. Her campaign has taken a lot of money from Planned Parenthood.”

Daleiden said he had retained Steve Cooley as legal counsel. Cooley, a Republican who served 12 years as Los Angeles District Attorney, ran against Harris, a Democrat, for the position of California Attorney General in 2010, but lost – in part, thanks to donations from Planned Parenthood.

Daleiden faces criminal charges in Texas and civil lawsuits in California, apart from whatever charges Harris or the U.S. Justice Department may file. But he said he finds the experience animating.

“I feed on the energy of the courtroom,” he said.

And that energy would give him the resolve to carry through the court proceedings, civil or criminal.

“I promise you, we're never going to settle with Planned Parenthood or StemExpress or the abortion industry,” he said.

Instead, he will use it to expose what he learned and, one day, see the nation's largest abortion provider indicted for illegally trafficking in human organs.

“It's going to be the biggest mistake they've ever made, bringing these lawsuits,” he said, “because it will bring their entire baby body parts program into the light of the law.”