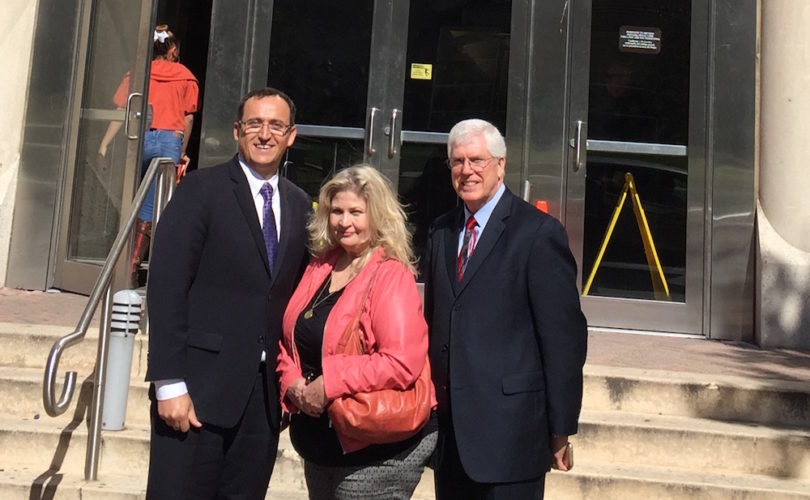 Sign the petition to Harris County urging them to drop the charges against David Daleiden and Sandra Merritt.

Liberty Counsel has assembled a highly qualified legal defense team, including Dan Cogdell and Chris Downey, both from Houston. Chris was a former District Attorney. Dan has successfully handled many high-profile criminal cases, including ENRON, a person with the Branch Dravidians, and more. Dan has been repeatedly recognized as one of the nation's leading criminal defense lawyers.

A crush of media was present today. After the court appearance the legal team addressed the media with Sandra present.

Mat Staver, Founder and Chairman of Liberty Counsel, and Harry Mihet, Chief Counsel for Liberty Counsel, was with her today. Mat Staver said, “Sandra did nothing wrong. The indictment against her is weak, and the discovery will reveal why she will prevail. Sandra has revealed to the world the brutality that occurs in Planned Parenthood abortion centers. She should be applauded for her courage, not indicted. We shall prevail because Sandra did not break any laws.”

Staver told LifeSiteNews it was unusual that at the first appearance on a felony indictment there was an offer to drop the charge to a misdemeanour. It  underscores, he said, “the weakness of the indictment.”

Sandra is scheduled to reappear in court on March 28. In the meantime, Liberal Counsel's legal team has already filed motions for discovery.