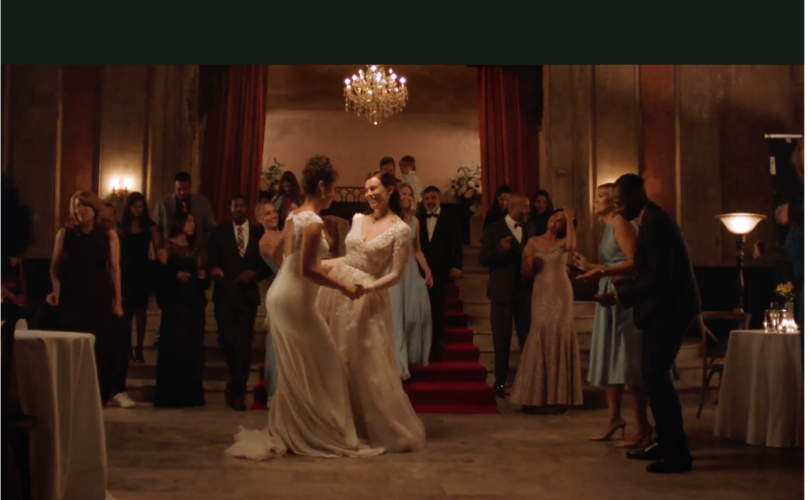 CONSHOHOCKEN, Pennsylvania, January 3, 2019 (LifeSiteNews) — The largest wedding retailer in the United States is “rewriting the rules” with a new marketing campaign showing for the first time in company history a same-sex couple in a television ad.

“We wanted to make sure this spot represented what we see from brides today,” David’s Bridal chief marketing officer Liz Crystal said. “We value every type of bride.”

The ad campaign includes a TV spot featuring non-traditional brides, showing a female couple and also a bride and groom holding their baby during the wedding ceremony.

In the ad, the female couple is seen dancing in wedding dresses, presumably at their wedding reception, before a male guest cuts in to dance with one of the brides.

David’s debuted the marketing campaign this week, according to a report from the industry news outlet Ad Age.

In the past, David’s ads focused more on the dresses and the customer experience in its stores and less on who is getting married, Crystal said. The thought of rewriting the rule with the campaign is meant to promote the company’s product offerings for brides, she said.

David’s was founded in 1950 and has approximately 300 stores in Canada, Puerto Rico and the United Kingdom.

The advertising campaign follows the bridal retailer having filed Chapter 11 bankruptcy in November.

David’s said at the time that it had no plans to close stores or liquidate inventory, and pending orders and bridal appointments would not be affected.

The analytics company Moody’s downgraded the bridal business’s ranking from stable to negative in February 2017, The Washington Post reported. Moody’s cited the “casualization” of gowns and bridesmaid dresses as a primary factor.

The chain has been struggling recently and under pressure to lower its prices, according to Business Insider, with other stores offering less expensive bridal merchandise due to a shift by millennials away from traditional weddings for more casual, lower-priced weddings and gowns.

David’s and other traditional bridal companies also face competition from direct-to-consumer wedding startups and new models that can deliver dresses in days where the established retailers have taken months.

The bridal chain is not the first to market same-sex couples, the Ad Age report noted. It followed the lead in recent years of companies such as Kohl’s, Tiffany & Co., Wells Fargo and Zales.

The article also said same-sex weddings had boosted the national economy by about $1.6 billion and state and local tax revenues by $102 million in the year after the June 2015 Obergefell U.S. Supreme Court decision legalizing same-sex “marriage.” The stats came from a 2016 report from the Williams Institute on Sexual Orientation and Gender Identity Law and Public Policy, a UCLA School of Law think tank.

It did not mention whether the financial increase was maintained in the years that followed or if since 2016 it had fallen off.

David’s Bridal is investing more this year than the $15 million it spent on measured media in the U.S. in 2017, Crystal said.

Its campaign including the same-sex brides will appear in a series of 15- and 30-second TV ads, along with shorter and longer digital videos, that will run on social media and radio as well.

As with previous campaigns, the spots will air during the critical first-quarter period known as “Bridal Christmas,” Ad Age’s report said, when most brides are looking for their gowns. But in a departure from previous years, David's will continue the media campaign into the second quarter.