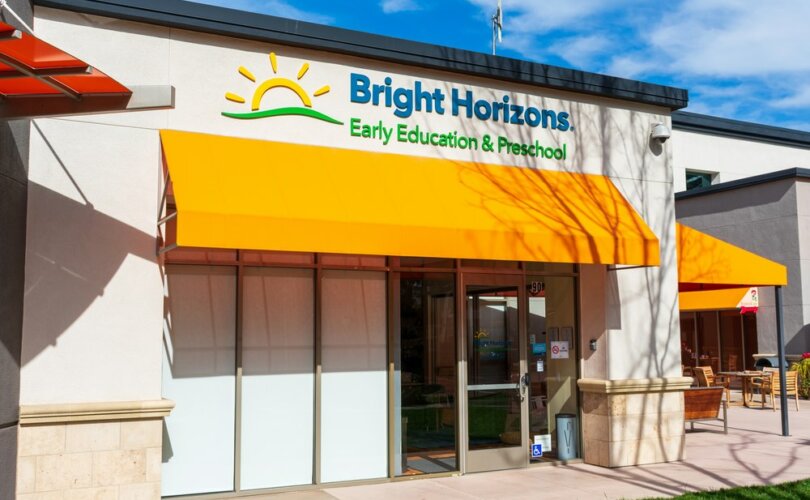 LOS ANGELES, California (LifeSiteNews) – A national daycare chain allegedly fired a devout Christian employee for refusing to push LGBT propaganda on kids as young as one, according to a recently filed lawsuit.

On October 13, the Thomas More Society announced the lawsuit against Bright Horizons Children’s Center for violating the religious freedom rights of its former employee Nelli Parisenkova.

Parisenkova had politely asked to be excused from reading homosexual propaganda children’s books because of her sincere religious belief in the sanctity of Biblical marriage. However, a lesbian director forced her out of her job and refused to give her an accommodation in April of this year, the lawsuit alleges.

Parisenkova’s supervisor at the time allowed her to be excused from reading those books. She could pick other books to read or work with the kids to pick a different activity – this accommodation sufficed for four years.

But one day the plaintiff asked to remove five books from the shelf that contained LGBT messages so that kids would stop asking if she could read them. The lawsuit alleges that instead of working to find a solution, Katy Callas, the director of the center and a homosexual, “questioned her in an irate manner,” told Parisenkova she had to “celebrate diversity” or leave, and eventually expelled her from the building and forced the devout Christian to walk 20 minutes in 96-degree weather and wait another 45 minutes for transportation.

The daycare center is on the grounds of Comcast NBC Universal studios, so an Uber driver could not make it to the location itself, but had to wait outside a gate.

The company then “issued a counseling memo with false statements, terminated her life-insurance benefits, required her to complete retraining in diversity issues, and encouraged her to resign her position.”

“Ms. Parisenkova could not return to work without an accommodation; so, Bright Horizons terminated her employment,” the lawsuit states.

Accommodating Ms.Parisenkova’s religious beliefs would impose almost no burden on Bright Horizons. There were always other employees available who could read the books instead of Ms. Parisenkova. Bright Horizons and Ms. Callas treated Ms. Parisenkova like a criminal, harassed her, and terminated here after four (4) years of faithful service. This treatment was despicable.

The Thomas More Society said this shows not just discrimination but also indoctrination.

“Make sure you know what books are on the shelf in your children’s care programs and schools. This is a clear-cut case of one of the largest childcare employers in the country having anti-religious workplace policies that promote indoctrination of young children with the LGBT agenda,” Thomas More Society attorney Paul Jonna said in a statement sent to LifeSiteNews.

LifeSiteNews contacted the corporate office for the childcare centers on Tuesday morning and asked for comment on the lawsuit and to detail what specific training the company gives its employees on religious accommodations and their legal responsibilities. LifeSiteNews has not received a response as of press time.

LifeSiteNews also contacted NBC Universal’s western media representatives to ask if the company ensures contractors and entities on its grounds follow all state and federal laws and if it planned to look into the situation, but also received no response.