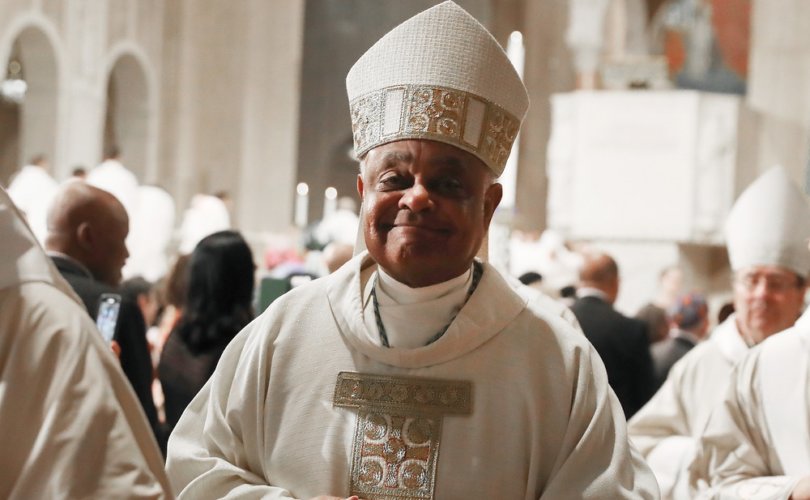 WASHINGTON, D.C., June 24, 2020 (LifeSiteNews) – Archbishop Wilton D. Gregory of Washington, D.C. made the claim, contrary to Christian teaching, that a person’s “human dignity” begins at birth. He said this to Associated Press in comments linking racial justice to pro-life advocacy.

“Birth is only the first moment of a person’s human dignity, which is never lost throughout the journey of life,” Gregory stated in an email, according to the Associated Press.

The Catechism of the Catholic Church teaches that human life, and thus a person’s human dignity, begins with conception.

“Human life must be respected and protected absolutely from the moment of conception,” the Catechism states. “From the first moment of his existence, a human being must be recognized as having the rights of a person – among which is the inviolable right of every innocent being to life” (CCC 2270).

LifeSiteNews reached out to the Archdiocese of Washington for clarification. Paula Gwynn Grant, the archdiocese’s secretary of communications, said that “Archbishop Gregory’s full statement makes clear that respect must span the seamless garment of life from conception to natural death and underscores that the challenges we are facing now present a blessed moment for men and women across racial and cultural differences to align justly and collaboratively to create a more equitable way of living together.”

The “seamless garment” theory that sees issues such as intrinsic evils like abortion as morally equivalent to societal ills like poverty was championed by the late Cardinal Joseph Bernardin.

“A consistent ethic of life does not equate the problem of taking life (e.g., through abortion and in war) with the problem of promoting human dignity (through humane programs of nutrition, health care, and housing),” Bernardin had said in 1984.

“But a consistent ethic identifies both the protection of life and its promotion as moral questions. It argues for a continuum of life which must be sustained in the face of diverse and distinct threats,” he added.

“Each of the issues I have identified today – abortion, war, hunger and human rights, euthanasia and capital punishment – is treated as a separate, self-contained topic in our public life,” according to the cardinal. “Each is distinct, but an ad hoc approach to each one fails to illustrate how our choices in one area can affect our decisions in other areas. There must be a public attitude of respect for all of life if public actions are to respect it in concrete cases.”

Some veteran pro-life activists say that those championing the “seamless garment” approach actually focus far more on issues like fighting poverty and war than they do on abortion.

The Church teaches that abortion, euthanasia, embryonic stem cell research, cloning, and same-sex “marriage” are intrinsically evil, but that issues like how to best address poverty, immigration, or taxes are matters of prudential judgement.

During a speech to members of the Christian Democrats in Europe in 2006, Pope Benedict XVI had named three such principles, the first of which was the “protection of life in all its stages, from the first moment of conception until natural death.”

He did not mention racism at all. Instead, the Pope listed the “recognition and promotion of the natural structure of the family – as a union between a man and a woman based on marriage – and its defense from attempts to make it juridically equivalent to radically different forms of union which in reality harm it and contribute to its destabilization, obscuring its particular character and its irreplaceable social role.”

Lastly, Benedict XVI stressed that “the protection of the right of parents to educate their children” is not negotiable.

Gregory’s statement that “birth is only the first moment of a person’s human dignity, which is never lost throughout the journey of life,” wouldn't “surprise me,” says Dan Becker, who was active with Georgia Right to Life (GRTL) for 17 years, the last seven as its president.

Gregory’s tenure as archbishop of Atlanta from 2005 to 2019 was a disaster for Georgia’s pro-life movement, Becker told LifeSiteNews.

“We had a particular problem with Archbishop Gregory. In fact, I charge him before the Lord with sowing disunity in the pro-life movement here in the state of Georgia,” he said.

In 2013 Americans United for Life recognized Georgia as an “Allstar Most Protective” state for its many pro-life successes.

“These successes came by working together—Catholics and Protestants together for life,” Becker said.

“We had an annual march known as ‘Together for Life’ for 40 years together, and Archbishop Gregory destroyed that by removing all of the Catholics from the march and demanding that they attend his competing march down the road,” he told LifeSiteNews.

This also destroyed the “unity and effectiveness” of Georgia's pro-life movement and put Catholics, who were more than half of the GRTL chapter leaders, in the “very bad place” of having to chose between Gregory’s leadership and their pro-life advocacy.

More significantly, the Catholic archbishop was “never a fan of our ‘no exceptions’ legislation and he ended up undermining our political capital in the Georgia legislature with compromise legislation,” Becker told LifeSiteNews.

Georgia had achieved the “remarkable,” in that all seven of its elected state-wide constitutional offices were held by politicians who backed pro-life legislation that did not allow exceptions in the case of pregnancies that resulted from rape or incest.

“As soon as Archbishop Gregory backed a compromised position on life, which he did, the politicians took the easy route,” Becker said. “And that was the end of working together to protect the most vulnerable children facing death by abortion.”

Instead, Gregory instructed his people to back the newly formed National Right to Life affiliate that allowed for rape and incest exceptions, Becker told LifeSiteNews.

“It was our unity that provided a solid front against the pro-death forces up at the Capitol. That unity allowed us to save 100 percent of the babies facing death by abortion,” he said.

“That is no longer the case,” added Becker. “Although Archbishop Gregory departed for Washington in 2019, his legacy will be hard to repair.”

Gregory and the LGBT cause

Archbishop Gregory, in spite of Pope Benedict’s list of principles that Catholics cannot compromise, has repeatedly shown his support for the homosexual agenda. In 2019, Gregory told a female who identifies as a man and who claims to be a practicing Catholic that as a transgender person she belongs to the “heart” of the Church and fits right in “the family.”

He repeatedly encouraged a continued civilized discussion of the issue. “The decision has offered all of us an opportunity to continue the vitally important dialogue of human encounter, especially between those of diametrically differing opinions regarding its outcome,” he added.

However, in 2003, when John Paul II was Pope, Gregory, as president of the United States Conference of Catholic Bishops, spoke out strongly against homosexuality when the Supreme Court ruled Texas’ sodomy laws unconstitutional. He even said their decision effectively declaring a constitutional right to sodomy should be “deplored.”

“In its decision, Lawrence vs. Texas, the Supreme Court has chosen to view homosexual behavior between consenting adults as a matter of privacy,” Gregory said in a statement preserved on the Gay & Lesbian Archives of the Pacific Northwest website from the early 2000s. “However, human sexuality cannot be viewed this way. Sexual activity has profound social consequences which are not limited to those immediately engaged in sexual acts. For this reason, the larger society has always shown a concern about what is and is not acceptable in sexual behavior between individuals.”

“The Catholic Church teaches, in agreement with other faith traditions and with what were once the norms generally accepted by society, that sexual activity belongs to the marital relationship between one man and one woman in fidelity to each other,” he said. “This relationship is the basis of the family which is the basic unit of society. Respect for the purpose of human sexuality and the family needs to be reaffirmed in our society; and anything which reduces respect for them—such as yesterday’s Supreme Court decision—is to be deplored.”

Gregory also praised a Vatican document declaring that “legal recognition of homosexual unions would obscure certain basic moral values and cause a devaluation of the institution of marriage.”

He commented that establishing a legal equivalence between marriage and homosexual relationships “not only weakens the unique meaning of marriage; it also weakens the role of law itself by forcing the law to violate the truth of marriage and family as the natural foundation of society and culture.”

“Catholic politicians, in particular, must oppose such laws when they are proposed,” he said.

As Archbishop of Atlanta, Gregory invited pro-homosexual Jesuit Father James Martin to speak in his archdiocese.

Archbishop Gregory recently made headlines for issuing a stinging rebuke to the John Paul II National Shrine for “allow[ing]” President Trump and First Lady Melania Trump to go through with a long-planned visit the day after Trump infuriated liberals by standing outside of St. John’s Episcopal Church with a Bible. The church had been set on fire the night before. Many in the media falsely claimed that the protestors outside St. John’s had been teargassed rather than pepper sprayed to clear the way for the president.

The Shrine, the statement added, “welcomes all people to come and pray and learn about the legacy of St. John Paul II.”

In 2019, Gregory offered a funeral Mass for the repose of the soul of pro-abortion journalist Cokie Roberts. Pro-abortion, pro-homosexual Speaker of the House Nancy Pelosi gave a eulogy from the lectern in Washington, D.C.’s Cathedral of St. Matthew the Apostle as the archbishop looked on.

In a statement signed by Gregory and the other bishops in the state of Maryland, including Archbishop William E. Lori of Baltimore, the leaders argue that “prayer and dialogue, alone, are not enough. We must act to bring about true change.”

The letter did not mention abortion, for which black babies are disproportionately targeted, or the breakdown of the family and high rates of fatherlessness.

The bishops wrote that “Over the years, the Catholic Bishops of Maryland have stood firmly in our support of laws that sought to bring about justice and an end to unequal treatment based on race.”

At the same time, they appeared to confess the sins of other Catholics. “We vividly recall our own Church’s past sins and failings and admit to them freely,” they said.

The bishops then proceeded to list the trailblazing achievements of Catholics for the black community, including the Mother Mary League which founded “the first Catholic school for Black children in the United States, in Baltimore in 1828.”

Lianne Laurence contributed to this report.