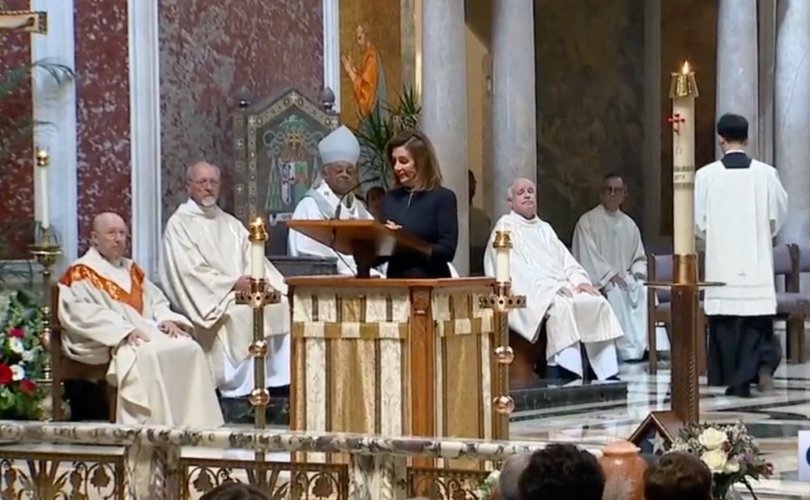 WASHINGTON, D.C., September 27, 2019 (LifeSiteNews) – Archbishop Wilton Gregory offered a funeral Mass for pro-abortion journalist Cokie Roberts on September 21 at the Cathedral of St. Matthew the Apostle, praising her in his homily as an “extraordinary, professional servant of the truth.”

The left-wing commentator “believed in God's word…accepted it and fashioned her life around that word,” said Gregory.

Pro-abortion House Speaker Rep. Nancy Pelosi, D-CA, delivered a eulogy from the lectern in the cathedral sanctuary during which she called Roberts a “national treasure.”

Cokie Roberts and her husband Steve Roberts had a long-running influential column, which they used to ridicule pro-life advocates as “extremists.” The two referred to the federal ban on partial-birth abortion as “off the track” and “cynical game-playing” on the part of pro-life activists. Partial-birth abortion is a method of late-term abortion that involves delivering a baby feet first until all but his head has exited the womb and then stabbing scissors into the base of his skull and sucking his brains out. The U.S. Supreme Court ultimately upheld the ban on that particular method of late-term abortion; other methods remain legal across the U.S.

The Supreme Court’s upholding of the partial-birth abortion ban was “offensive as a woman,” she said on ABC News in 2007. Roberts was highly critical of Pope Benedict XVI, accusing him of “really lacking in the theological virtue of charity,” being “an extremely controversial choice” as Pope, and “the most conservative voice of Catholicism.”

Roberts “used her own words so exquisitely,” said Archbishop Gregory. “She spoke often about the influence of God's word in her life, about the Church that she loved.”

“We grieve this day and will grieve for a great many days to come, because a woman of faith has touched us, loved us, and taught us,” he continued. “And who has been taken from us. We saw clearly in Cokie many of the expressions of the gifts of the spirit that St. Paul described in the second reading this morning. She was, for so many, a wise woman of faith. She called us to be our better selves and she was quick to point out when we behaved as our lesser selves.”

He went on to praise Roberts as someone who “attempted to heal conflicts and occasionally made people realize how childish we were acting in the midst of our incessant squabbles” and “challenged people of all ideological persuasions to listen to one another more attentively.”

The pro-abortion journalist “taught men and women to recognize and to rejoice in the dignity of their identity as human beings,” the arhcbishop said. “She challenged all of us to work together for the building up of this nation, and of our Church. And for the increase of everyone. She was unafraid of bishop or political figure. And she delighted in letting both know that fact. Her faith and determination to improve the Church she loved and the nation she’s cherished – she cherished accomplished great good for us as individuals and as institutions.”

“It's as if [Catholic bishops] are asking to be ignored” because of the Church’s teachings on sexuality, Roberts wrote in another joint syndicated column.

“We may perhaps seem to feel that somehow our loss questions Christ's presence, His care, His understanding of what we must all now feel. How quick would Cokie perhaps to be to remind us of that presence, especially in moments of sorrow and anguish, when we need to be together in hope and trust that God's providence and wisdom are not compromised, nor are they absent,” suggested Gregory.

Prayer intentions at the Mass included that people be “inspire[d]” to “follow her [Cokie’s] example, to put others ahead of self, to live a true Christian life and always offer a hand and a heart to those in need”; “for the children of the world who she cared so deeply about, especially those facing poverty, sickness, and hunger”; and “for all those who struggle for justice and liberty.”

The Catholic Standard, the newspaper of the Archdiocese of Washington, ran a glowing article on the funeral that did not mention Roberts’ pro-abortion, left-wing views or the fact that eulogies are not in the rubrics of the funeral Mass and the politician who delivered this one has spent decades advancing the pro-abortion cause while touting her “Catholic” faith.

“Unless they gave some signs of repentance before death, the following must be deprived of ecclesiastical funerals: notorious apostates, heretics, and schismatics; those who chose the cremation of their bodies for reasons contrary to Christian faith; other manifest sinners who cannot be granted ecclesiastical funerals without public scandal of the faithful,” Canon 1184 of the Code of Canon Law states. “If any doubt occurs, the local ordinary is to be consulted, and his judgment must be followed.”

Mrs. Roberts' canonization-style homily by +Gregory shows that in today's Church, you can publicly support abortion, dissent from Church teaching, cheerlead for gay marriage, and still get a full Cadillac Catholic funeral from your Archbishop. And may she rest in peace. https://t.co/sItw8Tqd28

The Archdiocese of Washington did not respond to a request for comment.